Most Americans Are Now Losing to Inflation

As Iran heads to a presidential election on June 18, its economy is a shambles. There’s a partial solution -- if its rulers are interested.

With Iran’s upcoming presidential election on June 18, it’s time to determine whether Iranians are “miserable” or “happy.” After all, the public’s state of mind always colors public opinion. In the economic sphere, misery tends to flow from high inflation, steep borrowing costs, and unemployment. The surefire way to mitigate that misery is through economic growth. All else being equal, happiness tends to blossom when growth is strong, inflation and interest rates are low, and jobs are plentiful.

Many countries measure and report these economic metrics regularly, and comparing them, nation by nation, can tell quite a bit about the state of important global economic sentiments. Is Iran, for example, more or less miserable than other countries? Hanke’s Annual Misery Index (HAMI) gives us the answers.

The first misery index was constructed by economist Arthur Okun in the 1960s to provide President Lyndon Johnson with an easily digestible snapshot of the U.S. economy That original misery index was a simple sum of a nation’s annual inflation rate and its unemployment rate. The index itself has been modified several times, and its coverage has been greatly expanded, first by Robert Barro of Harvard, and then by me.

My modified misery index is the sum of the unemployment, inflation, and bank‐lending rates, minus the percentage change in real GDP per capita. Higher readings on the first three elements are “bad” and make people more miserable. These “bad” measurements are offset by a “good” (real GDP per capita growth), which is subtracted from the sum of the bads. A higher HAMI score reflects a higher level of misery.

Where, then, does Iran rank? Of the world’s 156 countries that I cover in the HAMI, Iran ranks as the eighth-most miserable country in the world, behind Venezuela, Zimbabwe, Sudan, Lebanon, Suriname, Libya, and Argentina.

The symptoms of Iran’s misery are as clear as the nose on your face. Since January 2020, the Iranian rial has lost 45 percent of its value against the U.S. dollar. As shown in the table below, there are only seven countries whose currencies have lost more than Iran’s. 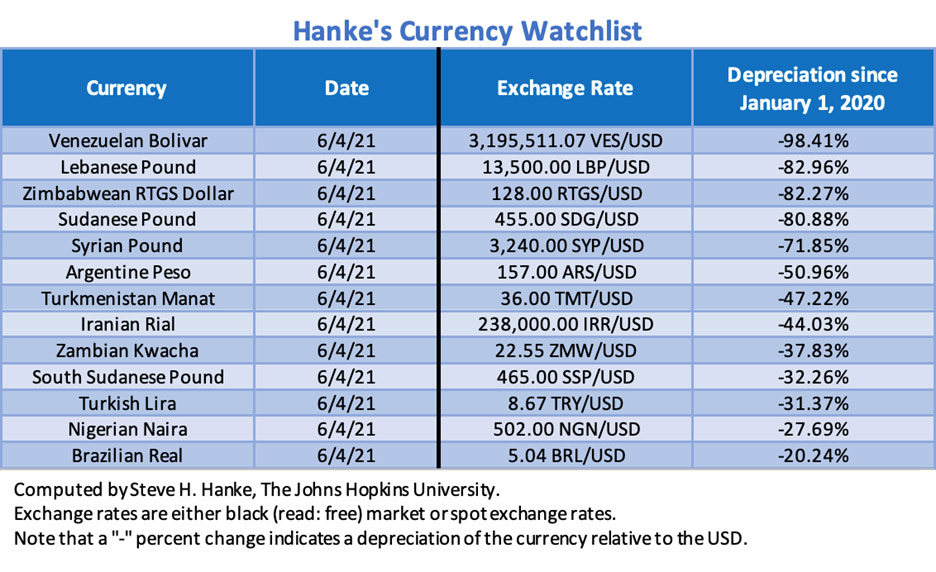 The best option to bring an end to Iran’s misery is a currency board. A currency board issues notes and coins convertible on demand into a foreign anchor currency at a fixed rate of exchange. It is required to hold anchor-currency reserves equal to 100 percent of its monetary liabilities.

What’s more, it requires no preconditions and can be installed rapidly. Government finances, state-owned enterprises, and trade need not be reformed before a currency board can issue money. They have existed in some 70 countries since 1849. None have failed.

As the one who designed the currency boards in Estonia (1992), Lithuania (1994), Bulgaria (1997), and Bosnia-Herzegovina (1997), I can attest to the fact that they work perfectly to create stability. And while stability might not be everything, everything is nothing without it.

The Democrats’ Appalling Vote to Kill the Hyde Amendment

They are deadly serious about enacting a policy of unlimited taxpayer funding of abortion — and are close to having the power to do it.
The Editors

Europe on the Verge of a Revolutionary Breakthrough

Patrick Wyman’s book is a compelling historical narrative of Europe from 1490 to 1530, shot through with colorful stories about people and politics.
Razib Khan

Debauchery and disrespect run rampant at the Olympics, and we should not tolerate it.
Aron Ravin

Rich Lowry
Biden is the Olympic badminton competition after a WWE match; he’s elevator music after a heavy-metal concert; he’s the sparkler after a fireworks display.

Jim Geraghty
The CDC calculates the risk of symptomatic reinfection among vaccinated people is roughly one in 4,628.
View More
Loading...