Why investors are predicting moderate inflation.

June’s Consumer Price Index release saw annualized four-month inflation of 9.2 percent. It would seem fixed-income markets ought to have panicked, with long-term Treasury bonds yielding around 2 percent, yet they rallied following the announcement with long-term Treasuries gaining in price as yields fell. Even as inflation soared to the highest levels since before the Great Financial Crisis, expected future inflation didn’t budge, as measured by financial-market “breakevens,” the difference between regular and inflation-adjusted Treasury bonds. Currently, breakevens indicate that inflation is expected to average 2.19 percent over the next 30 years, and these rates have been inflated by Federal Reserve purchases of inflation-adjusted securities. The Cleveland Fed’s more sophisticated and accurate measure of financial-market inflation expectations pegs ten-year future inflation at just 1.61 percent.

How can that be in the face of the recent 9.2 percent rate? Have the financial markets gone crazy? What about the Fed which, in the face of skyrocketing inflation figures, while keeping options open, keeps maintaining that the price burst is “transitory?”

There are three major explanations for the current elevated figures, each of which supports the financial market and Fed outlook.

The first factor is the distortion caused by “base effects.” Comparison with last year’s depressed pandemic figures overstates this year’s change. This is avoided by looking at two-year inflation rates with 2019’s normal economy as a base. These rates, measured with the Fed’s preferred price index for Personal Consumption Expenditures, appear in the chart below. 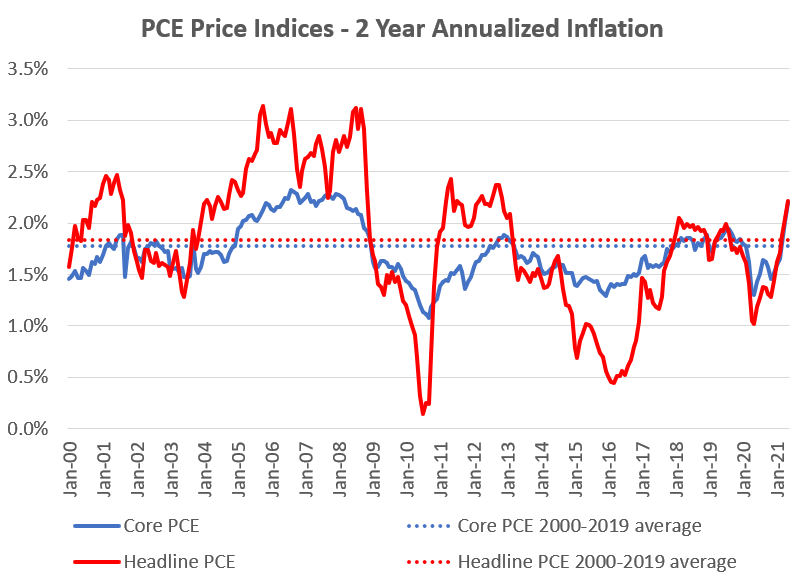 The chart shows data for both the “headline” measure of all expenditures and the “core” measure that excludes volatile food and energy prices. Current figures of 2.2 percent for each are a few tenths above 20-year averages, near the top of ten-year ranges. After adjusting for the “base effect,” each figure is high, but neither is extreme.

The second major factor affecting current high inflation is the decline in the foreign-exchange value of the dollar, which since March 2020 has fallen 8 percent, measured by the Federal Reserve’s broad trade-weighted index. Changes in the dollar’s value are closely tied to variations in the U.S. inflation rate, as depicted in the following chart, which compares changes in the average dollar foreign exchange level to headline PCE inflation. 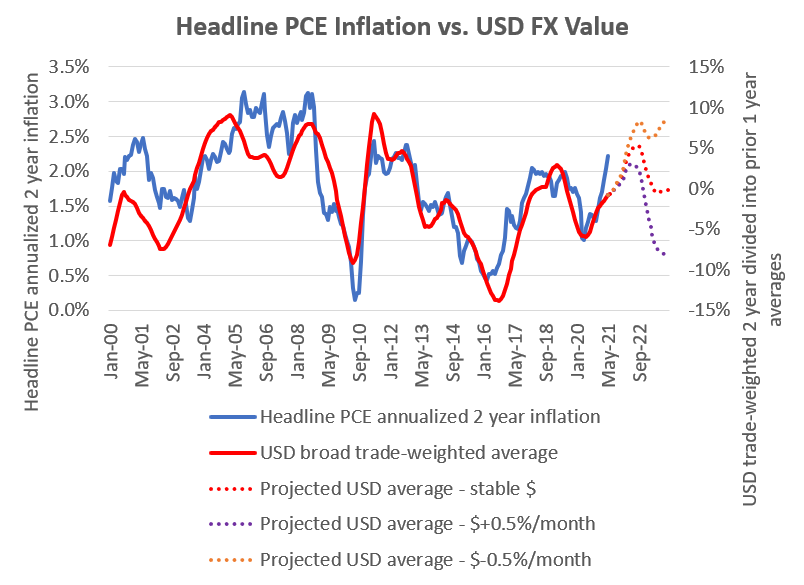 While the future path of the dollar’s value is unknown, the chart compares scenarios with a stable dollar and appreciation or depreciation at the recent rate of 0.5 percent per month. A stable dollar has inflation returning to the Fed’s 2 percent target by early 2023, while dollar appreciation arrests inflation even sooner. Continued dollar depreciation produces increasing inflation. The Fed’s balance-sheet and interest-rate policies have important bearing on the dollar’s foreign-exchange value.

The preceding chart highlights the relationship between the dollar and inflation, but there is a large gap between current inflation figures and what the dollar’s foreign-exchange value indicates. The third major inflation factor is durable-goods supply-chain issues from the dramatic fiscal boost to consumption that is channeled to durable goods as a result of the service sector’s lockdown constraints. Since December 2019, before the pandemic, consumption of durable goods has risen over 30 percent. The jump is 66 percent from the pandemic trough in April 2020. Before December 2019, it took nearly five years for consumption of durable goods to grow 30 percent, so the pandemic compressed five or more years of growth into one.

Complicated supply chains for durable goods felt this strain, which was reflected in prices. The next chart displays PCE inflation for both durable and nondurable goods, along with services, and demonstrates that durables prices are driving the overall rate. 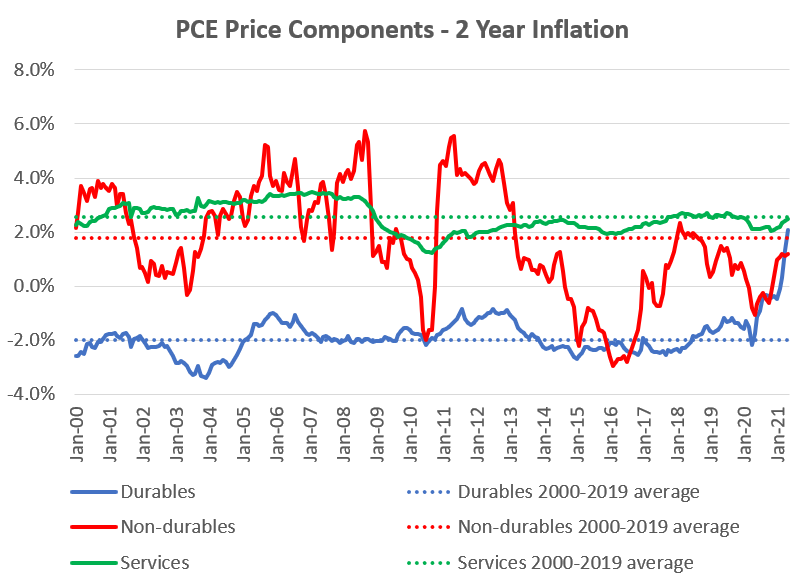 The relatively stable services sector has two-year inflation of 2.5 percent, a tenth below its long-term average. For the volatile non-durable-goods sector that includes food and energy, two-year inflation is 1.2 percent compared with its 1.8 percent 20-year average. Durables inflation is at 2.1 percent, well above its previously stable average of 2 percent deflation, accounting for all the gain in total inflation. Used-car pricing exemplifies durables price pressures. Pulled by a burst of demand from revived car-rental companies and a lack of trade-ins because new-car availability is limited by chip shortages, the sector alone accounts for over 40 percent of core CPI inflation for the past three months.

Future durables pricing depends on the path of durables consumption. For 20 years before the pandemic, services’ share of total consumption increased by about six percentage points while durables’ share fell by about three points. This trend is likely to resume with reopening. It’s also possible the recent durables boom came at the expense of future durables consumption as consumers accelerated their replacement of cars and appliances. Were durables demand to revert to its previous trend, it would fall 20 percent. May’s 3 percent decline in consumer durables expenditures may mark this reversion to trend. In either scenario, recent durables inflation should return to its past level or lower, bringing down overall inflation.

While the pandemic’s economic effect is without precedent, the closest comparable is the cataclysmic economic impact of the 2008 financial crisis. The chart below compares inflation during each event. 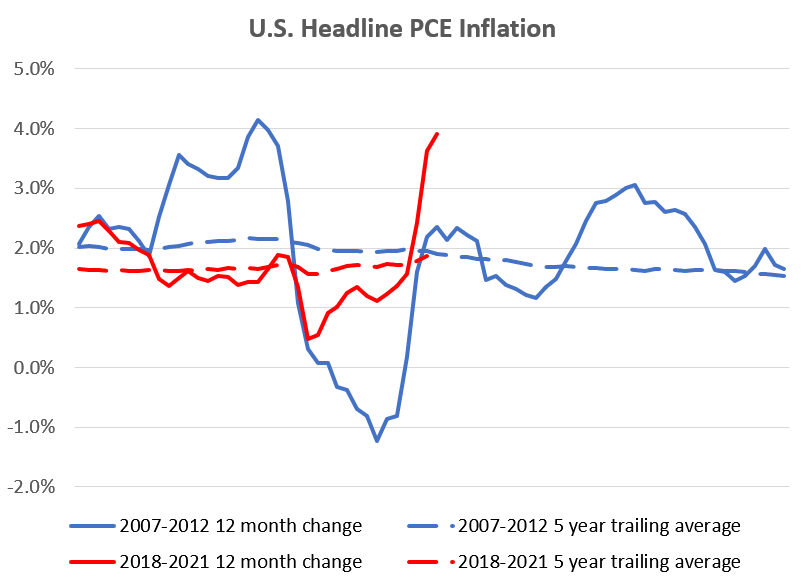 The pandemic has been more compressed and sharper than the 2008 crisis, but the pattern is similar of plunging inflation followed by sharp above-trend increases. Following the crisis, inflation reverted to its steady 40-year downtrend. The dollar’s foreign-exchange value and the durable-goods sector’s production difficulties are both subject to reversals, which indicates today’s high inflation figures may do the same. Recent CPI data notwithstanding, the markets view of future inflation is restrained, and the Fed’s benign long-term outlook is likely correct.