But will the countries it purportedly seeks to help?

As last week’s meeting of G-20 finance ministers in Venice, Italy, wrapped up, there was one big winner: the International Monetary Fund (IMF). Under the guise of assisting countries in their efforts to finance COVID-relief efforts, the IMF will issue $650 billion in special drawing rights (SDRs). That’s a whopping 120 percent increase in the stock of outstanding SDRs. These will be distributed to the IMF’s 190 member countries in proportion to their quotas.

SDRs are a reserve asset — a kind of “paper gold,” to use a self-contradictory description — created out of thin air by the IMF. They were first issued in 1969 when experts at the IMF feared that there would be a shortage of international reserves and a liquidity squeeze that would result in a worldwide deflation. As is often the case, though, the experts were wrong. Since 1969, there has been an explosion in world reserves via the accumulation of U.S. dollars by foreign countries. Contrary to the experts’ expectations, SDRs have proven to be unimportant in that respect.

But that hasn’t stopped the IMF bureaucrats from trying to drum up ways to make SDRs “useful,” so that the fund can produce more of them and expand its scope and scale of operations. Never one to let a crisis go to waste, the IMF has used the COVID pandemic to strike gold.

Just how do the SDRs work? They are a basket of five currencies — China’s renminbi, the U.S. dollar, the euro, the yen, and the British pound — that are used as a unit of account by the IMF. In addition, SDRs are interest-bearing assets that can be exchanged for cash, with the IMF facilitating SDR-for-cash swaps among member countries. So, holders of SDRs can potentially transform them into cash if they find partners who are willing to engage in exchange.

The importance of the $650 billion “gift” of free money to the IMF’s member countries that was blessed in Venice is that an entirely new rationale was used to give life to the IMF’s special drawing rights — an asset that has been referred to in the past as a “magnificent failure.”

This isn’t the first time that the IMF has reinvented itself and snatched victory from the jaws of defeat. The IMF, which was born in 1944, was designed to provide short-term assistance on the cheap to countries whose currencies were pegged to the U.S. dollar via the Bretton Woods agreement. When these countries found themselves running short of foreign exchange (i.e., U.S. dollars), they could obtain balance-of-payments assistance from the IMF. This was the IMF’s original, rather narrow, remit.

But, in 1971, when President Richard Nixon closed the gold window, the Bretton Woods exchange-rate system collapsed — and with it, the IMF’s original purpose was swept into the dustbin. Since then, the IMF has used every rationale under the sun to reinvent itself and expand its scope and scale. Unlike old soldiers, the IMF has not faded away. It has grown even larger and even more powerful. In so doing, it has become more political, too.

First, there were the oil crises of the 1970s, which allowed the IMF to rapidly reinvent itself. Those shocks, it was asserted, “required” more IMF lending to facilitate, yes, balance-of-payments adjustments. And more lending there was. In real, inflation-adjusted terms, IMF lending more than doubled from 1970 to 1975, and increased by 58 percent from 1975 to 1982.

With the election of Ronald Reagan in 1980, it appeared as if the IMF’s crisis-driven opportunism would finally be reined in. Yet, with the onset of the Mexican debt crisis, the political elites asserted that more IMF lending was required “to prevent financial contagion, more widespread debt crises, and bank failures.” Surprisingly, President Reagan adopted that very rationale and personally lobbied 400 out of 435 congressmen to obtain approval for a U.S. quota (capital contribution) increase for the IMF. IMF lending ratcheted up again, increasing by a stunning 27 percent in real terms during Reagan’s first four years in office.

And then came the 1990s, a decade of explosive growth for the IMF. The collapse of Communism provided an opportunity that was too good to be true. Currency crises in Mexico, Russia, Turkey, Brazil, Argentina, and Asia added fuel to the fire that allowed the firefighters at the IMF to expand their balance sheet and create even more jobs for the boys. And as they say, the show just goes on and on, with the IMF playing the role of a hydra.

While the IMF’s ability to survive near-death experiences and thrive would not have surprised the British historian C. Northcote Parkinson, author of the 1957 classic Parkinson’s Law, it is quite remarkable in light of the IMF’s actual performance. As Harvard University’s Robert Barro put it, the IMF reminds him of Ray Bradbury’s Fahrenheit 451 “in which the fire department’s mission is to start fires.” Barro’s basis for that conclusion is his own extensive research. His damning evidence finds that

And if that’s not bad enough, countries that participate in IMF programs tend to be recidivists. In short, IMF programs don’t provide cures, they create addicts.

For a clear picture of the extent of this problem, review the chart below. It lists the number of IMF programs that 156 countries have participated in. Haiti leads the pack with 29 programs. Since it joined the IMF in 1953, the country has averaged about 2.3 years between new IMF programs. Argentina is another heavy hitter. It joined the IMF in 1956 and is now hooked on its 22nd IMF program. That’s a new program every 2.9 years on average. More broadly, the list of countries with the ten highest number of loan programs (including ties) consists of 24 countries. These countries account for 36 percent of the total number of IMF loan packages, indicating the troubling pattern of recidivism. 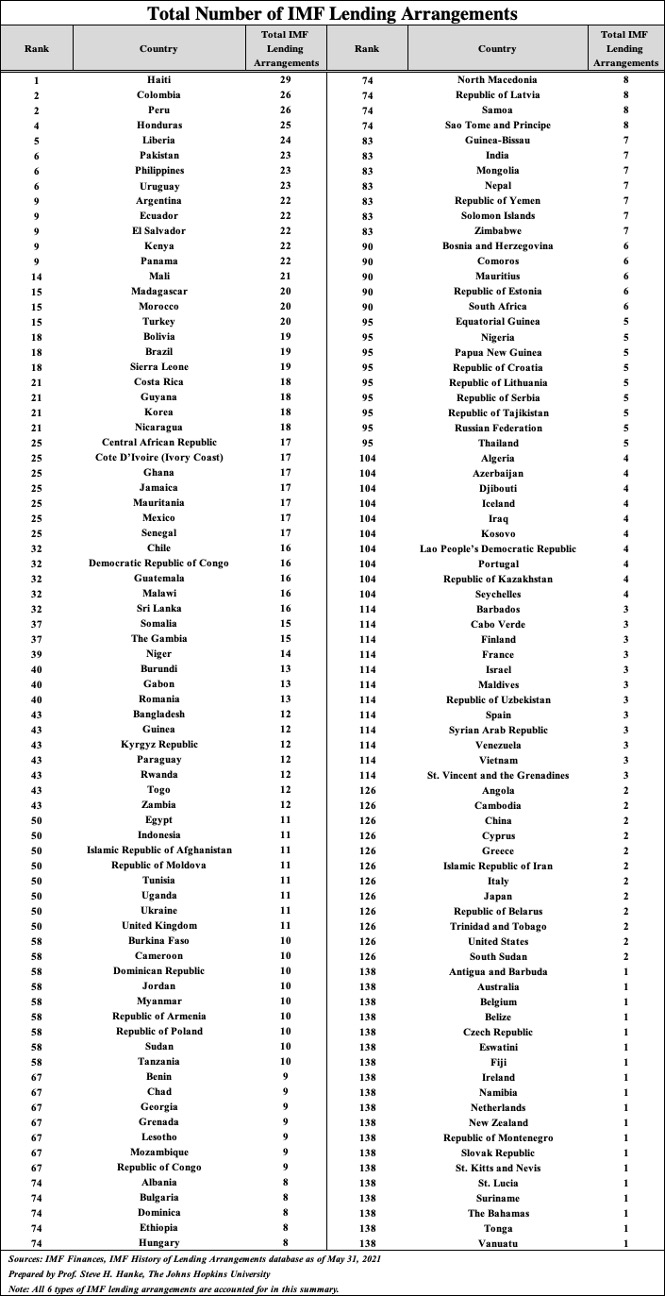 The IMF should have been mothballed and put in a museum long ago. After all, its original function was left in 1971, and its performance in its new endeavors has been less than stellar. But, a museum for the IMF is not in the cards. Even reform is hard to imagine. Indeed, all attempts to reform and downsize the IMF have ended up expanding its scope and scale. Just look at what has been accomplished since 2000, when the blue-ribbon International Financial Advisory Commission — chaired by my good friend, the late Alan Meltzer — recommended that the IMF should be reined in.

About all we can do is realize that the IMF is a political hydra with an agenda to satisfy the bureaucrats it employs and to serve the wishes of the political elites who allow it to grow new heads.

The announcement comes after the media caused a frenzy by falsely claiming agents were hitting the migrants with whips.
Brittany Bernstein

Even after the encampment breaks up, with large numbers of migrants getting into the U.S., the ongoing crisis will continue.
The Editors

Kevin D. Williamson
She fell prey to one of the oldest political tricks in the book.