It’s absurd to pump money into the economy with one hand while draining it with the other.

The Federal Reserve injects $120 billion of Quantitative Easing into the financial markets monthly. At the same time, the Fed is withdrawing even more money from the markets through financial transactions called reverse repurchase agreements (RRPs), because otherwise investors would receive negative interest rates; they would have to pay for someone to take their funds.

The absurdity of the Fed’s pumping money into the economy with one hand, while draining it with the other, recalls boxer Roberto Duran. Like the champion in a rare loss at the end of his career, the U.S. economy can’t take any more debt and is gasping, “No mas, no mas.”

Since the last week of April, the Fed has purchased $311 billion of securities to stimulate the economy, but during this same period, the Fed has absorbed $750 billion from the financial markets, so over $400 billion net was removed from the economy. There is no conceivable economic benefit from these combined actions.

The Fed’s absurdity is compounded because $40 billion of the $120 billion shoveled into the financial markets is for mortgage-backed securities, at a time when residential real-estate prices are at bubble levels. Many Fed officials duck the bubble-valuation issue, claiming that bubbles are recognized only after the fact, but this is false. Bubbles are recognizable when valuation levels are historically unsustainable. Bubbles especially are recognized when valuations are at levels historically corrected only by recession.

That is the current level of U.S. residential real-estate prices.

The chart below compares a ratio of U.S. housing prices, measured by the Case-Shiller index, to per capita disposable income. Only twice before has the ratio been at current levels, the late 1980s and the mid 2000s. Each episode produced real-estate-led recession. 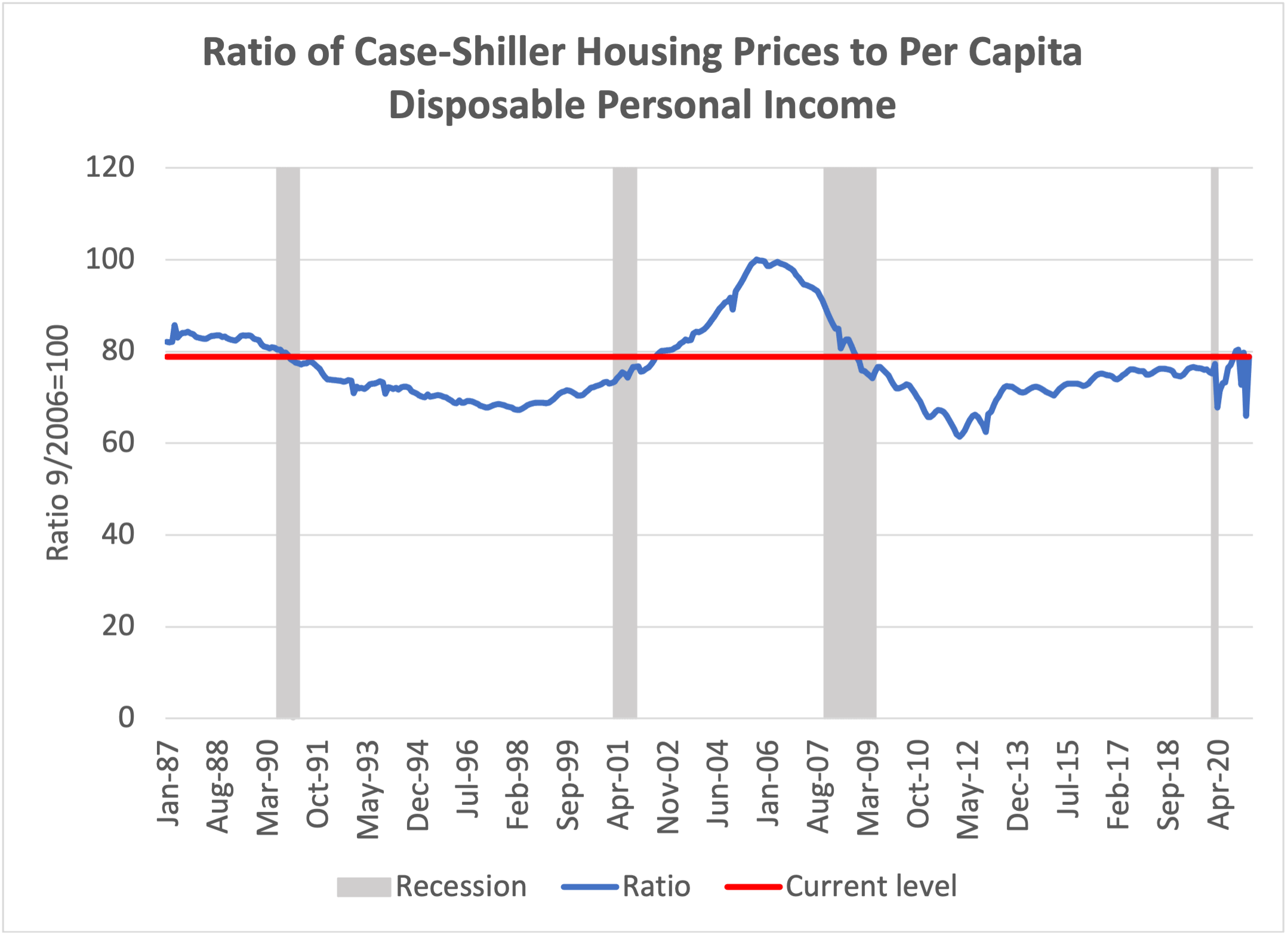 The chart’s other two recessions are the pandemic and the NASDAQ crash of 2001, which is telling for today, because U.S. stocks once again are at unsustainable bubble levels.

Fortunately, residential real estate hasn’t yet hit the peak valuations of the late 1980s or mid 2000s. Ideally, the Fed has time to adopt a policy balancing employment growth and financial stability, but it must cease “thinking” — never mind “thinking about thinking” — and start acting decisively as it did during the pandemic’s onset.

The Fed’s hesitant posture is motivated by reading the wrong lessons from 2013’s “taper tantrum.” On June 19 of that year, then-Fed Chairman Ben Bernanke stated at a press conference that the Fed would moderate its Quantitative Easing asset purchases. The markets then had their “tantrum.” The stock market fell 5 percent in five days while the benchmark Treasury ten-year yield rose from 2.20 to 2.57 percent, a decline in value of 3 percent. Equities then turned around to resume their 19-year bull-market run, but, as shown in the chart below, bonds continued to sell off, with the ten-year Treasury note nearing 3.00 percent in September. 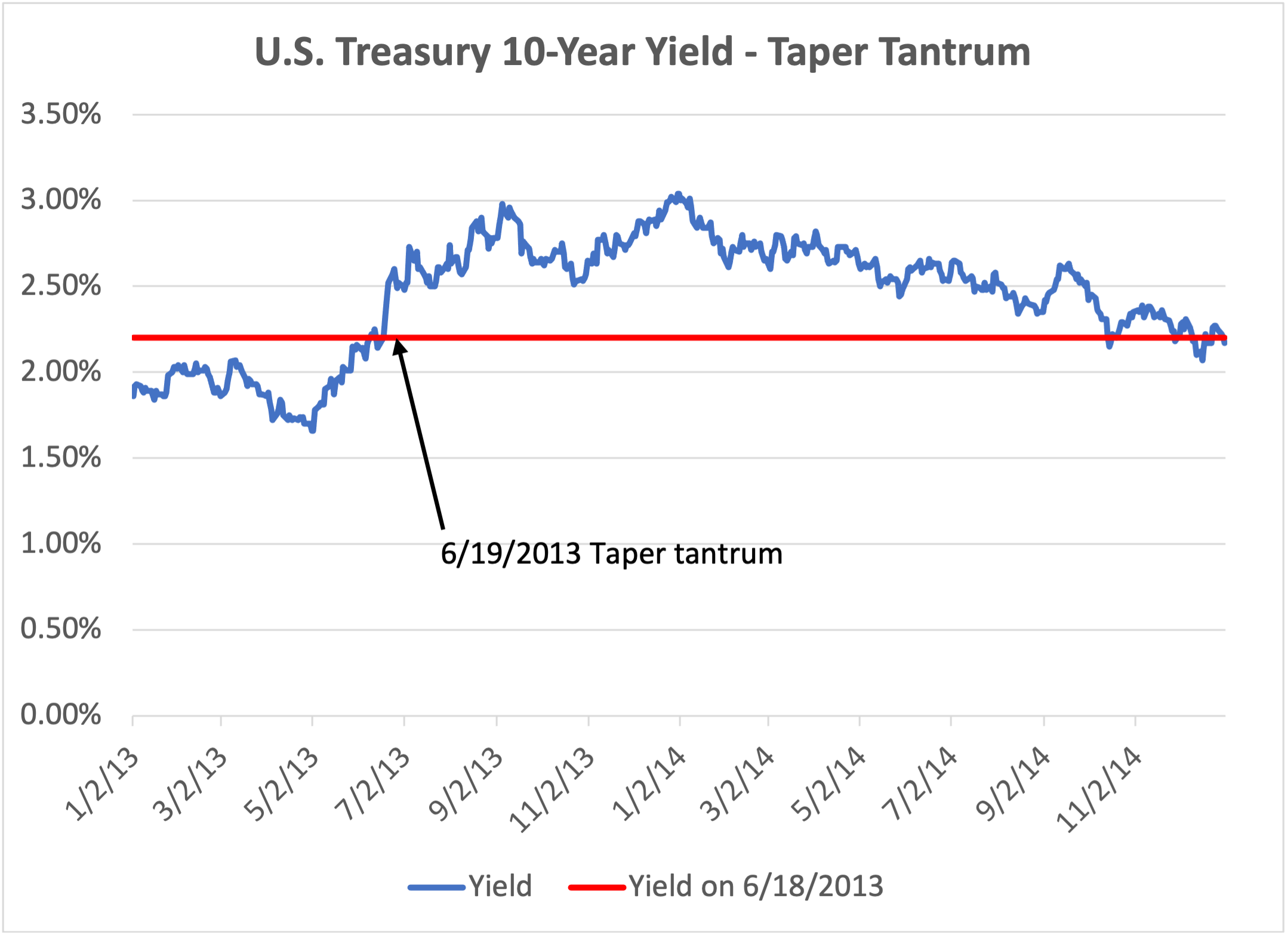 A year later, yields once again were around 2.20 percent. Most important, neither the taper nor the tantrum had an adverse effect on the economy. The two years following Bernanke’s press comments saw the fastest growth of the Obama era. Unemployment declined from 7.5 percent in June 2013 to 5.6 percent by year-end 2014. There were concerns about the taper tantrum’s effect on developing markets, yet, while these markets fell significantly, developing economies received net capital inflows during 2013.

Evidently, the taper tantrum was much ado about not much. Why were the markets so bent out of shape? The chart above shows that yields already were rising before the taper tantrum, probably contributing to markets’ skittishness. Of course, a primary reason for the turmoil was the complete lack of precedent. The markets didn’t know how to assess the taper.

The Fed blames itself for the taper tantrum, reasoning that communication should have been better, which may be true, but the market also was at fault. Hindsight is wonderful of course, but shouldn’t it have been obvious at the time that even tapered QE was still highly stimulative?

What the markets missed in 2013, the Fed is missing now. The Fed is walking as if on eggshells, but the solid foundation in the markets for the next taper already was laid back in 2013, as evidenced by minimal response to the Fed’s “talking about talking” pronouncement. The Fed’s determination to bring down unemployment is laudable, but it clearly isn’t helping to shove funds down the economy’s throat only to have them belched right back, withdrawing nearly half a trillion out of the economy. Avoiding a second dip from a wealth shock is essential. History shows that the bigger the bubble, the bigger the bust.

The bubble question can’t be ducked by justifying valuations based on low interest rates. What happens to valuations when rates normalize, a presumed policy goal? The bubble issue can’t be fobbed off to macro-prudential policy, either. The tight relationship between central-bank balance sheets and risk asset values illustrates that monetary policy is the cause of the bubble, so it must be the solution.

Letting the air safely out of the current bubble will call for unprecedented nimbleness at the Fed, including realigning its balance-sheet and interest-rate policies, but the immediate job is to promptly and systematically wind up QE. The Fed can’t be bound by its past statements on QE. Neither they nor anyone else accurately anticipated the course of recovery from the pandemic and lockdowns, so they must truly depend on the data, and the data say we should stop blowing up the bubble while doing no more than pushing on a string for the economy.

The announcement comes after the media caused a frenzy by falsely claiming agents were hitting the migrants with whips.
Brittany Bernstein

Even after the encampment breaks up, with large numbers of migrants getting into the U.S., the ongoing crisis will continue.
The Editors

Kevin D. Williamson
She fell prey to one of the oldest political tricks in the book.