7.5 million Americans are set to lose expanded federal unemployment benefits on Labor Day, yet progressive policymakers aren’t talking about it. Why?

On Labor Day, an estimated 7.5 million individuals are expected to see their temporary federal unemployment benefits come to an abrupt end. But even though that will mark the largest shutoff of such benefits in American history, two political dynamics have made mention of the approaching benefits cliff all but taboo in progressive policy circles: The cliff was designed by the Democratic authors of the March 2021 American Rescue Plan, and it will disproportionately affect residents of blue states.

The 7.5 million Americans poised to lose benefits in two weeks is a huge figure, exceeding the combined population of the cities in Major League Baseball’s two Central Divisions — Chicago, Milwaukee, Pittsburgh, St. Louis, Cincinnati, Cleveland, Detroit, Minneapolis, and Kansas City. As the chart below shows, the coming benefits cliff is almost six times “steeper” than the next-steepest such cliff in American history: 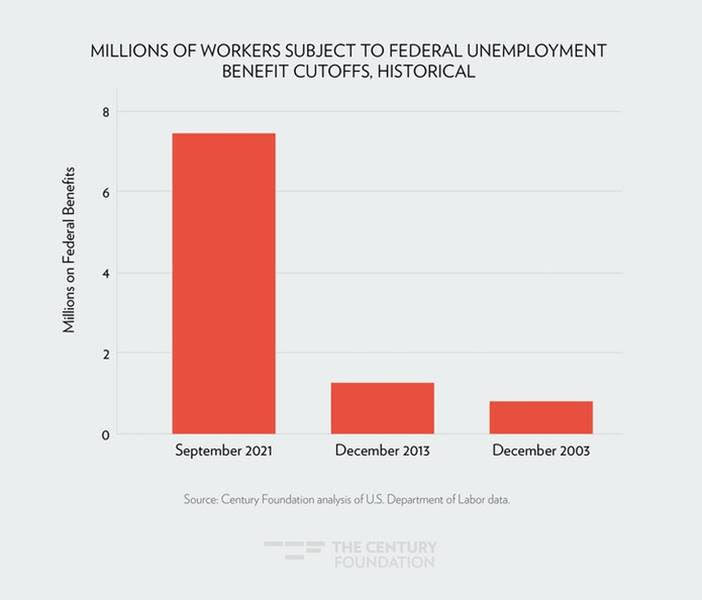 The primary cause of this predicament is that more people have been made eligible for, and continue to collect, the federal benefits in question than ever before. As a result of the pandemic and unprecedented new federal benefit programs, recipients of unemployment checks peaked at almost 33 million in June 2020 — more than two and a half times the prior record. Today, despite 10 million job openings and an unemployment rate that has fallen to 5.4 percent, 12 million Americans remain on benefits — a figure that approaches the pre-pandemic record for recipients, set in January 2010 when unemployment was a far-higher 9.8 percent.

About three-quarters of current recipients collect only federal benefits, and thus stand to lose all unemployment checks when temporary federal programs expire on Labor Day. Others will remain eligible for up to 26 weeks of state unemployment checks, but lose a $300-per-week federal supplement.

One of the ironies of the coming cliff is that it was intentional. The Democratic authors of the March 2021 American Rescue Plan that extended benefits through Labor Day insisted on replacing the “soft phaseouts” created in a bipartisan December 2020 law, which would have allowed current recipients to continue collecting benefits for some time after the program closed to new applicants, with a “hard cutoff” that took away all recipients’ benefits at the same time. Why? Because in the bizarre logic of some liberal policymakers, hard cutoffs improve the odds that Congress will approve another extension. The more acute and widespread the pain of a program’s expiration, the malign thinking goes, the greater the political pressure to extend it.

That logic has been undercut by many states’ decision to simply opt out of paying federal benefits in recent weeks. The opt-outs include most red states, whose leaders argue that expanded federal unemployment benefits have kept people from returning to work. And as a result, they have reduced many red-state representatives’ incentive to support another extension of benefits, since the checks wouldn’t be going to their constituents regardless.

That contributes to the second irony behind the coming benefits cliff: The vast majority of those about to lose benefits as a result of the Democrat-designed law are residents of blue states, including populous California, New York, Pennsylvania, Illinois, Michigan, and New Jersey. In the week ending July 24, over 80 percent of those receiving major federal benefits were in states led by a Democratic governor.

With vaccines widely available and record job openings, it is well past time for these extraordinary benefits to end. President Biden dismissed the possibility of another extension in May. Senator Joe Manchin (D., W.Va.) recently seconded that, when he suggested “I’m done with extensions.” Just last week, the Biden administration formally pulled the plug on further federal funding, stating in a letter to Congress that the $300 bonuses “will expire” as scheduled. The fact that it is Democrats who are nixing any chance of another extension has undoubtedly contributed to what some call the “current silence of federal policymakers” about the upcoming benefits cliff. But two lesser-known truths — that the cliff was designed by Democrats, and that it will disproportionately affect the residents of blue states — also explain why Washington lawmakers who usually cheer on more benefits have been notably silent about the “hard cutoff” to come.

The Editors
It won’t deflect the public’s attention from the administration’s abysmal record.
View More
Loading...