On Mozart, pandemic protocol, a Holocaust survivor, patrons of the arts, and more

‘Say hello to music for me!” That’s what Bill Buckley once said to me, when I was heading to the Salzburg Festival. I think of it every time I head back. WFB loved music supremely. You could hear it in his prose, and in his speech.

• As the plane lifts off from JFK, a flight attendant — a young German woman — peeks out the window. “I want to see the Statue of Liberty,” she says. “It’s my favorite part of the trip.”

I’m glad there’s life in the old gal yet. (I’m talking about the Statue of Liberty, not the flight attendant, who is no older than 25.)

• On the flight to Munich, there’s a shocking instance of air rage — shocking to me, at least. I am at a loss to explain. I will simply relate some facts.

I heard a woman cry out. “You hurt me.” And she was whimpering. Then she began banging on a lavatory door, maniacally. (She was banging on it from the outside, not the inside.) The sound was like thunderbolts. Another woman opened the door. The first woman said, “I just want you to know you really hurt me.” Then she burst into tears and ran off.

I believe she was a flight attendant. I don’t know. It was sort of a shocking 35 seconds or so.

I went to seek out the woman who had been hurt. But could not find her. The flight continued in peaceful fashion with this mystery in the air — or at least on my mind.

• In the Munich train station, early in the morning, there’s the smell of bread — fresh bread, coming from a variety of bakeries and other eateries. There’s nothing like it, that smell — heavenly.

• I see a notice for a train to Dachau. Such a notice has to be perfectly normal, if you live here. Unremarkable. Well, I don’t live here.

• On the platform in Salzburg, passengers from Germany are greeted by soldiers. They are asking for a vaccination card — either that or proof of a recent test.

• In most of the restaurants here, you have to show a card — vax or test. It seems rather normal and unremarkable. There is no grumbling. People just do it, matter-of-factly.

• You have to do it to get into a concert hall, too — I mean, show a vax or test card. Also, you have to wear a mask — and not just any mask, but an FFP2 mask. I have arrived in town with blue surgical masks — you know the type — and N95s. But FFP2s are what’s required.

• My balcony looks into Mozart’s yard, a couple of houses away. And across the street from Mozart’s house, this guy was born, about 50 years after Mozart was. Does the second guy have any effect on you? 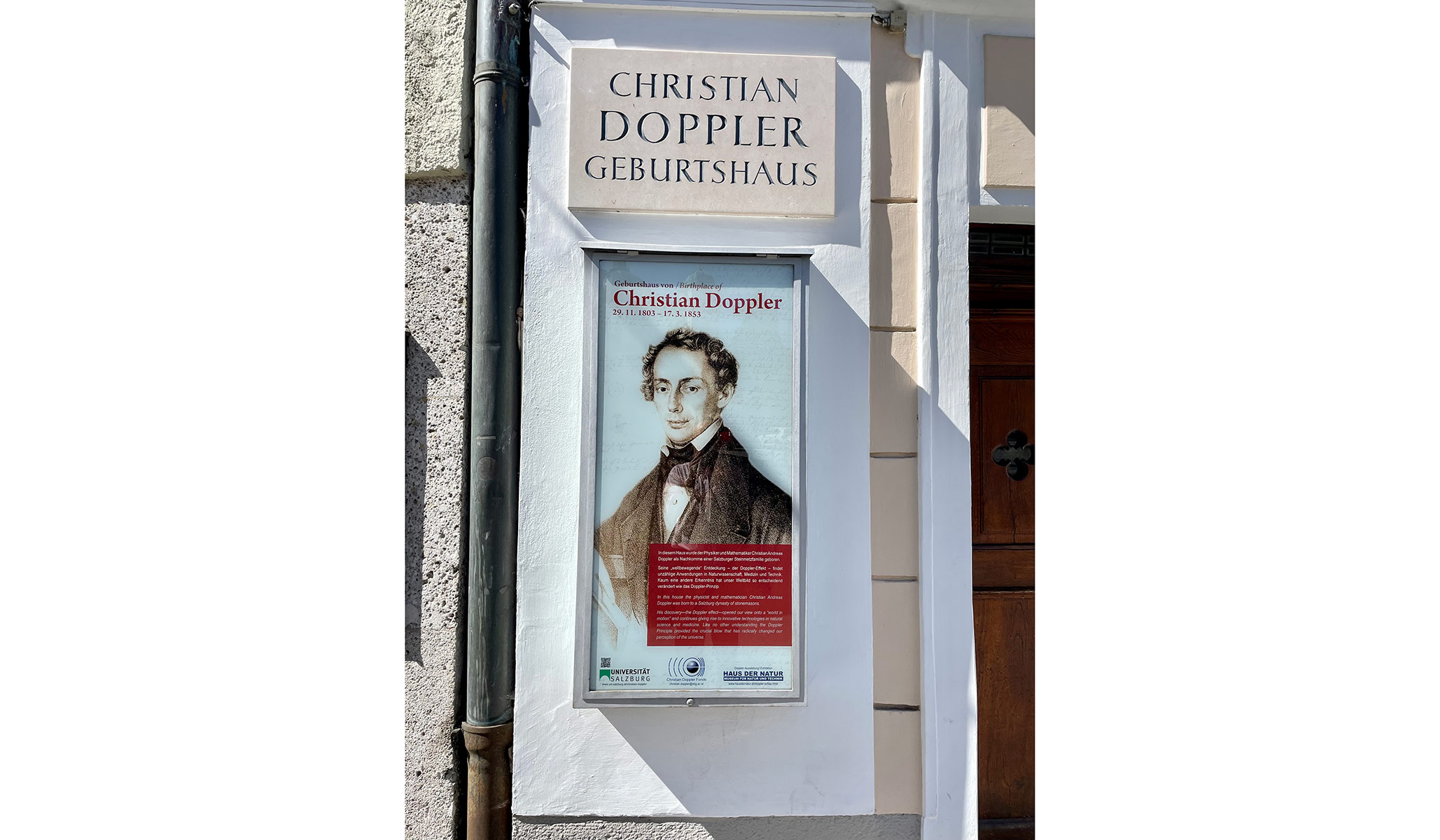 • I have been coming here since 2002, I think. Next to me, two young women are having a conversation in a language I don’t understand. A Central Asian one, perhaps? But I hear the word “Instagram” — and think, “Well, that’s one word that didn’t exist, back in 2002.”

Weird thought to have, maybe, but there you go.

• The smell of cigarettes seems odd to me — odd, old, and familiar. I don’t smell cigarettes back home. Obnoxious weed — pot — yes. “Skunk weed,” I think they call it. But I don’t encounter cigarette smoking much — not on American soil.

• Gosh, these pedestrians, they wait for the light to change, even if there’s no car within miles! My American feet itch and itch . . . 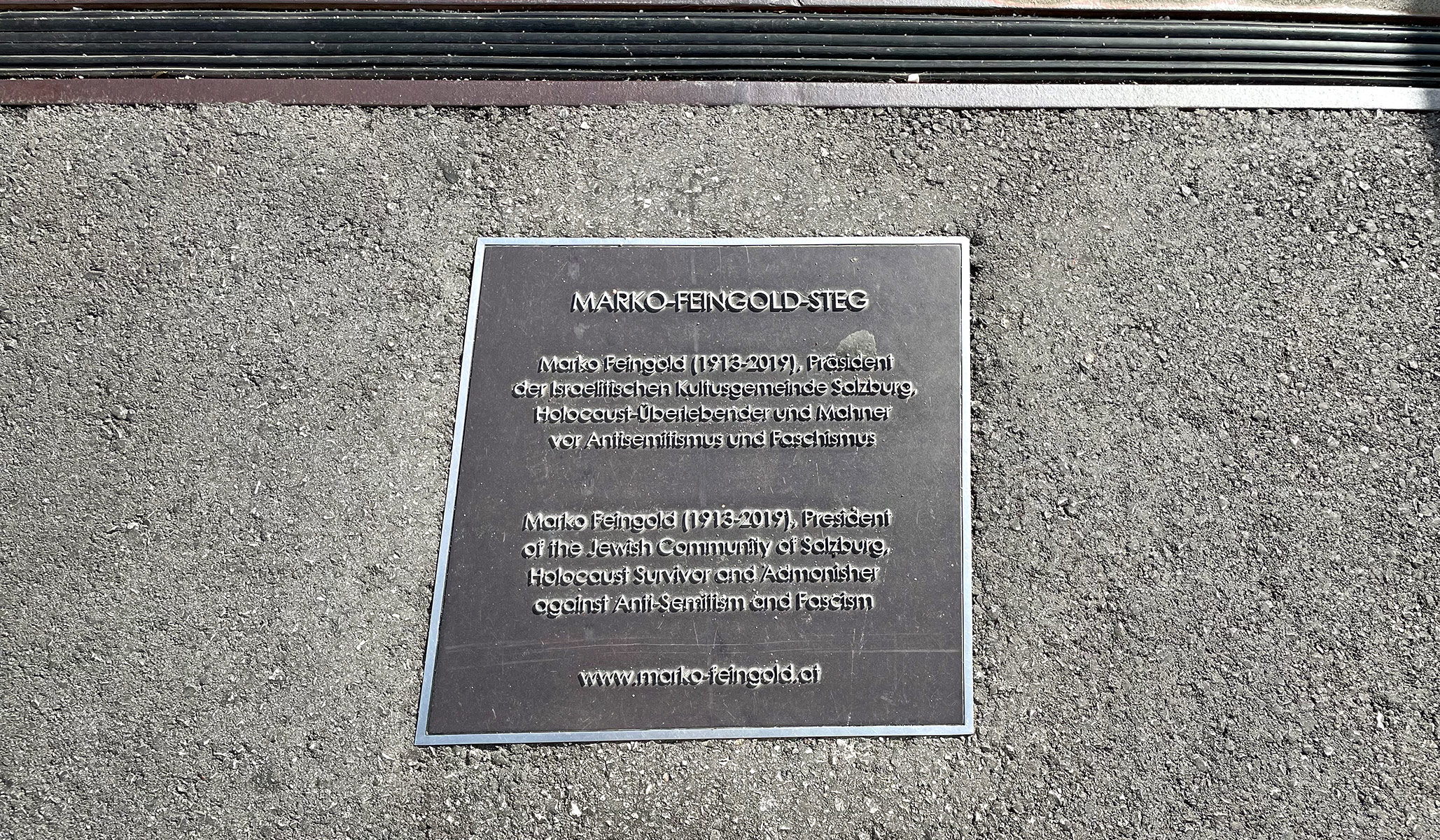 I met Marko Feingold in 2013, when he was 100. He was the leader of the Salzburg Jewish community (small). And one of the leading Holocaust educators in Austria. “I could write a Michelin guide to the camps,” he would quip. He had survived four of them: Auschwitz, Neuengamme, Dachau, and Buchenwald.

For my piece on him, go here. One of the more memorable people I have ever come across. Astounding, actually.

• There are fewer people at the Salzburg Festival this year — fewer than normal. Although more than last year, 2020, the pandemic year. (Heavy-pandemic year, I should say. This year is a lighter pandemic year.) I’m told that there are very few Chinese and Japanese — and very few Americans. “Yours is the first American voice I’ve heard in this town in two years,” says a French colleague of mine.

• Vienna has the big Sacher Hotel — but there’s a Sacher here in little Salzburg, too. Damn expensive. Business has been way down, of course — in both cities. I’m told something charming: Earlier in the pandemic, the Sacher — both of them — offered steep discounts, for locals. One could spend the night at the Sacher and have dinner too — for cheap, relatively.

A chance to stay and dine at the Sacher Hotel, for people who have passed it all their lives. Interesting to think about, and nice, I think.


• Every sight in this town has a memory for me — every place, every step. Ah, we ate there and she said this. Or, That’s where I learned [whatever]. Or, They tried to clean the ink stain off my jacket.

At home, I never have these memories. Never. I walk through town every day, and, if I think at all, I think: What am I going to have to eat tonight? Or, When am I going to learn to hinge properly in my golf swing? Or, Do I have two deadlines tomorrow or just one?

You know what I mean, I bet.

• I walk for a bit along the Wilhelm Backhaus Path. Frankly, it’s amazing to be in a town that honors pianists — or cultural figures at all — in this way.

• Check out this high school (and you may be able to see some mountains, reflected in the window): 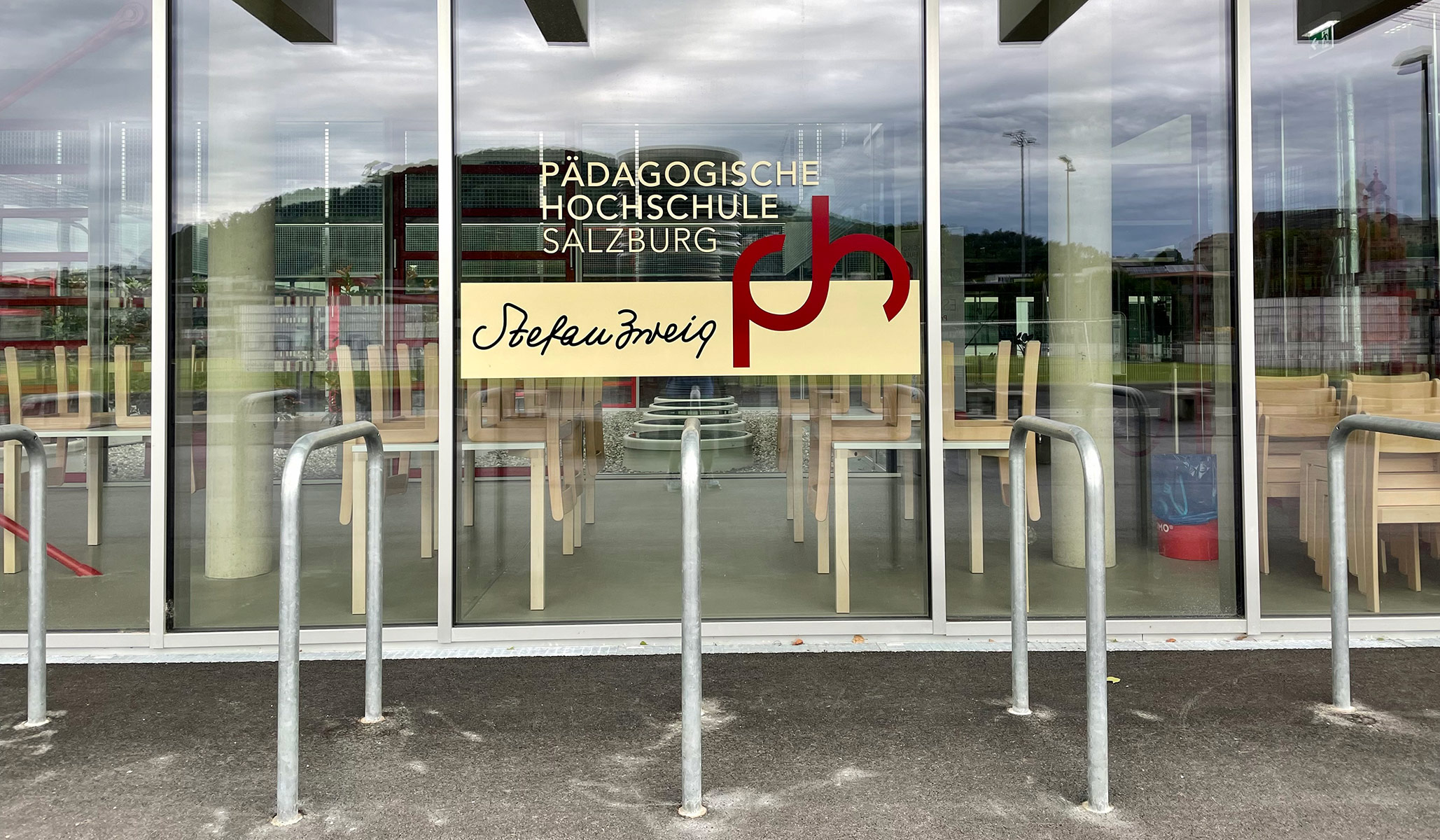 Zweig, you remember, was a novelist and all-purpose writer. He was one of the librettists of Richard Strauss.

• Back to schools. When I lived in Washington, D.C. — years ago — I lived very near the Edmund Burke School, which I thought was pretty neat. 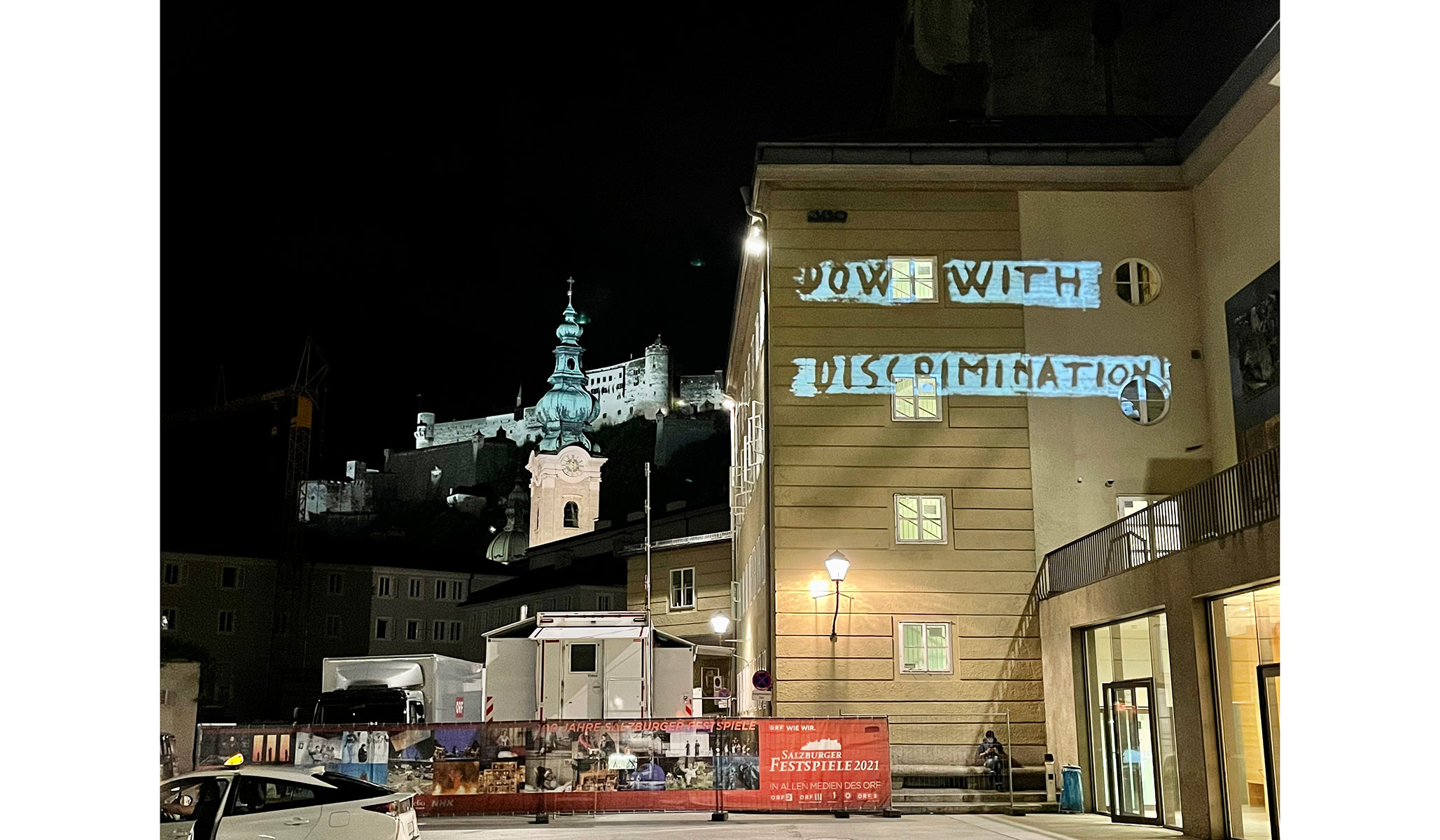 • Early one morning, I walk out of the house and think, “Their streets are cleaned” (perfectly). (You could practically eat off the suckers.) “Why can’t ours be cleaned? Or at least non-filthy?”

• At intermission in the Grosser Saal of the Mozarteum, my eyes fall on a particular seat — the last seat on the left end of the first row. “The Fred Koch seat,” I think. That’s where Fred always sat. Not an especially good seat. But I believe he could make a quick getaway, without having to talk with anybody, or otherwise deal with anybody. (I understand, totally.)

• Speaking of philanthropists — here’s my late friend Donald Kahn. Well, a bust of him, anyway (in the Haus für Mozart, which he funded). 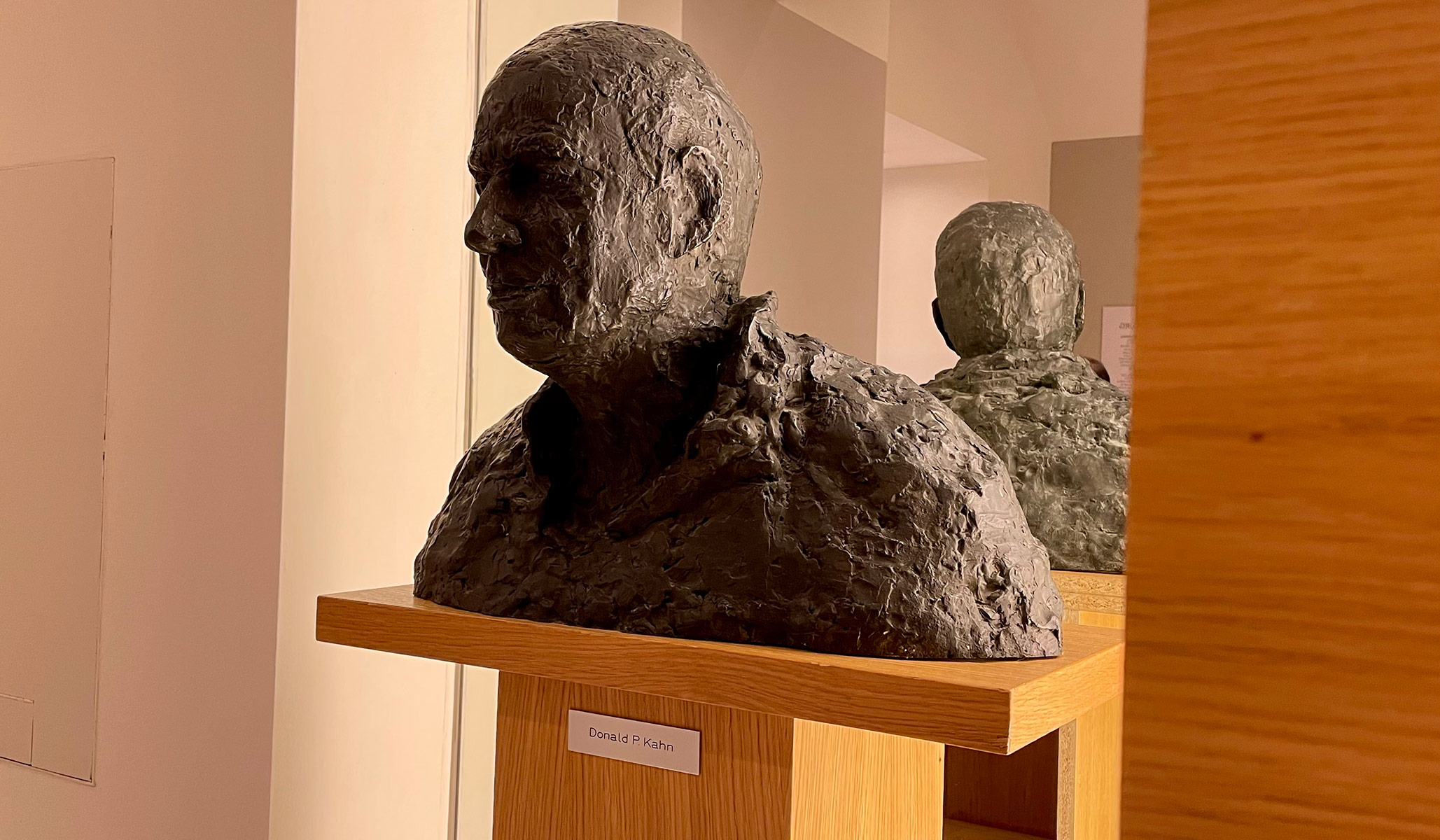 Donald was one of the most distinctive friends I ever had. A pleasure to talk to, about politics, music (classical and Broadway), women, social relations . . . Holy moly, was he fun. He is part of my flood of memories this week. Donald was a nephew of Walter Annenberg, who dated Ethel Merman. (I mean, Annenberg did, not Donald.) Donald came on a National Review cruise once. I could go on . . .

• On Saturday, there are often weddings at the Schloss Mirabell, spilling out into the Mirabell Gardens. Here’s a scene — with a natty tyke walking ’round a fountain: 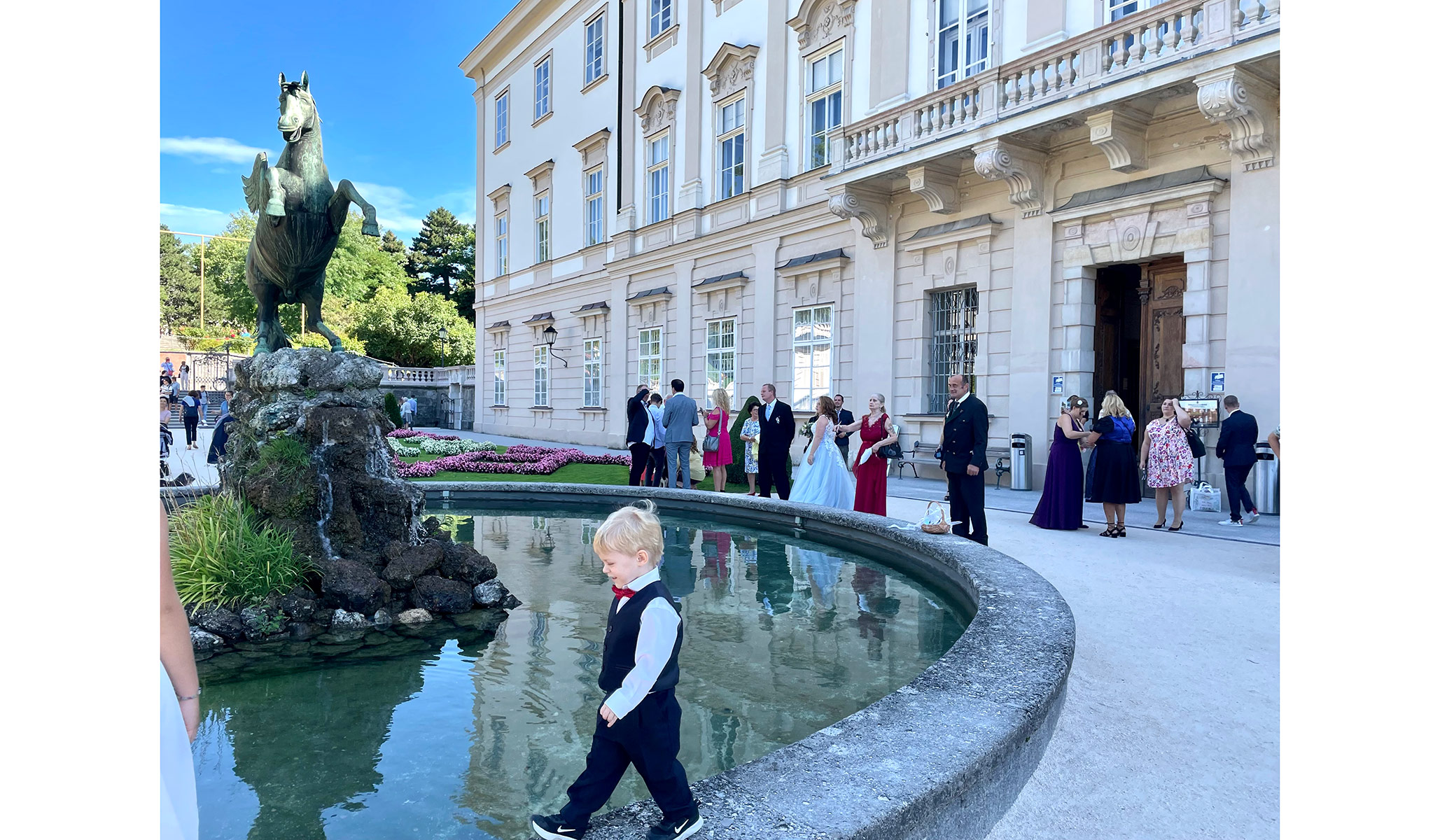 • This is kind of neat, right? 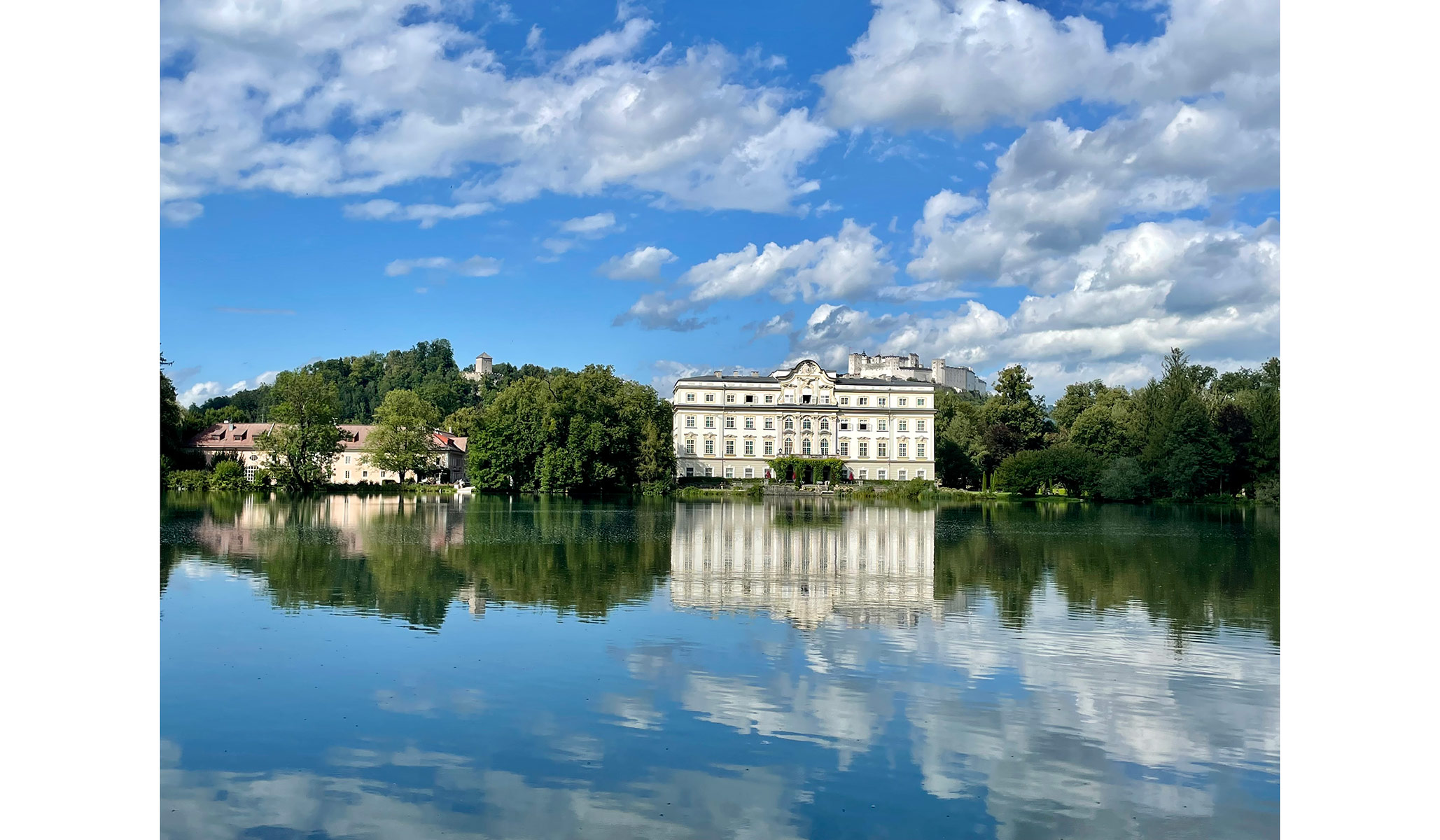 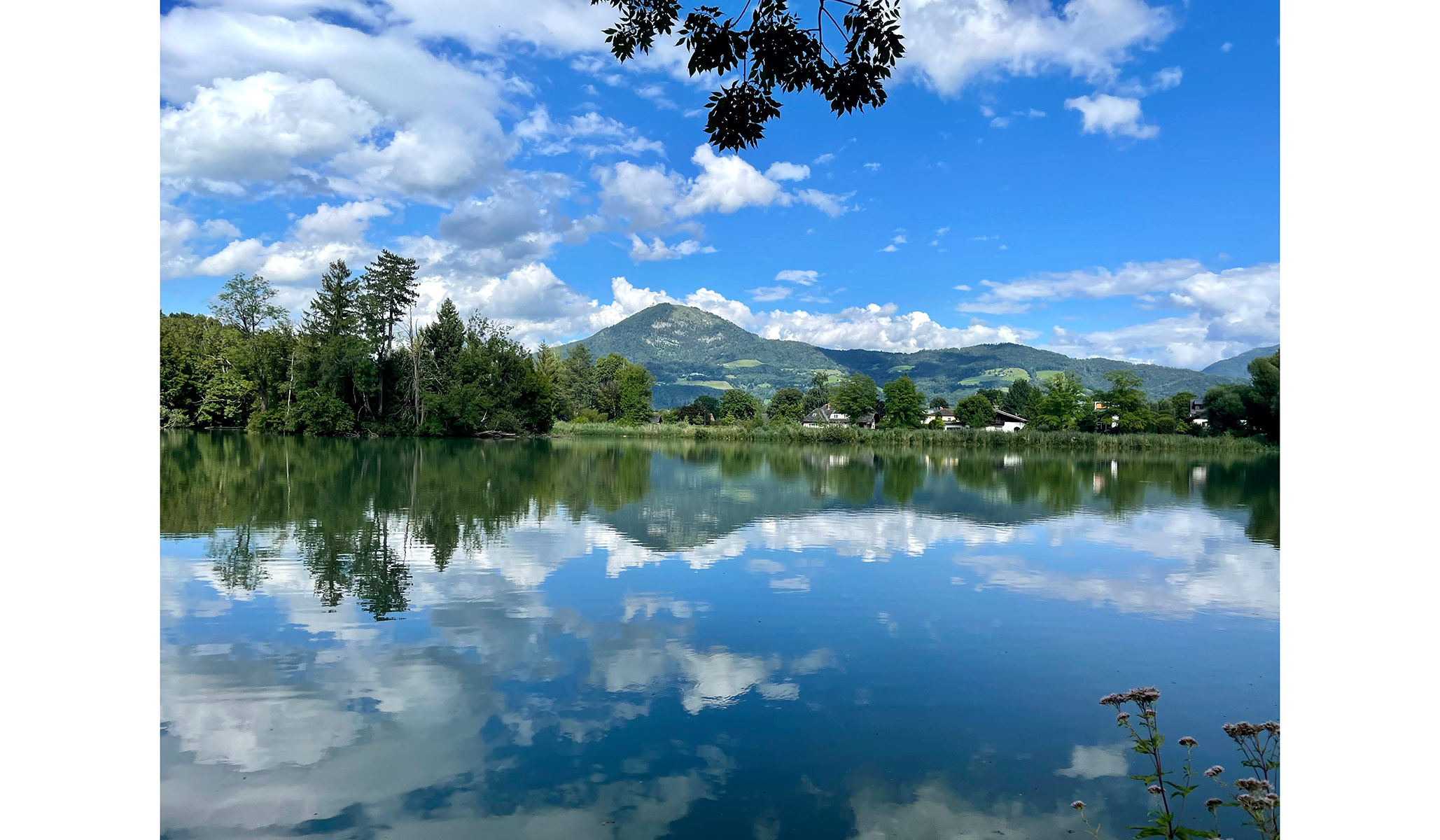 • And this is kind of the show-stopper: 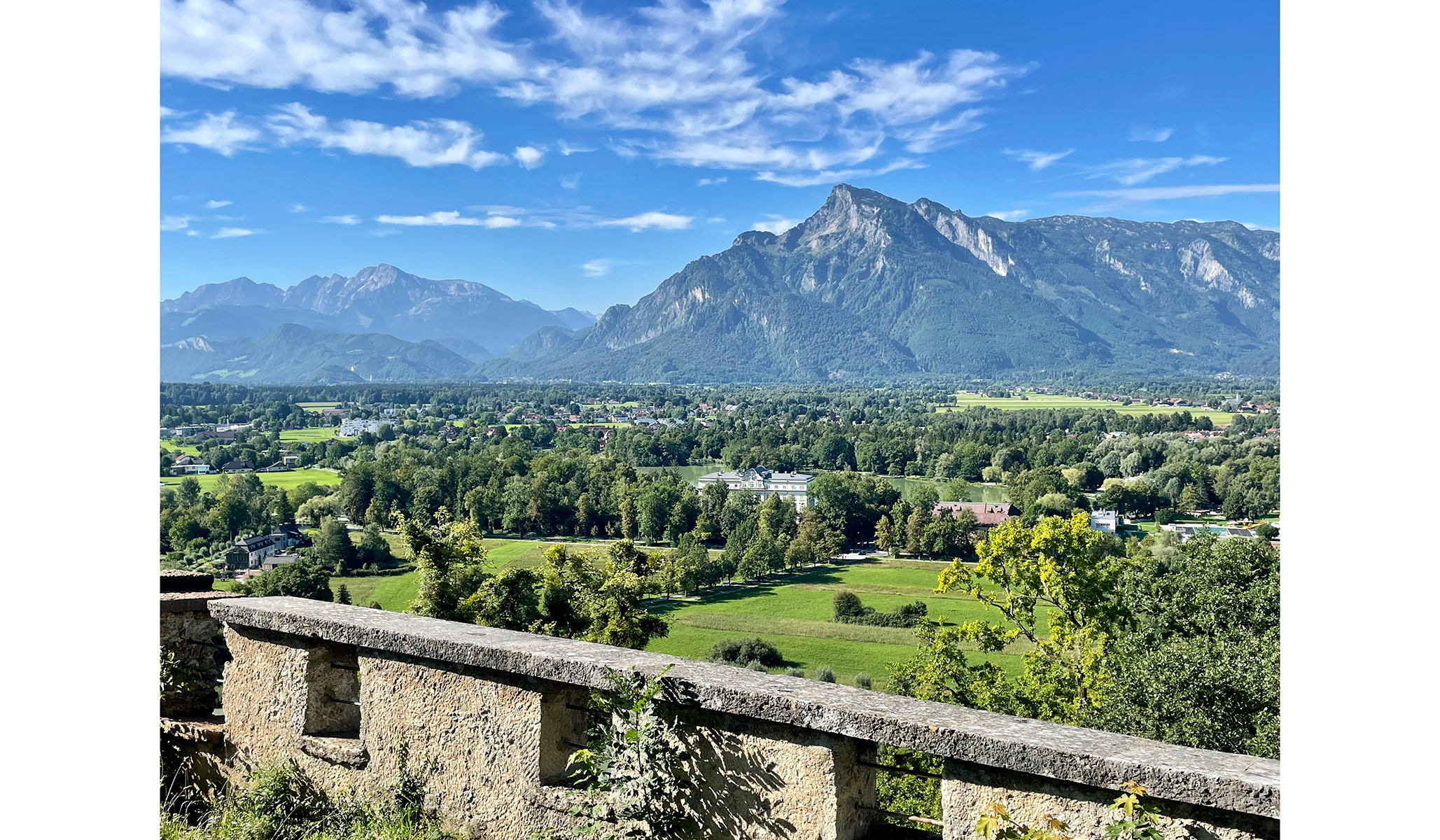 Yup, the hills are alive (though there are no Americans here to take the Sound of Music tour).

Thanks for joining me today, guys. I know these journals aren’t for everyone. They let me know, in no uncertain terms (pretty nasty ones). But these journals are for some of us — and no one has to read anything, right? There are many fish in the sea. And we can cast our lines where we like.

When Part II will come, I’m not sure. But I’ll see you later, and wish you a wonderful week.