Inflation Is Here: What’s Next?

It’s Time to Transform the WTO

If the past five decades are any guide, the Senate infrastructure bill is unlikely to stimulate economic growth.

In 1998, the average senator in today’s Congress was 32 years old — a prime car-buying age and a likely target demographic for General Motors’ Oldsmobile division — which attempted to appeal to younger car buyers with the advertising line that its models were “Not your father’s Oldsmobile.” Oldsmobile sales had peaked in 1984, and the new slogan didn’t reverse their trajectory. GM dissolved the Oldsmobile division in 2004.

Those senators have harkened back to their youthful years in passing the recent infrastructure bill. Infrastructure is politically popular and considered by many a tool to boost the economy, but the recent $1 trillion infrastructure bill passed in the Senate is probably no more likely to help the economy than Oldsmobile’s ad slogan helped the doomed division. A new body of economic research recently highlighted in a Wall Street Journal report suggests that new highway spending (which accounts for about 20 percent of the spending proposed in the bill) would have very limited effectiveness as a means of stimulating the economy.

In the report, University of Pennsylvania economist Gilles Duranton is quoted as saying that the prospect for a long-term economic boost from highway spending “seems to be dubious.” Duranton and his two co-authors find that infrastructure investments “lead to a displacement of economic activity while net growth effects are limited.”

The chart below compares U.S. non-military government investment to the investment share of the private sector. To highlight long-term effects, the previous five years of public-sector infrastructure investment are compared with the subsequent five years of private investment. First the Oldsmobile era through 1971 is examined. 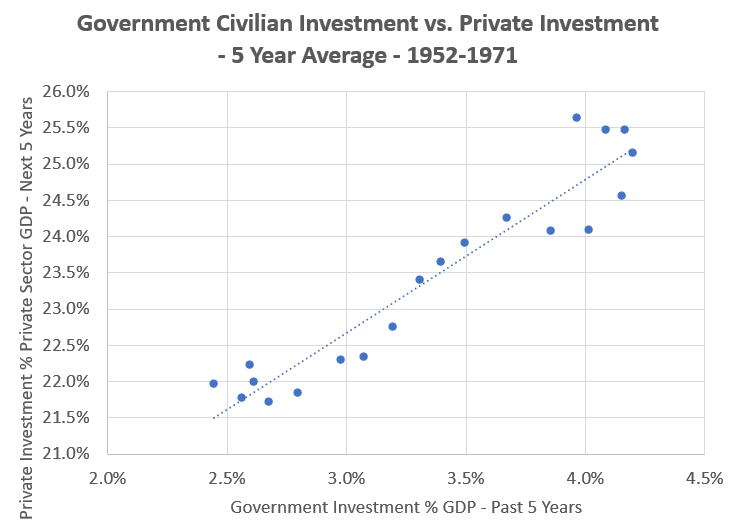 What about the later Oldsmobile era (and thereafter)? 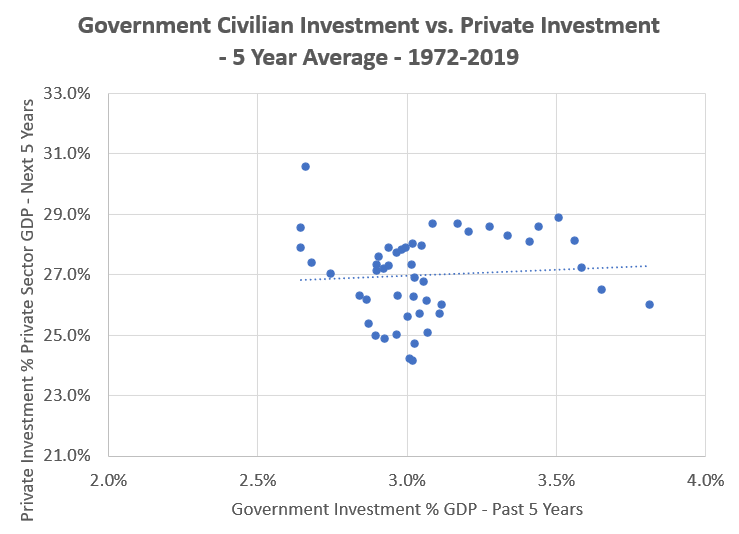 Just as infrastructure investment has grown less effective, it’s also grown more costly. Congress’s funhouse-mirror accounting shows an increase of “only” $256 billion in the federal deficit, but much of the “source” of funds for the infrastructure package comes from “repurposed” pandemic spending. In other words, this money, which was budgeted but never spent, still must be financed with deficit borrowing.

Government deficits depress private investment, as shown in the chart below. 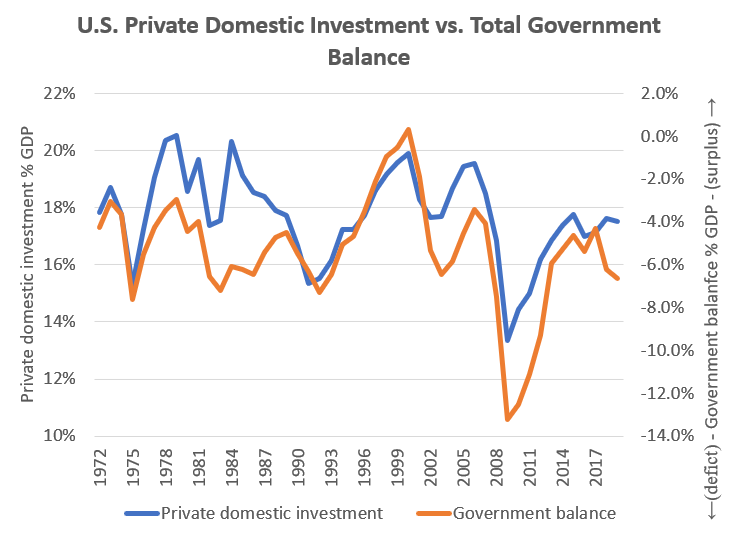 The Congressional Budget Office has found that private investment is reduced by about a third of federal borrowing, which is reflected in the chart.

The failure of infrastructure investment to stimulate growth, and the adverse effect of deficit financing on private investment, render the Senate’s $1 trillion infrastructure package a net loser for the economy.

While the infrastructure package may be an economic loser, it could be a political winner at least for some Republicans. Infrastructure remains politically popular. Even if it doesn’t contribute to productivity, it can contribute to higher quality of life. Many have experienced the satisfaction of cruising down a smooth new highway. While not being more productive in doing so, it can be more enjoyable, enough to put in the rear-view mirror construction delays and rutted roads. Seventy percent of voters surveyed supported the infrastructure package.

Republicans needing moderate support may benefit from their association with the measure. The key will be the turn against the Democrats’ $3.5 trillion budget-busting spending splurge. Republicans uniformly oppose the measure and must effectively resist it to reestablish their spending bona fides with voters.

However politically advantageous infrastructure may be for some, it has little prospect of boosting economic productivity, and, to maintain any standing with their voters, Republicans must use their power in a narrowly divided Congress to stifle the next $3.5 trillion of spending.

Nine Republicans voted in favor of the measure.
Zachary Evans

The letter prompted a memo from AG Garland directing the FBI to investigate alleged threats against school-board members.
Caroline Downey