Is It ‘Emotional Abuse’ for Parents to Deny a Child’s ‘Transgender’ Claims?

In an August address to the nation on Afghanistan, President Biden attempted to justify America’s surrender and withdrawal by asserting that, among other things, “our mission in Afghanistan was never supposed to have been nation-building.” President Biden then went on to say that our mission “was never supposed to be creating a unified, centralized democracy.” These assertions are jaw-dropping — literally fantastical. Haven’t the President and his advisers read the Bonn Agreement that was signed in December 2001 after the ouster of the Taliban, or observed anything that has followed? Even though it all might have been a fantasy, no one with any knowledge or experience in the post–Bonn Agreement era would deny that the United States and its allies were engaged in a nation-building exercise, one that was focused on constructing a centralized government.

Despite our dismal record at nation-building, we marched forward in Afghanistan, repeatedly reaching for the foreign-aid checkbook. What makes this so shocking is that professionals of all stripes know that government-to-government foreign-aid schemes typically fail and are often little more than poster children for waste, fraud, and abuse. As a House Foreign Affairs Committee put it back in 1989, U.S. foreign-aid programs “no longer either advance U.S. interests abroad or promote economic development.” A Clinton administration task force rendered a similar conclusion on the efficacy of foreign aid: “Despite decades of foreign assistance, most of Africa, and parts of Latin America, Asia, and the Middle East are economically worse off today than they were 20 years ago.”

In Afghanistan, none of the mountains of evidence pointing to the failures of foreign aid and nation-building were ever allowed to see the light of day. As it turns out, the professional elites who live off the “delivery” of foreign aid are a tightly knit epistemic community that promotes and runs the foreign-aid show. For them, the show must go on. In Afghanistan, it did, and what an extravaganza it was.

To get a handle on the magnitude of waste, fraud, and abuse in Afghanistan, I use the figures reported for Official Development Assistance (ODA). ODA includes both humanitarian and reconstruction aid, mostly in the form of grants and other assistance on concessional terms. ODA excludes military, counter-narcotics, and a plethora of other transfers.

The table below shows the total yearly amounts of ODA that flowed into Afghanistan in the 2002–19 period. The total was $76.6 billion. This total is second only to the $79.4 billion received by Iraq during the same period. For Afghanistan, the ODA provided a very significant chunk of the country’s GDP, amounting to 22.2 percent in 2019. The comparable figure for Iraq was only 1.0 percent. The relatively large portion of Afghanistan’s GDP provided by ODA and the fact that it has remained “large” for the better part of 20 years simply means that the formal economy of Afghanistan is aid-dependent. The training wheels have never been taken off.

Another feature of the ODA data worth mentioning is that it surged when Barack Obama became president in 2009. Recall that it was Commander-in-Chief Obama who ramped up operations in Afghanistan. On his watch, not only did aid surge, but so did the level of U.S. troops, reaching its maximum of 110,000 in 2011. Interestingly, during the U.S. surrender and pull-out phase in Afghanistan, Obama has disappeared like a ghost. Even though he has attempted to leave not so much as a fingerprint, the ODA data reveals some of Obama’s handiwork. 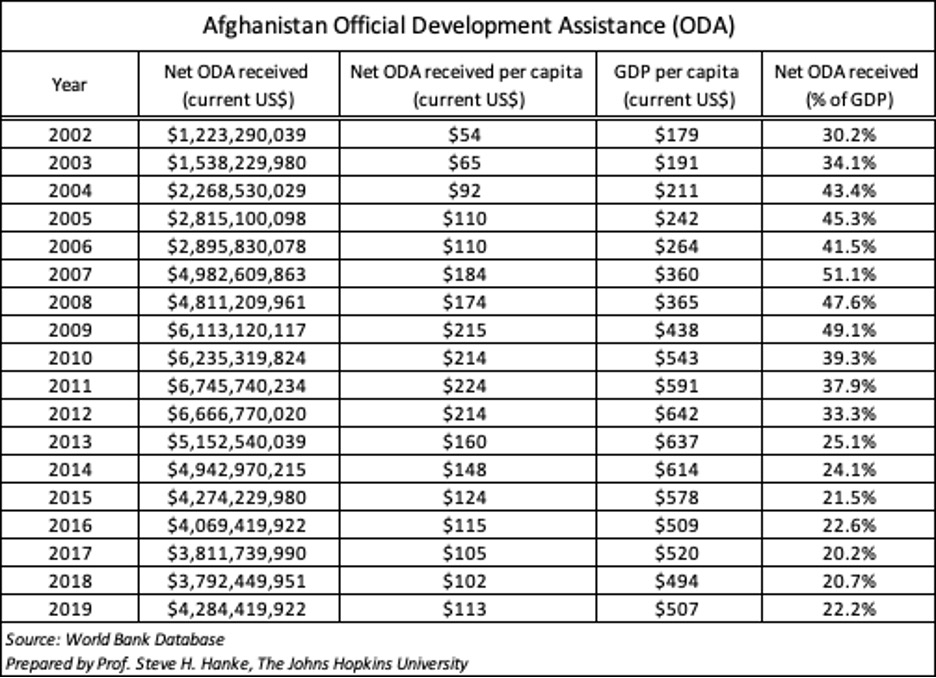 The Afghan economy was controlled by what was, in essence, an organized-crime syndicate: the Afghan elite who were connected at the hip with the foreign-aid donors. The bribes that flowed up the hierarchy formed the tribute, the protection money, or the informal taxes that were a necessary part of obtaining employment and conducting business in Afghanistan. While the corruption cornucopia made the Afghan elite rich, it also sowed resentment against them. It was not a model designed to win friends and influence people.

The other cornucopia that crackpot foreign-aid plans opened up was the production of opium. Instead of fostering traditional agriculture and markets in the rural areas where most Afghans live, misguided plans gave rise to a massive opium industry. Today, over 40 percent of Afghanistan’s agricultural land is dedicated to the production of opium poppies. As a result, Afghanistan produces a staggering 85 percent of the world’s opium.

One thing that ODA money never delivered was what the United Nations terms “human development.” Since 1990, the U.N. has been measuring a Human Development Index. It measures, with a variety of metrics, along three broad dimensions: a long and healthy life, attainment of knowledge, and standard of living. Today, after 20 years of aid programs, Afghanistan ranks a miserable 169 out of the 189 countries covered in the U.N.’s 2020 Human Development Report. That is only one notch above Haiti, another failed state that has been lavished with foreign aid.

If Afghanistan’s current ranking isn’t bad enough, it’s worth noting that in the past five years, it’s been sinking. And its current rank of 169 is almost exactly where it was in 1993 (171), the first full year after the communist government in Afghanistan departed.

It’s clear that our leaders in the foreign-aid community suffer from a pathology that Moisés Naim has identified as “ideological necrophilia.” They are afflicted with a love for ideas that have repeatedly produced inconvertible failure and should be dead. Indeed, just look at how the Biden administration proposes to stop the flow of immigrants coming from Central America. You guessed it. Our ideological-necrophiliac president has opened the U.S. taxpayers’ checkbook and has fancifully promised that aid will do for Central America what it was promised to do for Afghanistan.

The Week The Week

The week of October 11: a grim cocktail (an energy crunch, inflation, and a supply-chain mess) and much, much more.
Andrew Stuttaford

Many have criticized the Transportation secretary’s decision to step away from his role for two months while the U.S. has struggled with supply-chain issues.
Brittany Bernstein

Fourteen adults and three minors were reportedly abducted by 400 Mawozo, a gang that is well-known for targeting religious groups.
Brittany Bernstein

More than any other author, the poet of Stratford informed the writing of the towering British statesman, political leader, and Nobel laureate.
Tod Worner

If these are the best of times, why do they hurt so much?
Kevin D. Williamson

Charles Hilu
Bright Sheng has been punished for making his students feel uncomfortable and ‘unsafe.’

The Editors
By standing up to the woke mob, Netflix is providing a model for how corporations should respond to demands that they enforce leftist speech codes.
View More
Loading...