A General Who Failed in War Assesses Risk

As a percentage of GDP, the arms left in Afghanistan represent the largest international weapons transfer in decades.

Economic statistics rarely deepen the sense of drama behind headlines. The Taliban’s new cache of American arms may be an exception. Each of the Taliban’s new American-made M4 assault rifles costs more than a year of per capita output in Afghanistan. The Taliban now cruise in some of the 4,700 Humvees transferred by the U.S. to Afghanistan between 2017 and 2019. Twenty thousand Humvees would cost the whole country’s annual GDP. The arms transfer that occurred as the U.S. withdrew and American-aligned Afghan forces surrendered in a haste really is as enormous as it seems. Relative to the size of the local economy, as the chart below shows, it’s the largest transfer of weapons the world has witnessed in decades. 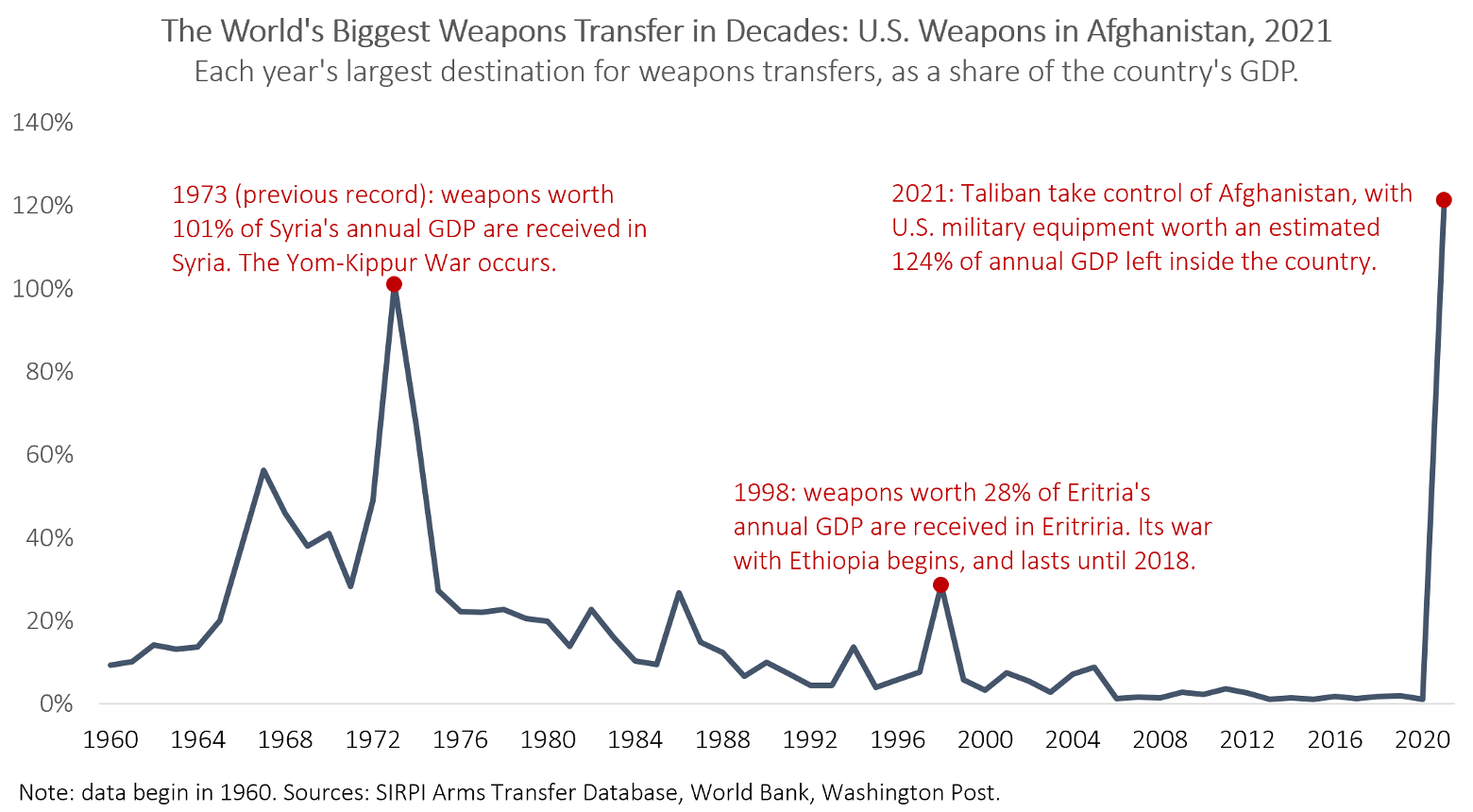 The chart shows the world’s largest annual weapons transfers as a share of the receiving country’s GDP since 1960. The underlying data on weapons transfers come from the Stockholm International Peace Research Institute. Their data document weapons transfers to governments as well as other armed groups. In the 1980s, for instance, the data for Afghanistan document weapons transfers to the Mujahadeen, the Taliban’s predecessor, as well as to the Northern Alliance (the anti-Taliban opposition the U.S. aligned with in 2001) along with the central Afghan government. For each country in a given year, the value all arms transferred to any group operating within its borders is added up, creating a single value for arms transferred to armed groups in that country. This value of all weapons received in a given year is then divided by the annual GDP of that country, available from the World Bank. For this metric of weapons received as a share of GDP, the chart displays the largest value registered by any one country for every year since 1960, the first year for which these data are available. World War II and its aftermath almost certainly would have registered higher values than anything observed since 1960. The inferences permitted by the chart, then, are only about history since 1960.

The judgments behind the chart offer little basis for doubting the chart’s topline conclusion. Though data from the Stockholm database for the value of weapons transferred within Afghanistan amid the U.S. withdrawal are not yet available, estimates reported range from around $10 billion to $90 billion. The Washington Post’s modest estimate of $24 billion implies the Taliban received weapons valued at 124 percent of Afghanistan’s GDP. But even the low-end estimate of $10 billion implies a value of 50.4 percent, which would render it the biggest weapons transfer since 1973 rather than 1960.  The calculation for Afghanistan in 2021 also uses the country’s GDP from 2019, the last year of data now available from the World Bank. This likely leads the chart to understate weapons transfers as a share of the local economy for Afghanistan in 2021: The economic collapse set to follow America’s withdrawal will likely reduce GDP significantly. Statistically, then, it’s safe to say that the Afghanistan governed by the Taliban just received, relative to its economy, the largest arms transfer the world has witnessed in decades.

If the subsequent histories of the cases that dot the chart offer any prologue, the question now is what armed conflict the American-made arms will be used in rather than whether they’ll be used. India’s fears about regional violence may be well grounded: Some cases augured eras of regional violence that spilled across international borders. The post-1960 record holder, Syria in 1973, was involved in the onset of the Yom Kippur War that started that same year. The “runner-up” in the data, Eritrea in 1998, initiated a brutal war with Ethiopia that lasted until 2018. Others correspond to conflicts that mark the onset of civil wars that, like demons trapped inside a set of borders, haunt countries for decades. Arms shipments to the Houthi rebels, who keep Yemen’s civil war in the headlines even today, led Yemen to the top of the list as early as 1995. Deemed the world’s “most failed” state by The Economist in 2015, Somalia topped the list as early as 1976.

But even this grim history likely understates the downside risks created by the American weapons cache left in Afghanistan. Historically, to receive a macroeconomically significant sum of weapons, a government like the Taliban’s must be given them deliberately, by some supporting country. But the Taliban acquired their cache of weaponry as if by lottery-like chance amid Afghanistan’s unexpectedly hasty collapse, a scenario unintended basically by anyone but the Taliban. Economists often use cases of lottery-like luck as “natural experiments” to identify the causal effects of something, such as the “resource curse” that can haunt places when a natural resource like oil just happens to be there. But what follows when a new government happens into a treasure trove of weapons rather than oil — and when that weaponry is so vast and so sophisticated that no friendly government could possibly have furnished it? No one knows. Yet.