You are reading this, probably, the morning after, or the day after. But I am writing on Tuesday morning — before the outcome of Boston’s mayoral election is known. No problem: because my point is unrelated to the outcome.

A report from the Associated Press begins,

Are Arab Americans people of color?

The question has been bubbling beneath the surface of Boston’s historic mayor’s race, where one of the two candidates, Annissa Essaibi George, has found herself challenged on the campaign trail about her decision to identify as one.

Wouldn’t it be interesting if people in this country identified as Americans, or simply human beings, and ceased to fret over this “of color” business?

As critics — and even some appreciators — often remind me, I am a dinosaur. And that includes clinging to the idealism — the Americanism, I would say — of the mid 20th century. I think “identity politics,” in almost every circumstance, stinks.

• A long time ago, 60 Minutes had a segment called “Point-Counterpoint.” It featured James Jackson Kilpatrick and Shana Alexander. He was a conservative, she a liberal. Saturday Night Live spoofed “Point-Counterpoint” — with Dan Aykroyd and Jane Curtin as the debaters.

Dan had a recurring response to Jane: “Jane, you ignorant slut.” This line was known all across America, from sea to shining sea.

Do you know that Quin was banned from Twitter? He really was. He wrote about it in his column, here. This is madness — and I hope, by the time you read this, the ban has been lifted.

• During the presidential campaign of 2000, SNL mocked Governor George W. Bush as saying “strategery” instead of “strategy.” Bush, being able to take a joke, went with it, saying “strategery” several times in later years. His presidential center in Dallas has a podcast: The Strategerist, hosted by Andrew Kaufmann. I was honored to be a guest on it. Andrew had a co-host that day, the great Lindsay Lloyd. We talked about a range of issues: foreign, domestic, and personal. If you’re so inclined, check it out.

• Did you see this? “Harvard reserves performance of ‘Macbeth’ exclusively for ‘Black-identifying audience members.’” You sometimes have to wonder whether George Wallace, Lester Maddox, and them really lost . . .

• Target has a tagline: “What we value shouldn’t cost more.” I wonder, from an economic, philosophical, moral, and other points of view, whether that’s true.

Of course. We are in an age of boobocracy.

• Agatha Christie wrote a novel called “And Then There Were None.” Ten Republicans, only, voted to impeach Donald Trump last January. I doubt there will be any such Republican in the next Congress. Chances are, the GOP caucus will be 100 percent Trump.

Following Anthony Gonzalez, Adam Kinzinger has announced that he will not seek reelection. Tweeted Josh Mandel, “2 traitors down — 8 to go.” Tweeted Madison Cawthorn,

If you fight the MAGA agenda I will make it my life’s mission to primary the hell out of you & throw you out of Congress.

Little Adam couldn’t stand up to his constituency’s anger & my endorsement of his opponent.

In style, thought, and spirit, that is perfect — perfectly emblematic of the Party of Trump.

• You might recall “The Life of Julia.” It was a device of the Obama-Biden campaign in 2012. It showed how a woman named Julia would benefit from government policies, all life long. How the government would take care of her, really. The current administration has now followed up with “The Life of Linda.” If you want details — on either Julia or Linda — Noah Rothman has them, here.

I have a memory. In 2012, I had the weird idea that Mitt Romney, the Republican presidential nominee, should devote a good chunk of his acceptance speech at the convention in Tampa to laying out an alternative vision to “The Life of Julia.” What do conservatives (pre-Trump conservatives) want for citizens in a free republic?

Weird, yes — but I thought it was a good idea, and I still do, honestly.

• In Dallas recently, Kevin Williamson told me something interesting — maybe you know it already: Vietnamese is the third-most-spoken language in Texas (after English and Spanish). Let me propose something: Texas is a far more diverse, multifaceted, and interesting state than many of its rah-rah fans or its knee-jerk detractors know — or care to know. People have a cartoon of Texas in their head, either positive or negative.

The real Texas is far more interesting than the cartoon (either one).

• More Kevin: In a recent column, he referred to “His Majesty, the Baby” — meaning, the public. “King Baby has only one law,” wrote Kevin: “I want!”

This reminded me of a Michael Kinsley collection of the mid ’90s: Big Babies. Kinsley’s contention was that the public was a big baby who wanted, for example, low taxes and high government services. I sort of resented Kinsley and his arguments at the time (more than “sort of”); he was right about the babiness, or fickleness, though.

• The latest on Sheriff Joe (one of Trump’s pardonees)? “Arpaio legal tab hits $100M as taxpayers foot his last bills.” (Article here.) The thing about these “friends of the people” — they can turn out to be damn costly.

• I highly recommend an article by Bret Stephens, on America and Jews. Go here. He identifies “four grave challenges”: (1) “Race is replacing ethnicity as a defining marker of group and personal identification in the United States.” (2) “Success is becoming ‘privilege,’ and excellence is giving way to equity.” (3) “Independent thinkers are being treated as heretics.” And (4) “Conspiracy thinking has gone mainstream.”

I would like to quote something that comes under (2):

Now this is changing.

• I was interested to read this obit: “Dr. Aaron T. Beck, Developer of Cognitive Therapy, Dies at 100.” A very interesting fellow, this Beck — a brainy child of immigrants. A compassionate one, too. Many people — including people I know — responded to his death by saying, “He helped me greatly.” Some even said he saved their lives.


One could do worse, in one’s career, in one’s walk.

• A little language? I have lived to see “intend on” (instead of “intend to”) appear in major publications. Time was, “intend on” belonged to the vernacular: “I intend on goin’ to the barbecue.” But now? Mainstream City. I also see “on accident,” instead of “by accident,” increasingly. (I think people borrow from “on purpose” to arrive at “on accident.”)

During a football game last weekend, an announcer said “conversate,” just as nice as you please — which made me smile.

• A little music? And dancing? Jane Powell passed away not long ago. What a talent — a huge, versatile talent. You want to see her and Fred (Astaire) do “How Could You Believe Me When I Said I Loved You When You Know I’ve Been a Liar All My Life?” Go here. To think, this was once popular (as opposed to highbrow) entertainment. Genius, from soup to nuts.

• In Central Park, fall is falling. Have a glimpse. 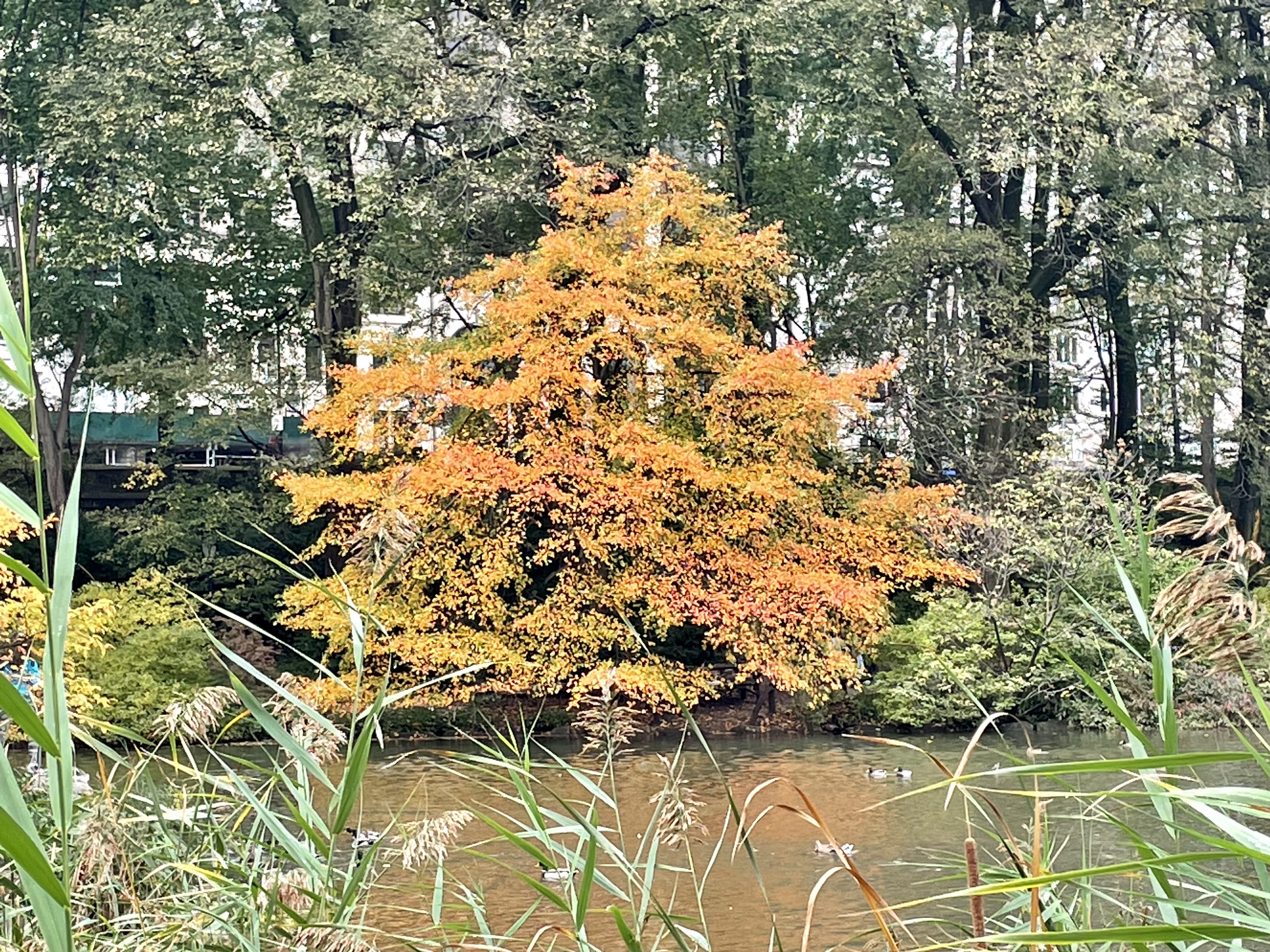 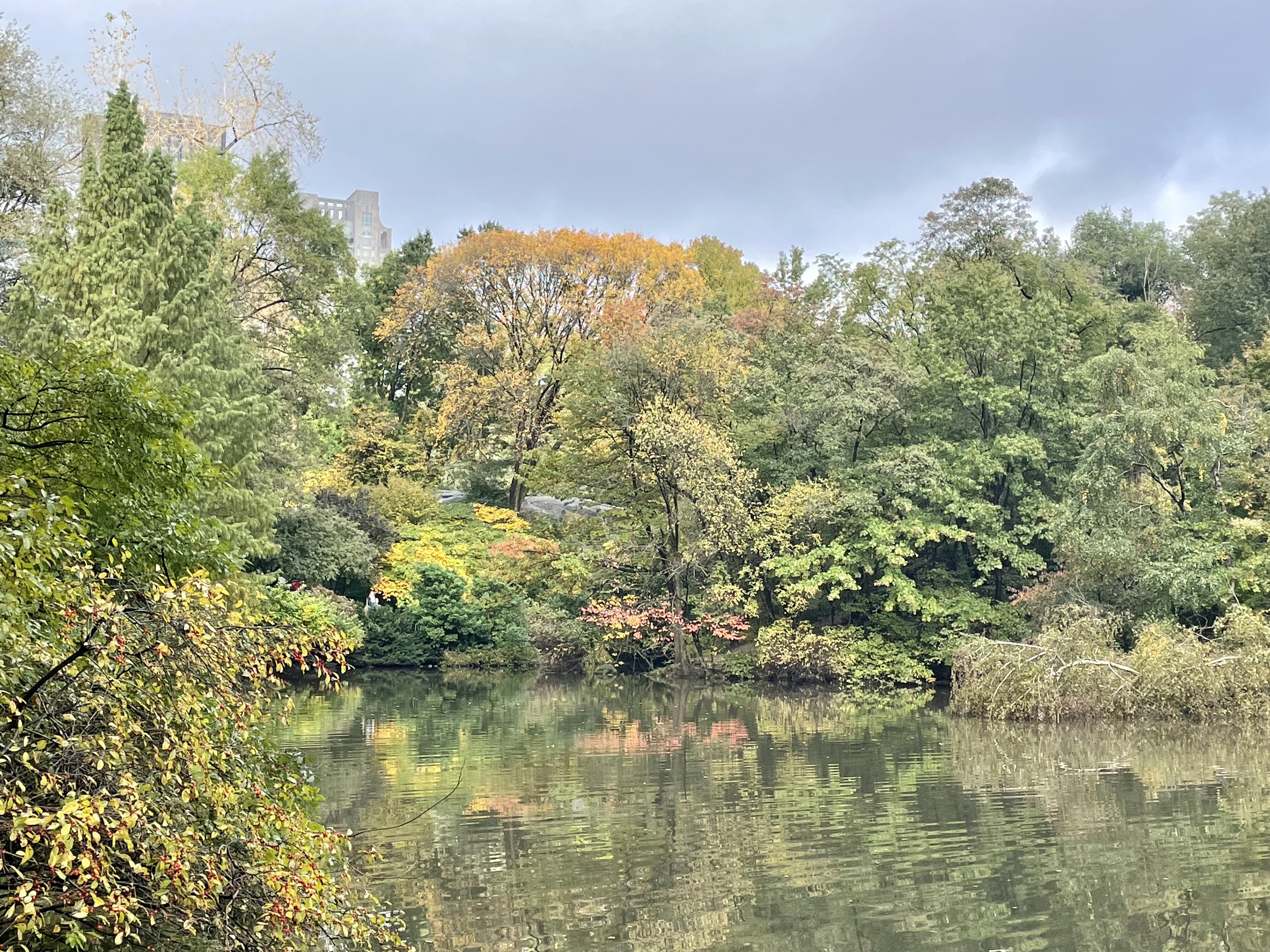 An Italian restaurant in the city really did up Halloween right. 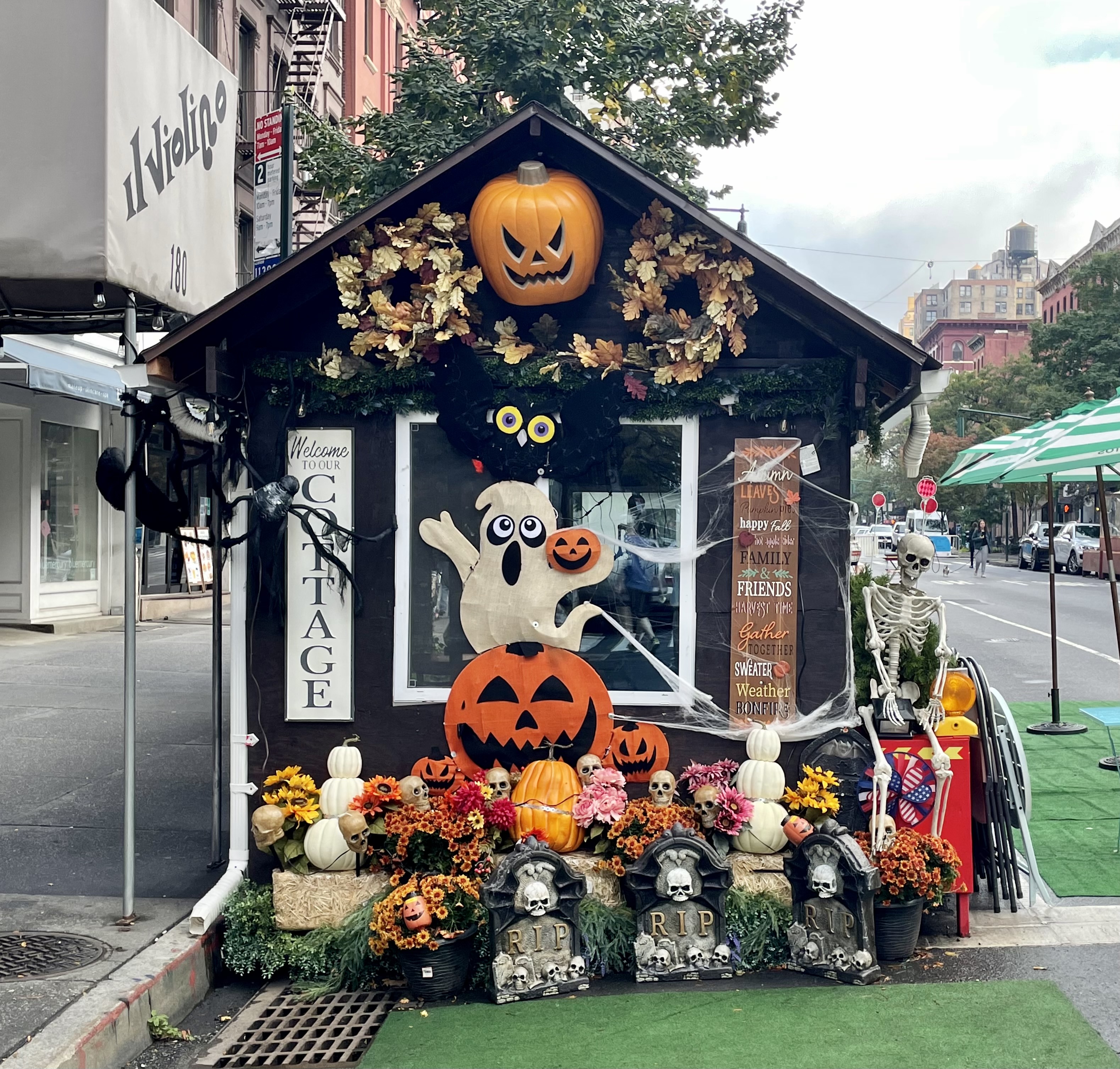 See this little pooch? Trick-or-treating, he was dressed in Chinese takeout containers, including chopsticks. He was representing, I understood from his human companion, “chow mein.” 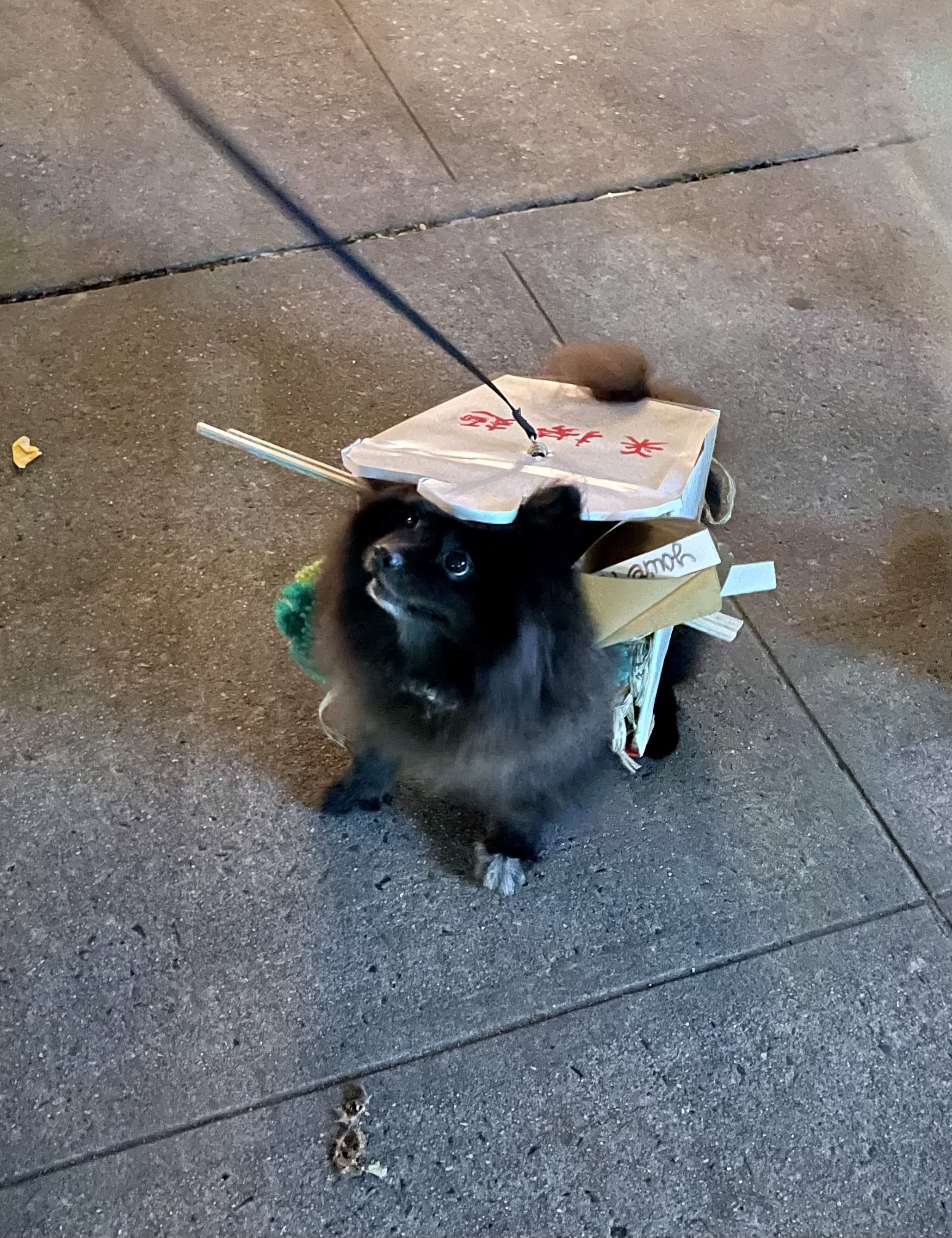 Thanks for joining me, my friends, and I’ll catch you soon.

The 15-year-old is set remain on probation in a juvenile detention facility until his 18th birthday.
Isaac Schorr

'The grotto is a place of prayer, peace, and healing. We pray for the person or persons who desecrated this sacred space,' the church said.
Brittany Bernstein

Predatory Putin Has Sniffed Out Fear in the West

Only firmness can stop Russia. But no leader in Europe or the United States is in a position to show strength.
Itxu Díaz

Dan McLaughlin
We should call the attack on Ilya Shapiro what it is: an immoral, dishonest, and scurrilous smear campaign.