Ortega in Nicaragua; dissidents in Cuba; MTG and Farrakhan; Rita and Fred; an orange McLaren; and more

Why do they bother? Why do dictators bother going through the motions of a “presidential” “election”? I guess they want a fig leaf. Saddam Hussein, you remember, got 100 percent, with a 100 percent turnout. Hard to do better.

Putin goes through the motions too. So does General Sisi, in Egypt. In 2018, he had an opponent — a nominal opponent. Who endorsed him.

In Nicaragua, Daniel Ortega has gone through the motions. Barely, though. He imprisoned his rival candidates. These include Félix Maradiaga and Arturo Cruz Jr. (I did a Q&A podcast with Félix — a great man — two years ago.)

The world seems awake to the evil in Nicaragua, however. Luis Almagro, the secretary-general of the Organization of American States, said that Ortega created “the worst possible circumstances for an electoral process.” The European Union said that the election completed “the conversion of Nicaragua into an autocratic regime.” President Biden denounced a “pantomime election” and called for the release of political prisoners.

Did anyone back and congratulate Ortega? Sure — Russia, Cuba, and Venezuela, for three. Authoritarians are very good at being in alliance with one another; democrats should be half as good.

To wax personal: Ortega first seized power in the summer of 1979, when I was between my eighth-grade and ninth-grade years. I ain’t in junior high no mo’. There was a democratic hiatus. But soon Ortega and the Sandinistas were back, and they have lorded it over Nicaraguans — squeezing and beating the life out of them — for a very, very long time.

• The Cuban Communists, of course, have been in power since 1959 (New Year’s Day). I commend to you an article by José de Córdoba and Santiago Pérez of the Wall Street Journal: “Cuba’s Dissidents Dig In Despite Government Crackdown.” The subheading: “Activists, artists and professionals challenge the Communist regime even as hundreds of protesters face contempt, sedition and sabotage charges.”

Why do they do it? Why do they continue to dissent and protest, knowing the (brutal) consequences that await them? This is desperation. It is also courage, great courage. And love — love of freedom, love of truth, and love of one’s fellow man.

(For a Q&A I did last summer with José de Córdoba — a veteran Cuban-American newsman with many interesting things to say — go here.)

• Raúl Rivero Castañeda has died at 75. He was one of the outstanding Cuban dissidents — dissident writers. He did not start out that way, however. He was a writer, certainly, but not a dissident. In fact, he was known as “the Poet of the Revolution.” He was Cuba’s chief pressman in Moscow. He was head of the Cuban writers-and-artists union.

In short, he was the perfect writer, from the regime’s point of view.

But then, like many before him, he changed his mind, becoming a democrat and a thorn in the side of the regime. He stuck his neck out, exhibiting great bravery. He was of course arrested and imprisoned — and finally exiled to Spain.

Many years ago — 15? — I was struck by something he said. This concerned the difficulty of being a writer — an independent writer — in Cuba. You had trouble even getting basic materials. Rivero said that, when foreigners visited him, they sometimes asked him, “Is there anything I can do for you?” Rivero would answer, “Yes. Leave me your pen.”

• I will quote from a news article:

In a new report released Tuesday, the museum’s Center for the Prevention of Genocide says there is now “a reasonable basis” to believe that previously alleged crimes against humanity versus the Uyghurs are growing amid a concerted campaign to hide their severity.

Let me repeat myself, concerning the Uyghurs: No one in the future will be able to say, credibly, “We didn’t know. We just didn’t know.”

• Turn now to U.S. politics. For The Dispatch, Oliver Wiseman wrote a report on the latest gathering of the “national conservatives,” as they call themselves. (These are nationalists of varying stripes. Many, I would not call “conservative” at all.)

Yes. Olly acts as a kind of anthropologist of the Right.

A word about the common-gooders. Oddly, they are often hostile to vaccination, masking, and other public-health measures — in a pandemic that has killed 750,000 Americans. I wonder: What are common-gooders good for? It seems to me you need them more than ever in something like a pandemic.

• Have you seen this from Marjorie Taylor Greene, that pin-up of the GOP?

. . . I also found out that the Nation of Islam sees the use and benefit of Ivermectin and is very angry that our media, Democrats, and Dr Fauci have attacked the drug and refuse to save people’s lives by not promoting it and shunning the use of it. We have common ground there.

• This, too, is perfect: A January 6 insurrectionist, wanted by the FBI on six counts, has fled to Belarus. Lukashenko’s state television had a segment: “Goodbye, America!” (And good riddance.)

• I was in my local store the other day, and I thought of a phrase: “the shelves were white.” Yes, the shelves in front of me were mainly white. The usual goods were missing. No big deal, in my neighborhood: I went to another store, where the shelves were normally stocked, more or less.

Many years ago, I was speaking with Angela Gheorghiu, the Romanian soprano, about her upbringing. “The shelves were white,” she said. “Just white. There was nothing.”

• Speaking of Romanian sopranos: Here is my review of La bohème at the Metropolitan Opera on Tuesday night. The title role was taken by Anita Hartig, who is one. (A Romanian soprano, I mean.)

• Care for a little language? I had occasion to tweet this:

True fact (as they say in the South): I pause before saying or writing “cavalry” and “Calvary” every single time.

Several people said, “Me too.” One person said he always heard “affidavit” as “act of David.” Another said he heard “misdemeanor” as “Mister Meaner.”

That kind of works, doesn’t it?

• Over the years, I have had occasion to tell this story, in music pieces: A regular concertgoer takes a newcomer to a concert. Elisabeth Schwarzkopf, the German soprano, enters the stage. (She was known as “the most glamorous woman in Europe.”) The newcomer gasps to his friend, “She sings, too?”


Rita Hayworth was a beauty, as everyone knows. A knockout. But, let us not forget: She was one of the greatest dancers in the entire history of show business. Astonishing.

Have a taste of her and Fred. And one more. And another.

A genius chick (who led a hard, awful life).

• All I want for Christmas is an orange McLaren. (I snapped this photo in New York the other day.) If you can’t swing it next month — I’ll take it next Halloween. 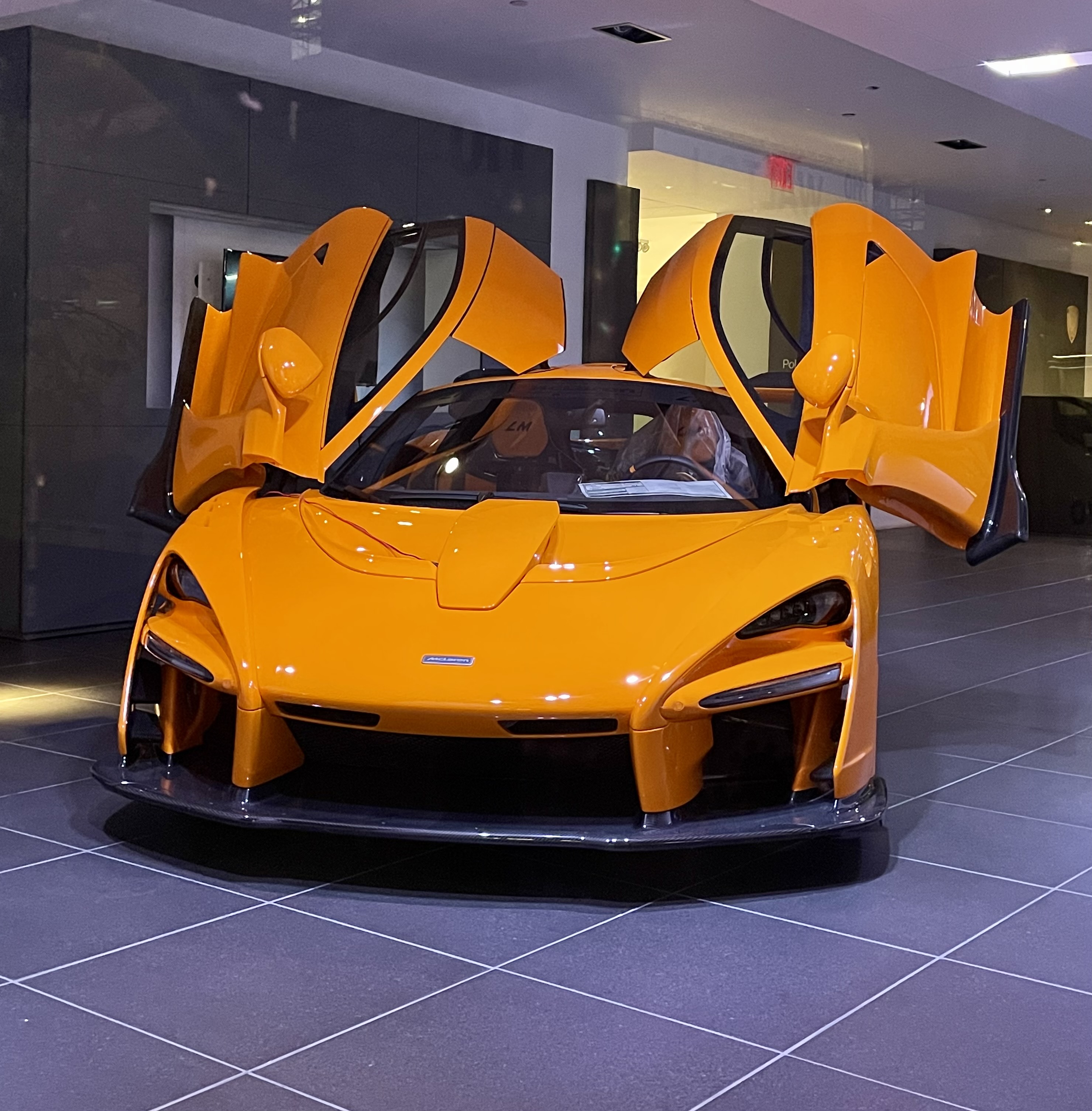 Thank you for joining me, my friends, and I’ll catch you soon. All the best.

The move is the latest in a series of rebukes to the senator from Democratic officials and donors.
Zachary Evans

The new infrastructure law’s Bridge Formula Program turns out to be a windfall for inefficient, unionized blue states.
Dominic Pino

The State Department will also reportedly begin telling American civilians in Ukraine next week to leave the country on commercial flights.
Zachary Evans

The Boston museum has always been a treasure for anyone who enters its doors, and it should focus on what makes that so.
Brian T. Allen

Support for Democrats’ Abortion Agenda Is a Mirage

Important context in considering what might happen in the event that Roe is overturned.
David Harsanyi

Alexandra DeSanctis
Republican Jason Miyares is seeking to remove Virginia from a brief that asked the Supreme Court to keep Roe and Casey.
View More
Loading...