On a popular term; Trump and the GOP; Buckley and Mailer; Justin Bieber and Taylor Swift; and more

A lot of people don’t like the term “woke,” for their own reasons. I will give you one reason to dislike it — one you may not have heard before, and one that may be a little weird.

The concept of waking up is a wonderful one, found in religion. Awakening out of error or darkness — Adam’s deep sleep — and into truth and light.

“Awake to righteousness, and sin not.”

In the past, I have said (for example), “People need to wake up to that problem.” Or, “Isn’t it great that people are at last awake to that problem?” Now, however, “woke” — the concept of being awake — is associated with political correctness.

• I highly recommend a column by Bret Stephens. Well, all of them, but I’m thinking of this in particular: “Why Wokeness Will Fail.” “American history is, in many ways, a story of grand protests,” says Bret. “They generally come in two types.”

There are protest movements “that, even in ferocious dissent, believe that the American system is ultimately geared to fulfill its inner promises — of equality, unalienable rights, the pursuit of happiness, e pluribus unum, a more perfect union.”

Then there are movements “that have turned against the system, either because they don’t think the system can meet its promises, or because they never agreed with the promises in the first place.”

The woke stuff, says Bret, is of the second kind, and will crash and burn. Which would be nice.

• “Well, the people were very angry.” That’s what Donald Trump said to Jonathan Karl, who had asked him about the mob on January 6 — the one that howled for Mike Pence. (For an article on this, go here.)

Yes, people are often angry. Sometimes, we are asked to honor this anger. From a very young age, I’ve usually thought, “To hell with that.” Everyone is angry about something, or many things — for good and bad reasons. One of the goals of civilization is to contain anger, which is to say, to keep it from erupting into violence.

Let me try something out on you: Sometimes, anger could use a little counter-anger. Almost 30 years ago, a memoir was published with a marvelous title: Makes Me Wanna Holler. I have sometimes said, or thought, “Makes me wanna holler.”

The January 6-ers are angry, sure. Well, so am I, and others: at them and other enemies of our democracy. And at the many, many people who excuse, perfume, or ignore those enemies.

“A republic, if you can keep it.” We must defend our country against its multitudinous and multi-striped foes.

• What Trump said to Jonathan Karl — for Karl’s book Betrayal: The Final Act of the Trump Show — is eye-popping, even after several years of Trump and Trumpism. Stephen Hayes, the editor of The Dispatch, jotted a tweet: “A pro-insurrection president who tried to steal an election — honored this week by Kevin McCarthy and House Republicans. Disgraceful.”

Yes. This is the trouble with people who say, “Geez, Trump is only one guy! What’s the big deal? Can’t you get over him? He’s not the whole party, you know!” But the GOP at large has disfigured itself, morally.

(Way back in June 2016, I reached for those words. After Trump won the Indiana primary, finishing off his GOP challengers, I wrote: “By nominating him, the Republican party has disfigured itself, morally.” And we had only just begun, as a song has it.)

• Trump and his people worked very, very hard to overturn the election, as the Karl book shows. Consult this article, for a briefing. What we need desperately, I think, is a renewed appreciation of the rule of law.

“Law is for suckers,” say extremists of various kinds. “Just win!” “Get the outcome, the hell with the process!” “What did conservatism ever conserve?” (Ever hear that one?)

But without the rule of law, we’re finished. The rule of law has to be defended, against all comers, all attackers — even if they’re your friends, or people who share your hatreds.

• You remember what Homer J. Simpson said about having children, right? “Kids are the best. You can teach them to hate the things you hate. And they practically raise themselves, what with the Internet and all.”

• Late in the 2016 campaign, when Trump was refusing to say whether he would accept the result of the election, Pat Buchanan wrote that the “populist-nationalist Right” was “moving beyond the niceties of liberal democracy to save the America they love.”

You might find, however, that an America without “the niceties of liberal democracy” is not America at all.

Which is exactly right.

• Back to the anger thing. Now and then, I recall what Roger Scruton said about Ken Minogue — one outstanding conservative thinker about another:

In many ways he was a model of the conservative activist. He was not in the business of destroying things or angering people. He was in the business of defending old-fashioned civility against ideological rage, and he believed this was the real meaning of the freedom that the English-speaking peoples have created and enjoyed. For Ken Minogue, decency was not just a way of doing things, but also the point of doing them.

That seems a billion years ago — but it bears pondering, I think.

• In recent weeks, I’ve been writing about the Saudi dictatorship, and the eagerness of people in free countries to hop into bed with them. I’ve spoken of the Premier League; Jared Kushner and his private-equity firm; and PGA Tour golfers.

How about this, from the Human Rights Foundation?

On December 5, 2021, Canadian pop star Justin Bieber is scheduled to perform at the Formula 1 STC Saudi Arabian Grand Prix 2021, a state-sponsored music festival funded by Crown Prince Mohammed bin Salman (MBS). The Human Rights Foundation (HRF) considers the Saudi regime to be one of the world’s worst human rights violators, and has contacted Mr. Bieber and his team, urging him to cancel his performance and refuse the Kingdom’s efforts to whitewash its appalling human rights record.

Come on, Biebs. (For the full HRF statement, go here.)

• Speaking of pop stars: Last Friday, a horde of young women were gathered in front of the movie theater a block from me, screaming with excitement. The cause of that excitement? Not me, I’m sorry to say: but Taylor Swift, who had shown up for an event.

A quick musical opinion: “Shake It Off” is terrific.


• F. W. de Klerk has died. Nelson Mandela, in his Nobel lecture, praised his co-laureate for having had “the courage to admit that a terrible wrong had been done to our country and people through the imposition of the system of apartheid.” De Klerk has a place in the story of South Africa, and in history more broadly.

• I smiled when I read a statement that Pamela McCorduck had made. The heading over her obit in the New York Times is “Pamela McCorduck, Historian of Artificial Intelligence, Dies at 80.” And here is the subheading: “She interviewed many of the scientists who were at the heart of the field through the end of the 1970s, and she compiled a groundbreaking history of its early years.”

Of her subjects — those scientists — she once offered the following description: “as lively a group of poets, dreamers, holy men, rascals and eccentrics as one could hope to find — not a dullard among them.”

I smiled because I once said something pretty much identical. About the Nobel peace laureates, whom I wrote about in a history of that prize, I said, “There’s not a dullard in the bunch.”

• Reading the obit of Graeme Edge — “Drummer and Co-Founder of the Moody Blues” — I thought of Bill Buckley. And Norman Mailer. Why?

The Moody Blues, as the obit explains, got the reputation of a thinking person’s rock band. Its kind of music would later be called “art-rock.” Speaking to an interviewer in 2006, Mr. Edge said, “We used to think that we were aiming at the head and the heart, rather than the groin.”

All right. Buckley and Mailer? Bill once said about Mailer something like this: “So much talent. If only he’d lift his gaze above the world’s groin.”

• “For a 96-Year-Old Veteran, the Parade Came to Him.” That was a story last week in the New York Times, by Andy Newman. The subheading: “Jack Le Vine usually spends the holiday doing ‘nothing’” (the holiday being Veterans Day). “His Brooklyn neighbors had other plans.”

A caption under a photo says, “Mr. Le Vine has lived his entire life on 18th Street in the South Slope, but on Thursday, he met some of his neighbors for the first time.” And let me quote the last few paragraphs:

Outside were a mother on in-line skates and twin 8-year-olds on scooters. The girl had made a flag of pink, white and turquoise tissue paper and affixed it to a paper towel tube and hung it from the gatepost.

“We are so, so grateful,” the mother, Ariel Clark, told Mr. Le Vine. “My grandfather was in Auschwitz.” Her voice tightened and sped up.

“My father was born in a displaced persons camp and so” — she gestured at her children — “without you, none of this would be possible.” She began to weep.

A droplet formed at the end of Mr. Le Vine’s nose. He squinted. He shook the hands of Ms. Clark and her children, posed for a picture with them and went back inside. “My eyes water sometimes,” he said.

• A little shot of Central Park, all fall-like? 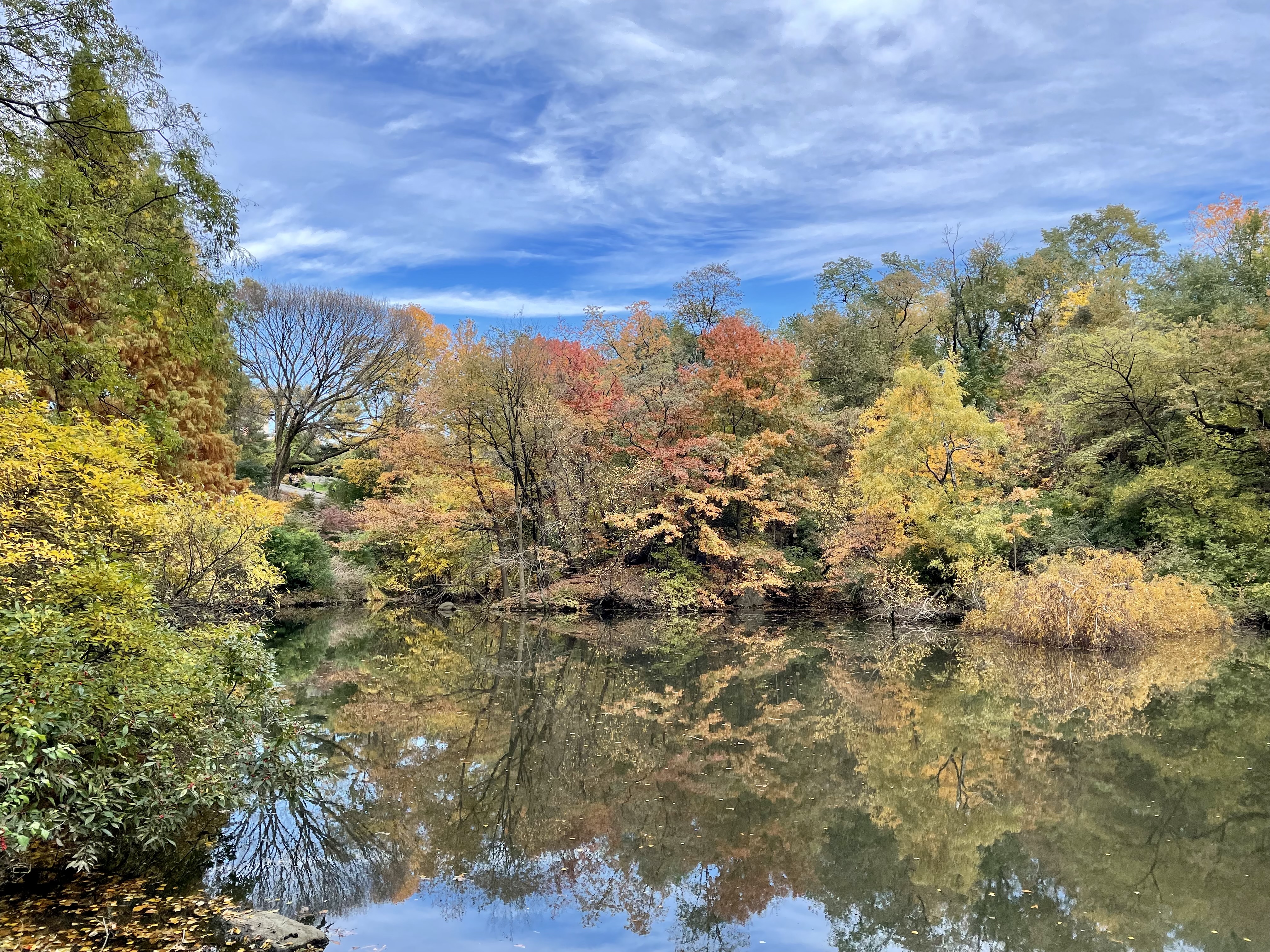 Thank you for joining me, everybody. Hope you have a good week. Keep on keepin’ on, as we used to say.

The move is the latest in a series of rebukes to the senator from Democratic officials and donors.
Zachary Evans

The new infrastructure law’s Bridge Formula Program turns out to be a windfall for inefficient, unionized blue states.
Dominic Pino

The State Department will also reportedly begin telling American civilians in Ukraine next week to leave the country on commercial flights.
Zachary Evans

The Boston museum has always been a treasure for anyone who enters its doors, and it should focus on what makes that so.
Brian T. Allen

Support for Democrats’ Abortion Agenda Is a Mirage

Important context in considering what might happen in the event that Roe is overturned.
David Harsanyi

Alexandra DeSanctis
Republican Jason Miyares is seeking to remove Virginia from a brief that asked the Supreme Court to keep Roe and Casey.
View More
Loading...