Jury duty is a pain, a privilege, and a must — our system depends on it. Every time I’m summoned for jury duty, as I was this week, I think of a story.

Long ago, a woman of my acquaintance was summoned for jury duty in her small town. Everyone knew each other. She knew the judge, and was minded to get out of serving.

The judge said to her, “Say you were the defendant. Say you were accused of a crime. You would be innocent, of course, because you’re not the criminal type. Wouldn’t you want the best men and women on your jury possible? The most thoughtful, the most fair-minded? People like yourself?”

Not many of us, I bet, think of ourselves as a possible defendant.

Do you know this song? “I’m Old-Fashioned,” by Kern & Mercer.

• Below is a juror-information card we had to fill out this week. I hate the Balkan stuff — race and ethnicity, not to mention the menu of sexes. But here we are. 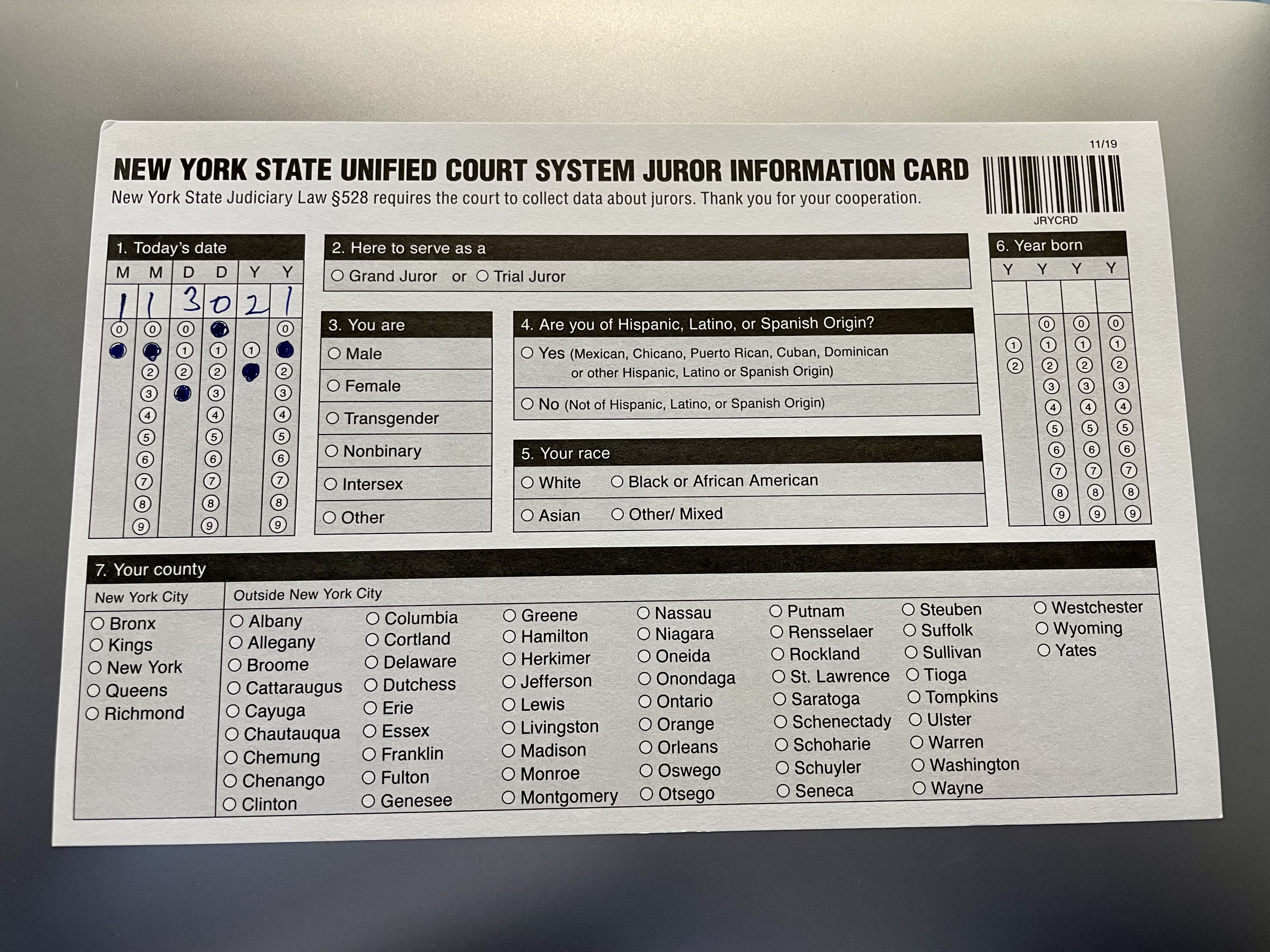 • Here is a tweet from Josh Mandel, the Ohio Republican:

Liberal Jews and radical Muslims are irrelevant to our campaign.

Evangelical Christians, Jewish conservatives and devout Catholics are our army.

Yeah, okay. But I hate this Balkan crap, I swear.

• About a week ago, a statue of Thomas Jefferson was removed from New York’s city hall. This week, I noticed an inscription on a building, hard by City Hall — words of Jefferson: “Equal and exact justice to all men of whatever state or persuasion.”

Time to get out the sand-blaster?

• One of the greatest Jefferson-appreciators I know — and there are a lot of detractors, on both left and right — is Daniel Hannan, the British writer and politician. Here is a recent column on TJ. Bright.

• Between the Baltic states and Taiwan, there is a kinship. We are talking about small countries, menaced by powerful dictatorships. Small, independent, democratic countries, living in the shadow of nasty behemoths — hungry, nasty behemoths.

This story may be of interest:

The head of the Taiwan friendship group in the Lithuanian Parliament on Monday said he and members of Parliament (MPs) from the Baltic states are visiting Taiwan to show their support for the country amid the Chinese threat it faces.

“We are here to express solidarity with you,” Matas Maldeikis, a member of Lithuania’s Parliament, told President Tsai Ing-wen during a visit on Monday morning.

Maldeikis is leading a joint delegation made up of MPs from Lithuania, Latvia, and Estonia who arrived in Taiwan to participate in a conference on democracy to be held later this week in Taipei.

• Ukraine, too, needs all the support it can get, as Russian troops mass along the border. One thing I have noticed about our nationalists, here in America: They tend to be disdainful of Ukrainian nationhood. Ukraine ought to be right up their alley. But no. Many of our nationalists tend to be Putin-friendly or Putin-defensive. This ought to be the subject of doctoral dissertations, I think. Maybe it has been.

• By “nationalism,” people mean different things, of course. You need to find out what they’re talking about, when they use that word.

One of the most infuriating stories I have seen in recent days is this one: “Interfaith love a risk amid India’s Hindu nationalist surge.” Have a taste of it:

Arbaz Mullah’s love story began, as romances often do, when he first laid eyes on the woman of his dreams, Shweta Kumbhar.

Over nearly three years, their courtship in many ways resembled that of any other couple: They went on dates and to movies, snapped selfies, frequented public parks, made each other promises to get married. But those secret vows would never be fulfilled.

The romance so angered relatives of Kumbhar, a Hindu, that they allegedly hired members of a hard-line Hindu nationalist group to kill 24-year-old Mullah, who was Muslim.

They did exactly that, according to police. On Sept. 28, his bloodied and dismembered body was found on a stretch of railroad tracks.

Call it “nationalism,” “ethno-nationalism,” “religious nationalism,” whatever you want: It is a mindset that kills — kills love and just plain kills. And decent people ought to oppose it with all the strength they can call on.

• Direkt36 is an independent media organization in Hungary — and as such, a valuable thing. This report is highly revealing: A top official of the ruling party told intelligence services that the greatest national-security threat to the country was the domestic opposition — i.e., critics of the ruling party.

These critics, as you know, would be hit with Pegasus spyware.

Talk about the “deep state”!

• Let me turn to an issue of higher ed — American higher ed. Several weeks ago, a story caught my eye: “Amherst College Ends Legacy Admissions Favoring Children of Alumni.” I believe there is a consensus against legacy admissions. I myself have a soft spot for them.

I think there is something nice about an association between a family and a college: members of a family going to the same college, generation after generation (as long as those members are roughly qualified). Wearing the same colors, rooting for the same team. Maybe having the same professors, for a couple of generations. Making financial contributions to the college. Having a loyalty.

This is a happy and benign kind of tribalism, I think.

I would not favor legacy admissions in Japan, say, or France: countries with a few elite universities and institutes, determining the fates of millions. That’s different. But America, with its jillion colleges and universities, dotting the land? From sea to shining sea?

Anyway, a topic to mull over and debate.

• I was in Carnegie Hall, to cover a concert. I went over to a bin of Ricola lozenges, or suckers, available to patrons. A man said, “Ah! Ricola! From Switzerland!” “Yes,” I said: “one of their great products, along with watches and chocolates.”

• A little language? As I have commented before, people are saying “intend on,” instead of “intend to,” increasingly, I find. In a news article, about golf, I spotted this: “We don’t have any intention on publicizing it.”

• Let’s have some music. A friend of mine wrote me and said, “You gotta hear this: four guys in a stairwell, singing ‘Ave Maria.’” They are wonderful: here. They call themselves “Kings Return,” and they sing Schubert’s “Ave Maria,” in an arrangement by Rob Dietz.

• Mark Roth, the bowler, has died. He was spectacular, for a stretch of years. Something in his obit made me think about the role of chance in our lives: “Bowling began to dominate his early life after Rainbow Lanes was built near his home.”

You know what? Roth went on to buy Rainbow Lanes, with a partner. Pretty neat.

• This is neat too: “Jim Harbaugh embraces season of giving with generous gesture to Michigan employees.” Jim is the coach of the University of Michigan football team; his brother, John, is the coach of the Baltimore Ravens, in the NFL. Jim and John once met in the Super Bowl, when Jim was coaching in that league.


As the pandemic took hold, employees of the Michigan athletic department had their pay cut. What Jim is doing is giving them money, to make them whole, so to speak — to bring them back up to par.

My man. (We have been friends since the fifth grade, I believe. Jim went farther in sports than I did, for some reason. Can’t explain it. He spent about 15 years in the NFL as a quarterback, before starting his coaching career.)

• Speaking of Ann Arbor: A woman close to me tells me the following:

I wanted to suggest to my daughter that we go to the University of Michigan Art Museum together. Well, the “big show” this week is “The Sex-Ed Class You Never Had,” and they are giving out free condoms. I wonder if they still have paintings.

That would be radical.

• Couple of pix? In Lower Manhattan, a touch of Old New York — wonderful: 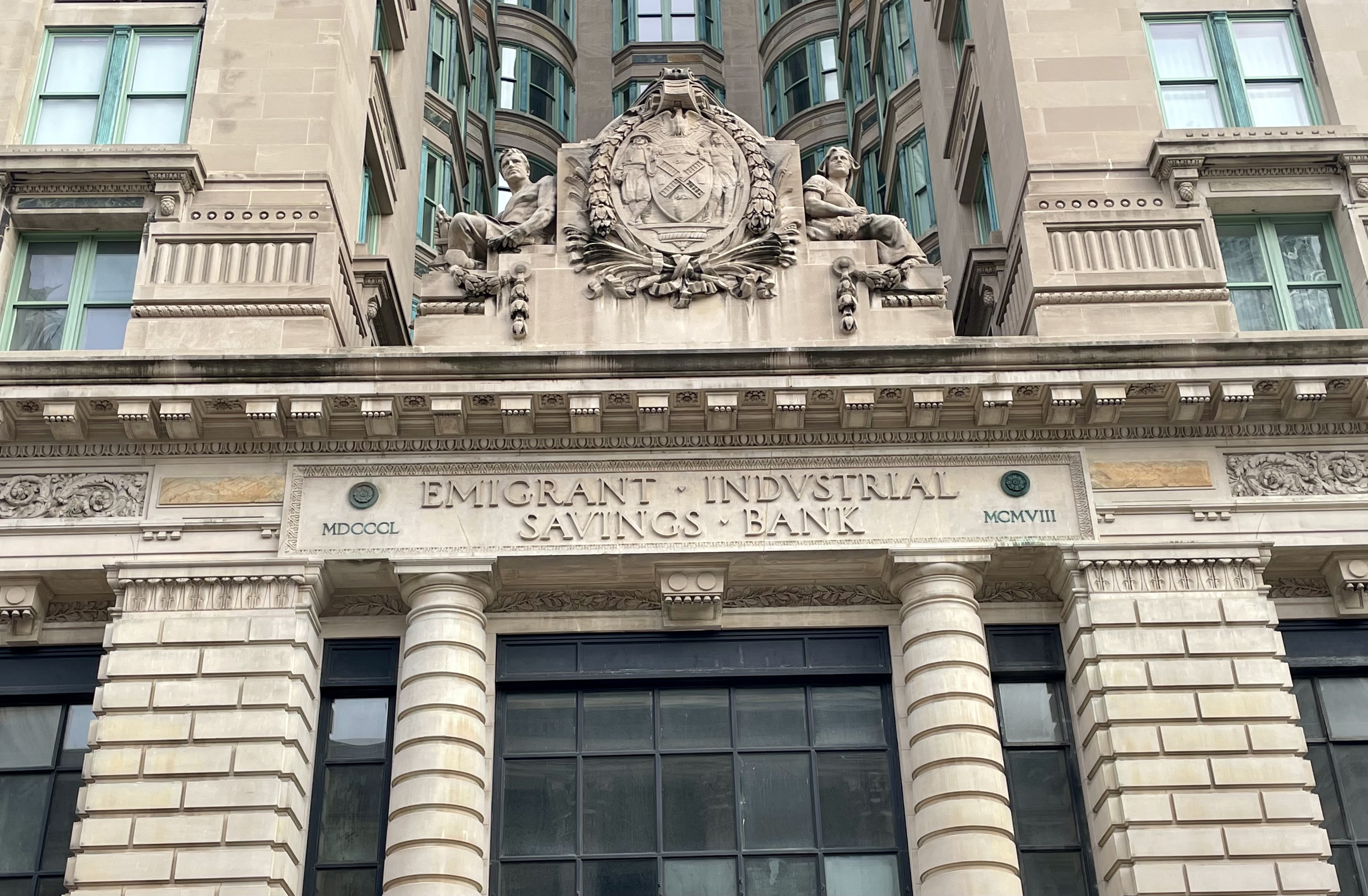 • I like this, muchly: “The true administration of justice is the firmest pillar of good government.” 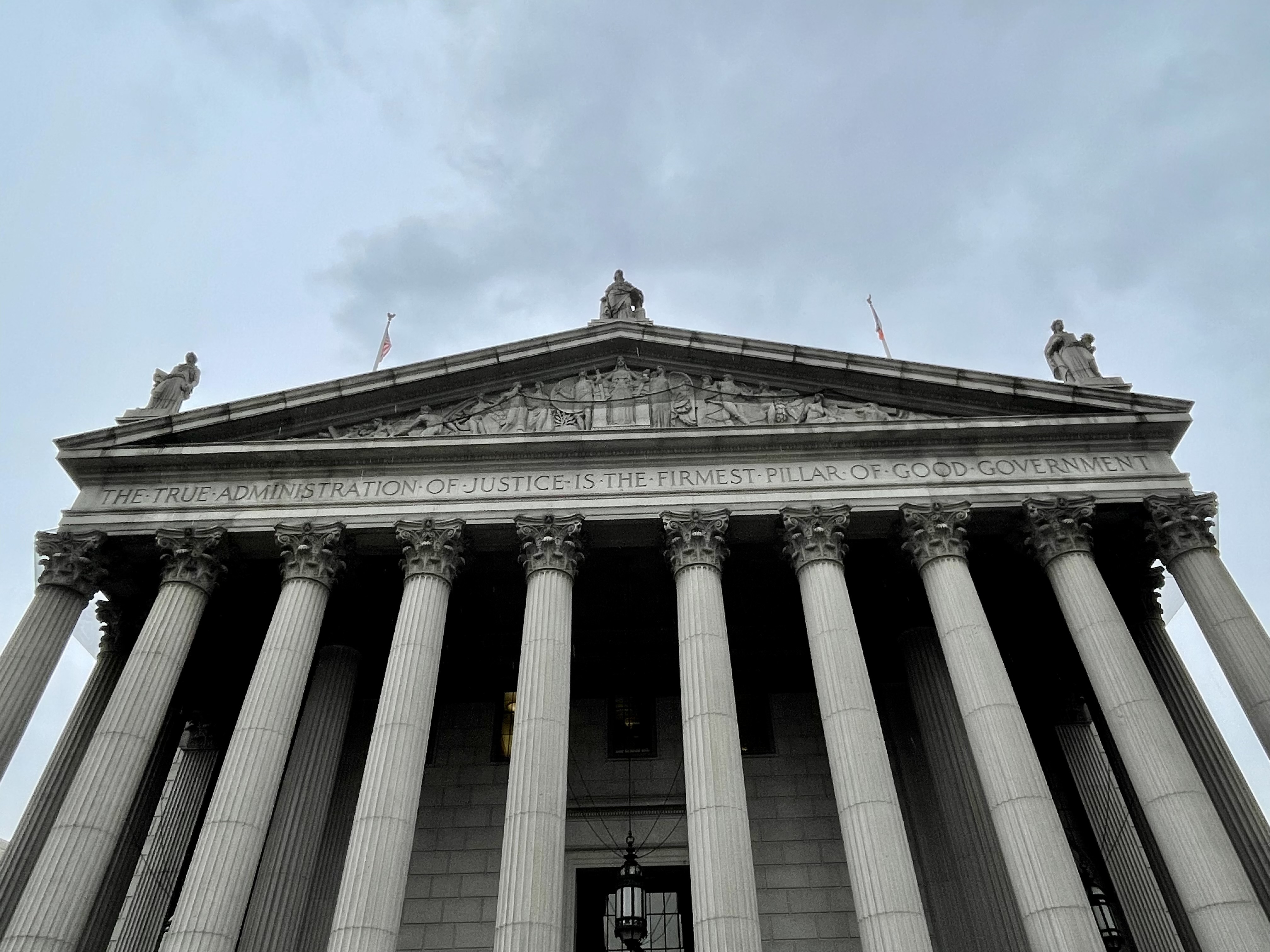 • And this? Kind of a fall-winter-Christmas scene: 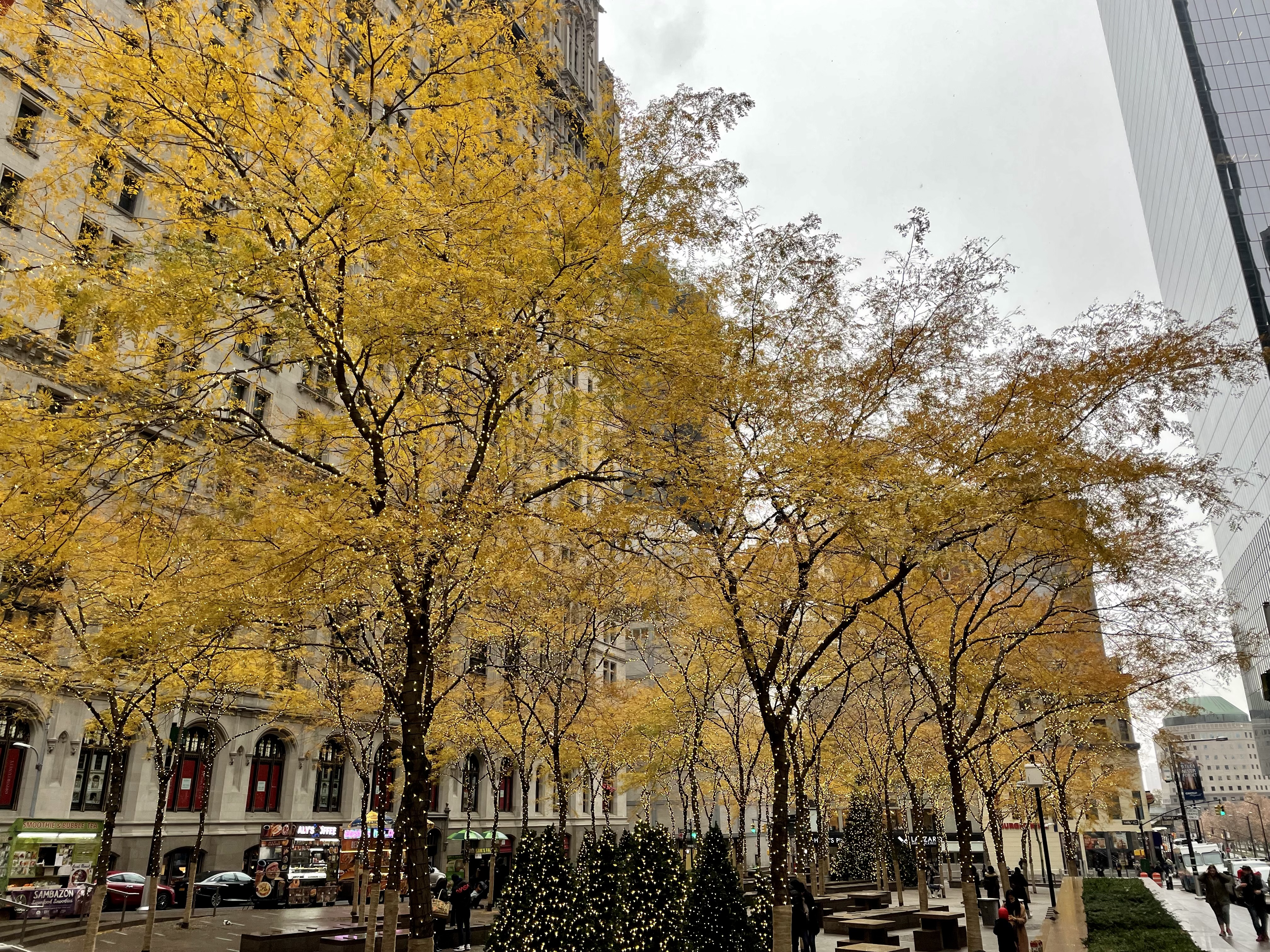 Have a good one, my friends. Thanks for joining me.

Students who don't wear masks indoors or on the school bus ‘will be precluded access to face-to-face instructional programming until they comply.’
Brittany Bernstein

Marchers for Life Vow to Continue Fight Even If Roe Overturned: ‘Abortion Won’t Go Away’

Given the conservative majority on the Supreme Court, many protestors were filled with optimism.
Caroline Downey

Michael Brendan Dougherty
Denying Russia a sphere of influence or defending the ‘liberal world order’ — are those real concerns for Americans?

The Editors
They burned political capital to question the legitimacy of the next elections and lay the foundation for an assault on our traditions of governance.
View More
Loading...