This Day in Liberal Judicial Activism—August 4

This Day in Liberal Judicial Activism—August 3

This Day in Liberal Judicial Activism—August 1

By a 5-4 vote (with the liberals and the Chief Justice in the majority) in Calvary Chapel Dayton Valley v. Sisolak, the Supreme Court on Friday denied the emergency application in which a church sought an injunction that would require Nevada governor Steve Sisolak to allow it “to hold in-person worship services on the same terms as comparable secular assemblies.”

The justices in the majority did not offer a word of explanation for their ruling. Justice Alito (joined by Justice Thomas and Justice Kavanaugh) wrote an 11-page dissent, Justice Gorsuch set forth his dissent in a single paragraph, and Justice Kavanaugh added his “further comments” in a 12-page dissent. (See first link above for all the dissents.)

This ruling seems very difficult to justify, as these passages from Alito’s dissent (citations omitted) illustrate:

The Constitution guarantees the free exercise of religion. It says nothing about the freedom to play craps or blackjack, to feed tokens into a slot machine, or to engage in any other game of chance. But the Governor of Nevada apparently has different priorities. Claiming virtually unbounded power to restrict constitutional rights during the COVID–19 pandemic, he has issued a directive that severely limits attendance at religious services. A church, synagogue, or mosque, regardless of its size, may not admit more than 50 persons, but casinos and certain other favored facilities may admit 50% of their maximum occupancy— and in the case of gigantic Las Vegas casinos, this means that thousands of patrons are allowed….

The face of the directive provides many examples. While “houses of worship” may admit “no more than fifty persons,” many favored facilities that host indoor activities may operate at 50% capacity. Privileged facilities include bowling alleys, breweries, fitness facilities, and most notably, casinos, which have operated at 50% capacity for over a month, sometimes featuring not only gambling but live circus acts and shows.

For Las Vegas casinos, 50% capacity often means thousands of patrons, and the activities that occur in casinos frequently involve far less physical distancing and other safety measures than the worship services that Calvary Chapel proposes to conduct. Patrons at a craps or blackjack table do not customarily stay six feet apart. Casinos are permitted to serve alcohol, which is well known to induce risk taking, and drinking generally requires at least the temporary removal of masks. Casinos attract patrons from all over the country….

Houses of worship can—and have—adopted rules that provide far more protection. Family groups can be given places in the pews that are more than six feet away from others. Worshippers can be required to wear masks throughout the service or for all but a very brief time. Worshippers do not customarily travel from distant spots to attend a particular church; nor do they generally hop from church to church to sample different services on any given Sunday. Few worship services last two hours. (Calvary Chapel now limits its services to 45 minutes.) And worshippers do not generally mill around the church while a service is in progress.

From Calvary Chapel’s application, here is a photo of a Las Vegas casino operating under the governor’s order: 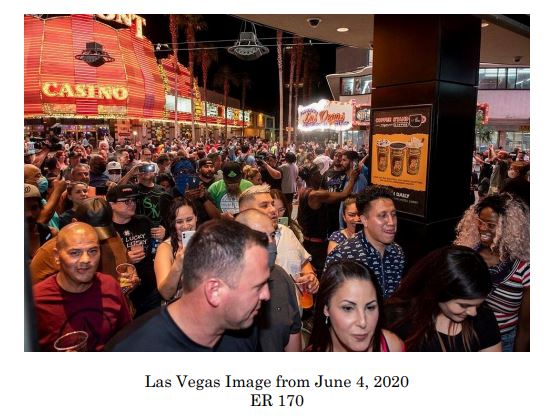 In late May, the Court, by the same 5-4 divide, denied a California church’s request for injunctive relief. In his brief opinion explaining his vote in that case, the Chief Justice relied heavily on his determination that California placed “[s]imilar or more severe restrictions … on comparable secular gatherings, including lectures, concerts, movie showings, spectator sports, and theatrical performances, where large groups of people gather in close proximity for extended periods of time.” As I explained in my post on the order, the Chief failed to address the fact that factories and offices—where people often are in large groups in close proximity for extended periods—weren’t subject to the occupancy caps that churches face. But the Chief’s determination of similar treatment wasn’t patently beyond the realm of the plausible.

I don’t see how the Chief could make a determination in this case that the Nevada governor is treating Calvary Chapel in a manner similar to how he treats comparable secular gatherings. (Even Vox’s Ian Millhiser finds Calvary Chapel’s legal argument to be “much stronger” than the California church’s—and Alito’s dissent to be “unusually persuasive.”) It would seem that he and the liberal justices are instead ready to bend over backwards to defer to any pandemic order that restricts religious liberty. That might have been understandable in the first weeks of the pandemic. But as Alito observes:

[A] public health emergency does not give Governors and other public officials carte blanche to disregard the Constitution for as long as the medical problem persists. As more medical and scientific evidence becomes available, and as States have time to craft policies in light of that evidence, courts should expect policies that more carefully account for constitutional rights. Governor Sisolak issued the directive in question on May 28, more than two months after declaring a state of emergency on March 12. Now four months have passed since the original declaration. The problem is no longer one of exigency, but one of considered yet discriminatory treatment of places of worship.