Last month I published “No Americans Need Apply,” a report on Equal Employment Opportunity Commission (EEOC) cases in which immigrants are systematically favored over natives for low-skill jobs. In case after case, employers attempt to recruit Hispanic workers (who are mostly foreign-born) while discharging or avoiding black workers (who are mostly native-born). The report refutes the claim that immigration has zero negative effects on native workers. After all, these EEOC cases would have to be rare in a world where natives are unaffected by immigrant competition. “The frequency and the consistency of these anecdotes is rather telling,” I said in a panel discussion. “If you argue there are zero negative effects on native workers from immigration, then you are out of touch with reality.”

That statement led to accusations of a strawman. Surely no one denies at least some downward pressure on wages and employment caused by immigration, right? Well, a few weeks after my report was published, the economist Esther Duflo issued exactly such a denial:

Duflo: There was a report from the National Academy of Science in the U.S. that summarized maybe hundreds of studies, and they all come to the conclusion that the effect of low-skilled migration on low-skilled wages is zero. So in other words—

As a 2019 Nobel Prize winner for her anti-poverty work in the developing world, Esther Duflo is obviously an accomplished scholar, but the Nobel does not make her infallible. In this case, her claim about the National Academies is false — not just one-sided or misleading, but false. Table 5-2 from the National Academies’ book lists major studies measuring immigration’s impact on wages. Notice the negative values in the “Wage Effect” column, meaning that native wages have gone down in response to immigration: 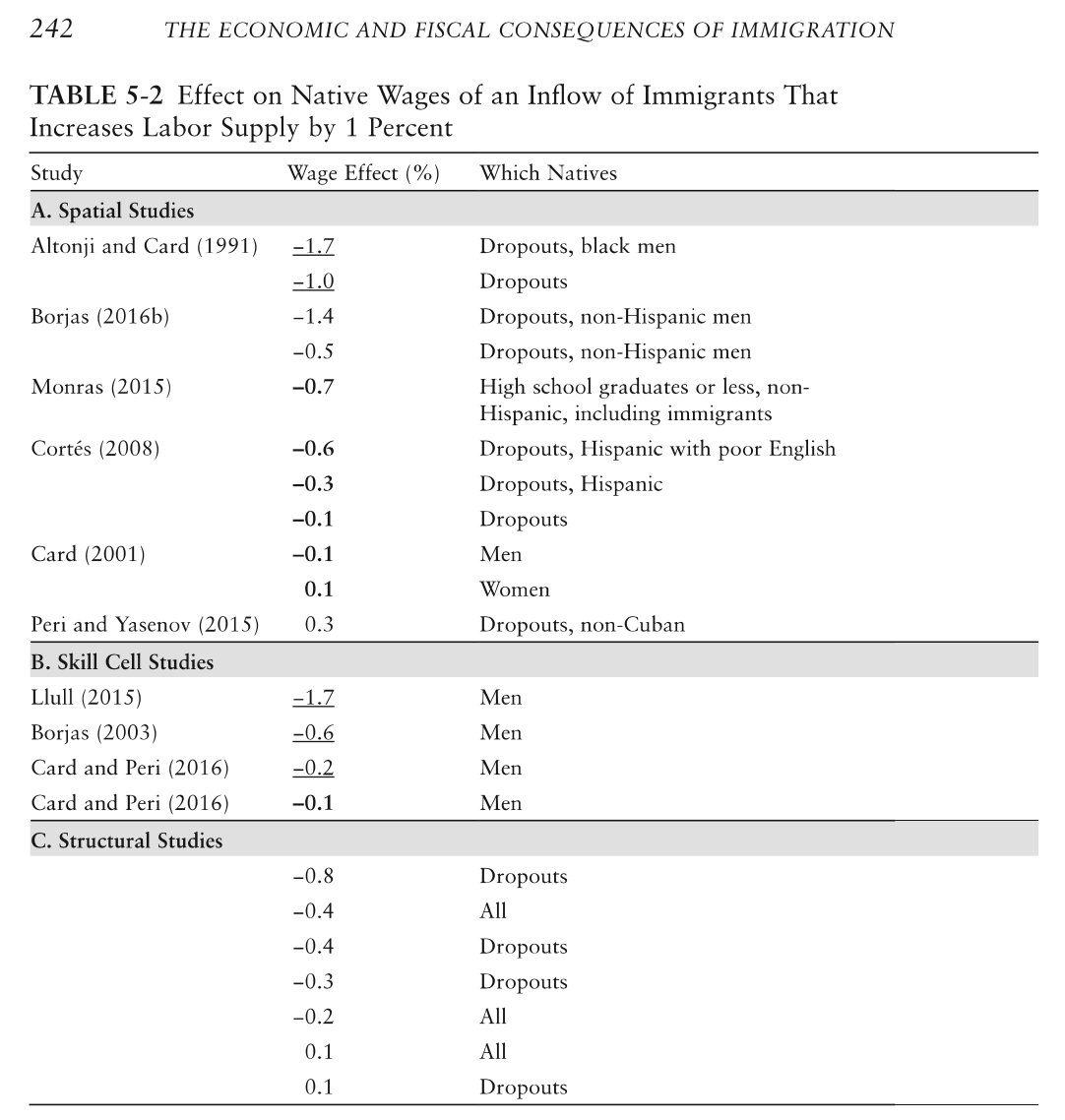 It is difficult to understand how Duflo made this error. How could someone see 18 negative signs and mentally transform them into zeroes? Some speculation: Perhaps she read the media’s one-sided summaries of the National Academies’ book and never thought to question them. It would not be the first time that elites seemed ensconced in an intellectual bubble where immigration can never have any drawbacks. “There’s no evidence that immigrants hurt any American workers,” read a 2017 headline from Vox. “Immigrants Haven’t Hurt Pay for Americans,” according to Bloomberg in 2018. “Illegal Immigrants Don’t Lower Our Wages Or Take Our Jobs,” claimed Forbes in 2015. Those inside the bubble seem unable to acknowledge that immigration has varied effects — some good, some bad — and how we weigh them depends on our values.

In our polarized times, perhaps it’s inevitable that partisans will review a complex literature and come away with a one-sided perspective. It’s my hope, however, that highlighting some real on-the-ground case studies will motivate Esther Duflo and her bubble to take a closer look at the evidence. For example, it’s difficult to read the following EEOC case summary and continue believing that immigration never hurts native workers:

According to a 2011 EEOC lawsuit, Southern Valley primarily employs Mexicans for the harvest season, but would (initially) hire Americans as well. Shortly after each harvest began, most of the Americans would be summarily discharged. ‘All you Americans are fired,’ one manager told a group of 80 who were let go at the same time. On another day that at least 16 Americans were fired, a manager stated, ‘All you black American people, f*** you all. . . . [J]ust go to the office and pick up your check.’ In an accompanying press release, the district director in the EEOC’s Atlanta office claimed that ‘the practices alleged in the lawsuit are relatively common in the industry.’ An attorney with Georgia Legal Services added, ‘Discrimination against American workers in the H-2A guest worker program is endemic. We hope this case will bring attention to that problem.’

Or how about this one:

When a warehouse in Memphis, Tenn., began using a new employment agency called Paramount Staffing to fill its daily work crew, Paramount ‘essentially replaced the African Americans with Hispanics,’ according to the EEOC. Potential workers would line up outside the warehouse each day, but Paramount would select Hispanics over blacks, even when black workers were experienced and farther ahead in line. Sometimes Paramount’s managers would send potential black workers home by announcing in English that there were no more positions. ‘After the African Americans left, the Hispanics were allowed to come into the warehouse and work.’

Now imagine reading 20 more cases similar to those. Then consider anonymous interviews with employers who confirm that they prefer immigrant or Hispanic labor. Then combine all of this qualitative evidence with the quantitative work summarized by the National Academies and with the many subsequent papers published on the topic. Eventually, the evidence of negative effects becomes so overwhelming that, to repeat myself, you would have to be out of touch with reality to deny it.

Mayor Kim Janey noted 'there’s a long history' in the U.S. of people 'needing to show their papers.'
Brittany Bernstein