On October 15, 2003, Iraq began to distribute new dinar bills, graced with the likeness of an ancient Babylonian ruler and a tenth-century mathematician. By January 15, 2004, new dinars replaced the two types of notes that were in circulation. Old Saddam dinars were swapped for new dinars at a one-to-one rate, and each so-called “Swiss” dinar fetched 150 new dinars. Bank accounts and contracts were converted at the same rates, and Iraqi salaries began to be paid in crisp new notes. The new currency became convertible into foreign currencies at market rates.

Not so fast. Iraq has lacked law and order, let alone the rule of law. Without these, we should never have expected the new notes to ignite an Iraqi Wirtschaftswunder. They most certainly have not.

Indeed, the neoconservative Paul Wolfowitz, the former Deputy Secretary of Defense and engineer of the Iraq War infamously predicted on March 27, 2003, in front of the U.S House Appropriations Committee that “There’s a lot of money to pay for this . . . the oil revenues of that country could bring between $50 and $100 billion over the course of the next two or three years . . . We’re dealing with a country that can really finance its own reconstruction, and relatively soon.” Anyone who believed in this nonsense must put great faith in the Tooth Fairy.

Just look what has happened to Iraq’s junk currency, the Iraqi dinar. On Saturday, the Central Bank of Iraq announced a whopping 20 percent devaluation of the dinar.  So, next week’s “Hanke’s Currency Watchlist,” which is nothing more than a rogues’ gallery of junk currencies, will include the Iraqi dinar: 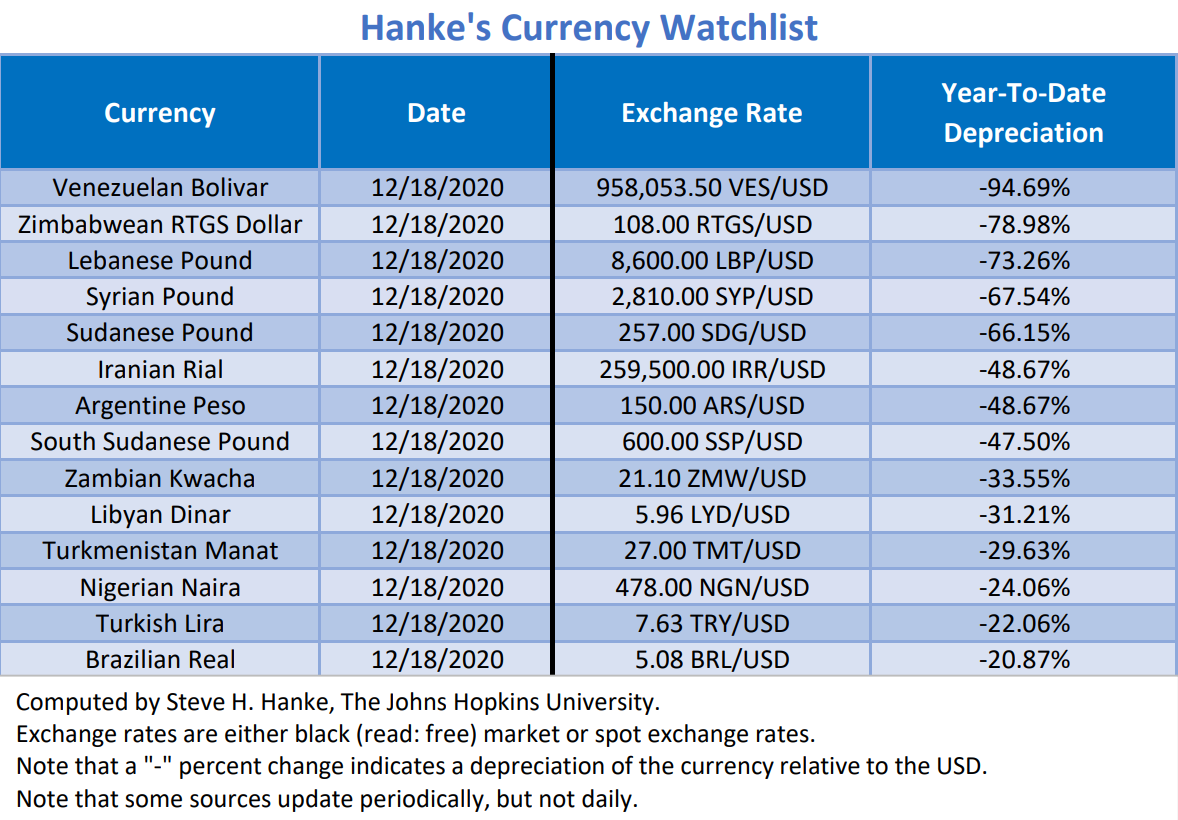 This brings me back to September 2003, when I recommended that Iraq replace the dinar with the U.S. dollar. If dollarized, Iraq would then have returned to a regime that it used from 1916-31, when the Indian rupee was its legal tender. The adoption of a stable international currency would have avoided the pitfalls of Iraqi central banking and would have immediately provide Iraqis with stable money. And, while stable money might not be everything — without it, everything is nothing.

In his targeting of the unvaccinated population, President Macron has taken France down the road of Austria, Germany, and Italy.
Alex Story

Betting on Betting: States Gamble with Their Citizens’ Futures

The house always wins, not the gambler.
Tom Copeland