It’s hazardous to generalize from a largely lower-scoring Opening Day in baseball (3.88 runs/game compared to 4.83 last season), not least because Opening Days should be lower-scoring: Every team is starting its best healthy starting pitcher on the same day. Still, given that hitting is timing and the chief enemies of pitching are fatigue and injuries, it is reasonable to wonder whether the very long layoff since last season means that we will see pitchers get the upper hand in the sprint down the stretch.

We’ve never had a season start in July before, but we do have one vaguely similar situation to compare: the strike-interrupted 1981 season, when there was no baseball between June 11 and August 10. A two-month layoff in mid-season is the closest we can use to simulate the effects of such a late start. Was scoring down? I looked on a team-by-team and league-by-league basis at scoring, comparing first-half scoring both to second-half scoring and specifically to scoring in August, and the answer is . . . things mostly went on as before: 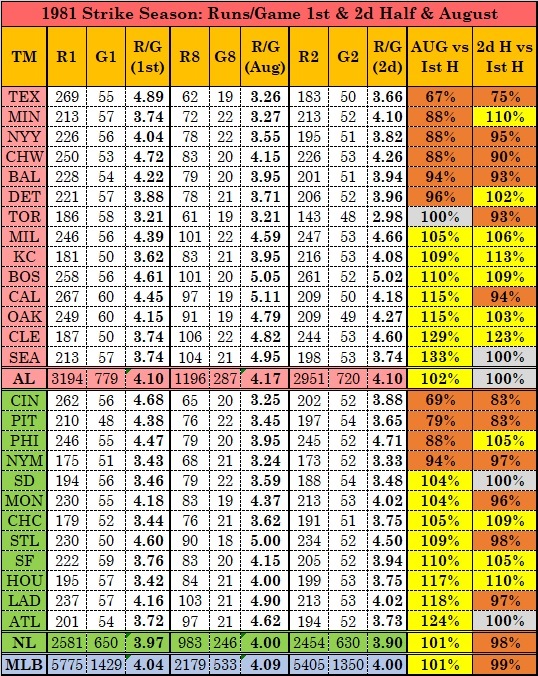 To summarize: In the American League, scoring was the same in the second half as the first half (4.10 runs per game), and slightly higher than that in August (4.17 runs per game). In the National League, scoring was down a bit in the second half (from 3.97 to 3.90 runs per game), but also up in August (4.00 runs per game). There were teams that fell off sharply, such as the Reds and Rangers, but also teams that were up, such as the Indians, Royals, and Astros. The season’s best hitter was Mike Schmidt; Schmidt was batting .284/.381/.582 when the strike hit but went wild on his return, hitting .356/.495/.719, with 17 home runs and 50 RBI in 50 games. He was not rusty. And neither, it seems, was the average major-league hitter.