Stock buybacks have often been presented as a case for dividend payments being obsolete — that companies have a consistent, repeatable, beneficial, tax-efficient way of returning cash to shareholders now that trumps dividends. I have responded to this argument for years by pointing out: (a) authorizations for buybacks do not have to be executed; (b) most buybacks just offset new share issuance being used as employee compensation; (c) you just compound risk with buybacks — you can’t eat the reverse-diluted share, and then the whammy of them all . . .

Stock buybacks aren’t repeatable, consistent, growing returns of cash to shareholders. They are the first thing to go when the going gets rough, they are inconsistent, and the actual invisible cash they represent to shareholders is dubious, to begin with, because of competing accounting realities.

As the chart below makes clear, stock Buybacks will be at their lowest level since 2013 this year. I’d argue two things: (1) stock buybacks are no substitute for all-weather return-of-cash to shareholders, but (2) next year will probably see a lot of stock buybacks . . . 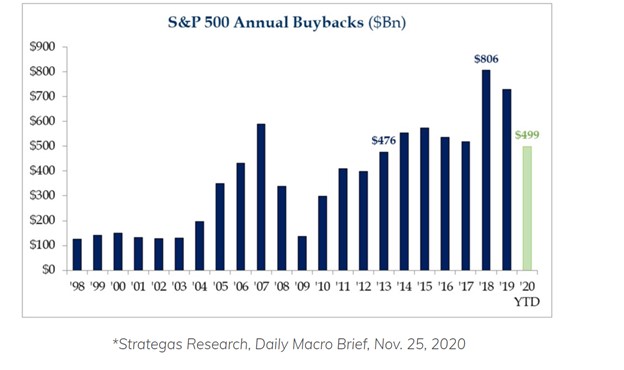 What to make of the Missouri senator’s attempt to recover the masculine ideal.
Harvey C. Mansfield

Buttigieg’s conception of virtue is personal success that can be quantified, graphed, and outlined in a PowerPoint presentation.
Nic Rowan

If you make a government institution’s legitimacy contingent on whether it gives you what you want, you should expect your opponents to respond in kind.
Kevin D. Williamson