A Claremont, Calif. church with a history of constructing controversial nativity scenes has included a bloody Trayvon Martin in this year’s rendition. The Florida teen is shown wearing a hoodie in the manager in place of an infant Jesus. 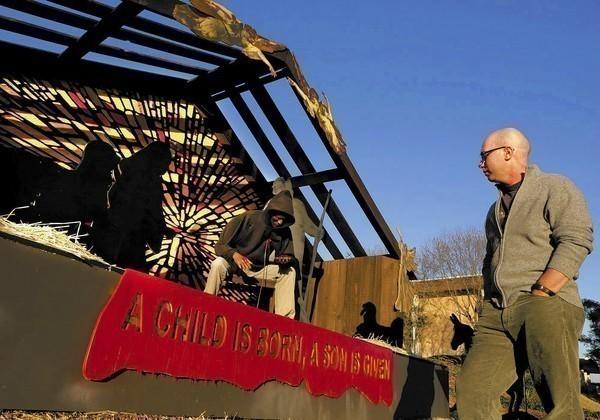 The Claremont United Methodist Church hopes the use of Martin’s images brings awareness of “other parents in agony because their children had just been killed,” according to a plaque near the scene. The scene’s designer, John Zachary, told the Inland Valley Daily Bulletin that the idea came to him when he saw a photograph of a slain Martin and wondered, “What if Jesus was lying there bleeding to death?”

Additionally, Zachary hoped to reflect the similarities between the dark time during which Jesus was born and today. He compared Martin to “the innocent children killed by King Herod.”

Zachary, who has been tasked with creating the church’s nativity scenes since 2007, has stirred up controversy before, depicting the holy family as Mexican immigrants at the border and war refugees in Iraq; in 2010, his nativity scene featured only Mary as a black woman with a child in a prison cell.

The church will keep the scene in place until January 5.

Tulsi Gabbard: Domestic-Terrorism Bill Is ‘a Targeting of Almost Half of the Country’

Tulsi Gabbard: Domestic-Terrorism Bill Is ‘a Targeting of Almost Half of the Country’

Brittany Bernstein
The former congresswoman expressed concern about how officials will define the characteristics they are searching for in potential threats.