How in the tank for euthanasia has the Canadian medical establishment become? This much: 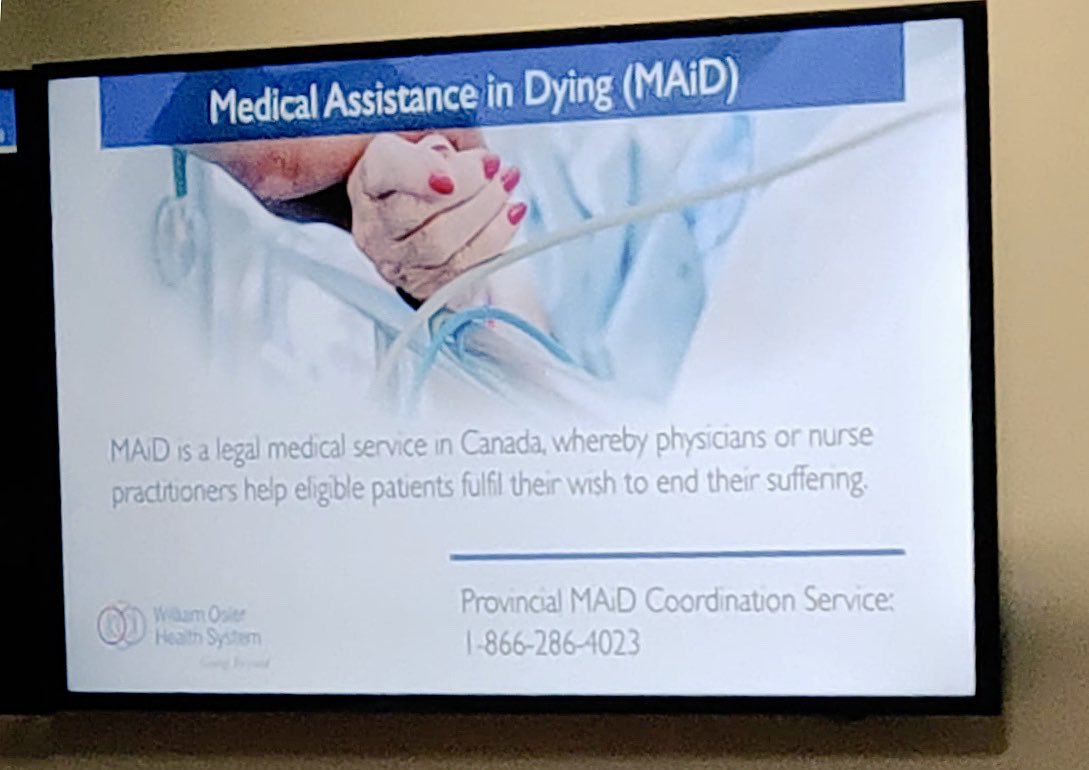 A source sent me this photograph of a public information announcement that appears on a large television screen in a William Osler Health System hospital urgent care waiting room pushing euthanasia to patients!

The ad oozes compassion. The visual is a photo of a male doctor’s hand gently resting on the arm of a woman in a hospital bed, accompanied by the following text:

MAiD is a medical service in Canada, whereby physicians and nurse practitioners help eligible patients fulfill their wish to end their suffering.

The PR notice then provides a toll-free phone number that people interested in being killed can call to obtain more information.

This is profoundly abandoning. Realize, these patients may be afraid. They may be in pain. They may be depressed. And what one act does the hospital from which they seek succor push? Killing.

The ad makes no mention of palliative care or other means to reduce or eliminate suffering without killing. It does not describe that counseling can help people regain the desire to live. There is no hint that suicide prevention services might be available. And it obscures the fact that MAiD is a euphemism for homicide by lethal injection.

Think about how shockingly far the culture of death has penetrated Canada since the country’s Supreme Court imposed it on the entire country three years ago.

This PR announcement–again, without any mention of life-affirming alternatives–demonstrates that euthanasia is not only being normalized by Canadian medical societies and hospitals, but is well on the way to being perceived by the powers that be as the “treatment” of choice for those with serious medical conditions.

At least, that’s my take away from the above. And it makes perfect sense. A society that becomes obsessed with eliminating suffering quickly embraces eliminating the sufferer as a means.

And considering that Canada has a single payer socialized healthcare system, what better way to save on costs than by gently persuading those with the most expensive conditions to choose death over fighting to stay alive? Indeed, there is already at least one case in which a disabled patient was offered euthanasia after being denied the independent living services he says he needs to maintain the desire to carry on.

Euthanasia corrupts everything it touches, including the healthcare system and a society’s perception of the value of people with serious disabilities and illnesses. Those with eyes to see, let them see.