Another Nine Boxes: When ‘Medical Waste’ Is a Mirror on the Soul of a Nation

There Is Debate about Vaccine Mandates. Can We Actually Have the Debate?

The public overwhelmingly relies on the press to provide them with accurate information and proper context. When it comes to COVID-19, many press outlets are consistently failing to do that. In fact, the reporting on data related to the epidemic has increasingly led to conclusions that aren’t accurate and an audience that is misinformed.

The perfect example was an article from The Hill that told readers Texas was seeing “thousands of new coronavirus cases days after state’s stay-at-home order lifted.” Seems rather obvious that The Hill started with a view that moving into a re-opening phase is a mistake and things are getting worse, and then looked for a way to support that conclusion. This claim managed to mislead readers in two key ways:

(1) Given the incubation period and a lag in testing, new cases that are identified on a certain day are unlikely to have any relationship to policies implemented days earlier.

(2) “New cases” is a very misleading metric because it does not account for increases in testing. The rate of positive tests in Texas has declined significantly.

Mainstream outlets have attempted to tie new cases and deaths to recent re-opening actions in Florida, Georgia, and Texas, despite it being clear that any spike in cases or deaths would not be apparent for weeks after such policy changes. Such actions could lead to a spike in new cases, but trying to tie them to those seen right now is clearly incorrect.

In addition, members of the press continue to conflate reporting of new cases with a growth in the rate of new cases. The New York Times and Axios have both recently published charts showing large increases in new cases around the country when New York is excluded from the data (though the latter has since updated its article containing such a chart to account for criticism similar to my own). Those outlets and other members of the press then wrongly used the charts to justify claims that the number of new cases is not going down and the “U.S. curve isn’t bending.” These charts do not account for massive increases in testing throughout the country. Charting the same data (Chart 1) relative to testing increase (Chart 2) and in the form of positive testing rates (Chart 3) makes it clear that the rate of new cases is actually decreasing. 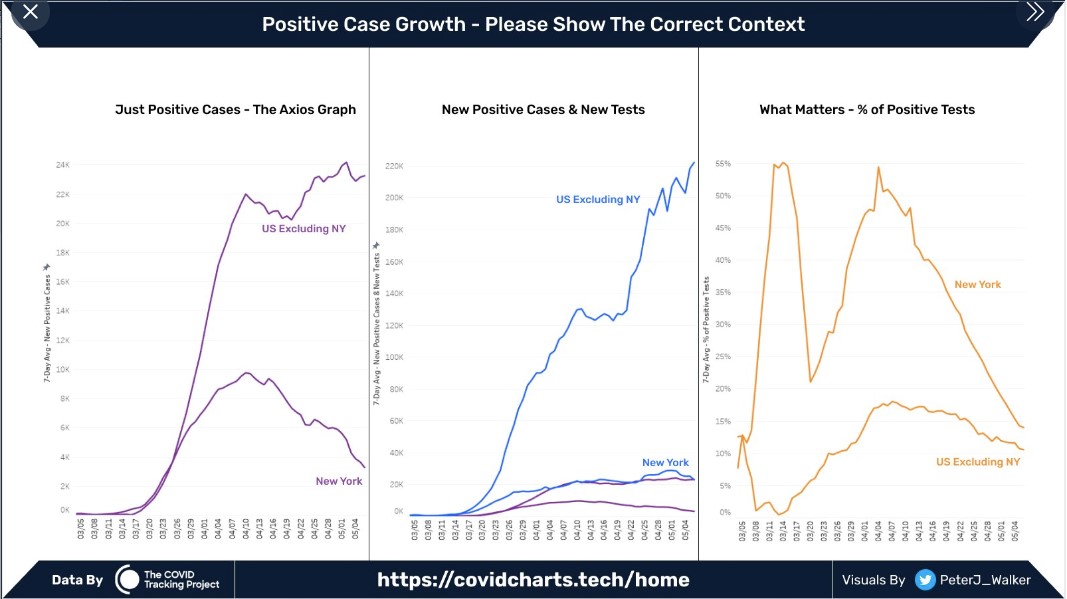 The same outlets that raised concerns about the United States lacking sufficient testing are now interpreting the data in a way that punishes testing increases. The result is that many readers have been misinformed into believing that the situation is getting worse, which has the unintended consequences of feeding into false claims that the actions we have taken so far were ineffective.

In attempting to find support for a narrative that things are getting worse and red states are making a mistake in considering moving to a re-opening phase, these outlets have resorted to misleading their readers. If media outlets expect to be trusted on this subject, they need to present the data in an accurate way and with proper context instead of looking for ways to support their pre-determined conclusions.

The commission kicked the can again — just as it was designed to.
Dan McLaughlin

What the Gupta–Rogan COVID Conversation Revealed

Though marred by misunderstandings on each side, it was a surprisingly productive discussion.
Pradheep J. Shanker

The board member was already facing a recall effort.
Zachary Evans

Six months after MLB pulled its All-Star Game out of Georgia to protest the state’s election law, Atlanta is back in the spotlight.
Ryan Mills

The bill passed 76-54 after failing to advance on three previous attempts.
Zachary Evans

Brittany Bernstein
Walmart says its executives have ‘found these sessions to be thought provoking and constructive.’
View More
Loading...