How Congressional Dems and the Admin Stalled Uyghur-Forced Labor Bill

Can You Say Crime-Prediction Software Is Bad without Considering Whether It Is Accurate?

Sorry, Omarova’s Soviet Birth Is Not What Sank Her Nomination

COVID-19 is not going away. Cases have spiked in such states as Texas, Florida, California, and Arizona, inviting widespread condemnation of reopening efforts. In some corners, America is being painted as a failure in the fight against the pandemic. 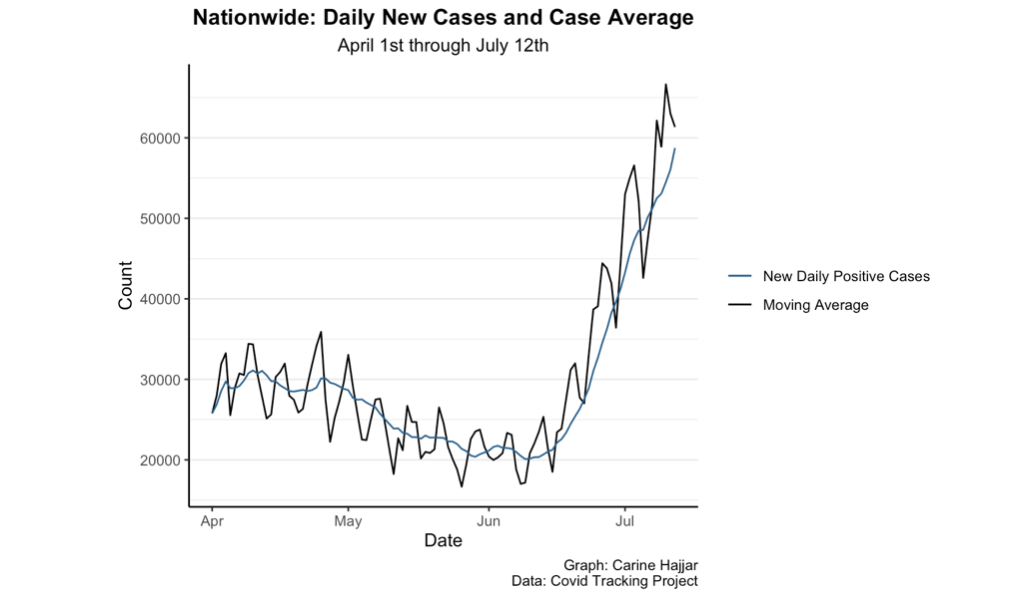 Indeed, America as a whole has experienced bleak per capita outcomes, bringing federal management of the virus into question. Yet the statistics require context. Consider the graph above, in which case numbers look ominously high. On the other hand, to date, the ratio of deaths per positive cases has fallen.

A Snapshot of the Nation 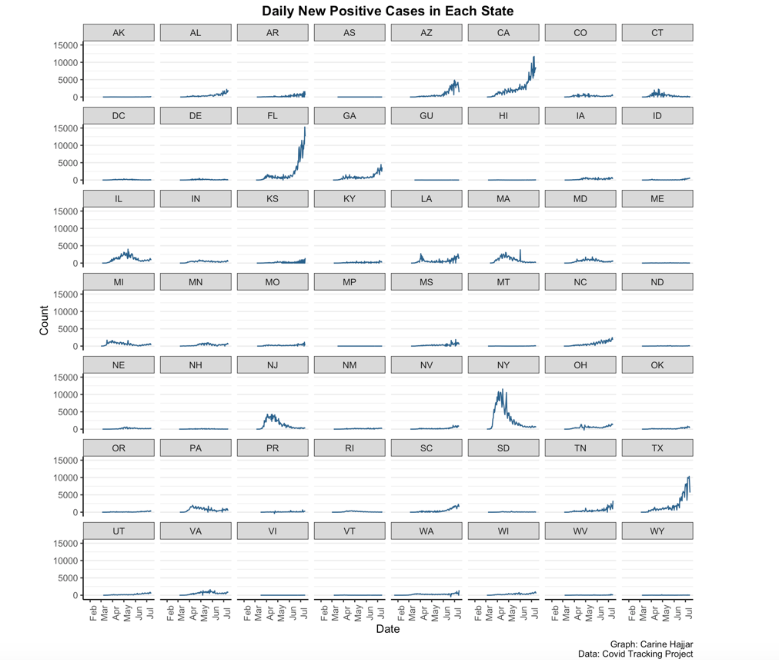 California, Florida, and Texas jump out; other states, such as Arizona, have also experienced considerable increases in caseload. Meanwhile, states that were hit hard early, such as New York, Massachusetts, and New Jersey, have already peaked and are on a steady decline. In Arizona, California, Florida, and Texas, new cases — and, to a lesser extent, deaths — are on the uptick. But other data provide some provisional room for optimism, even in states seeing large outbreaks. 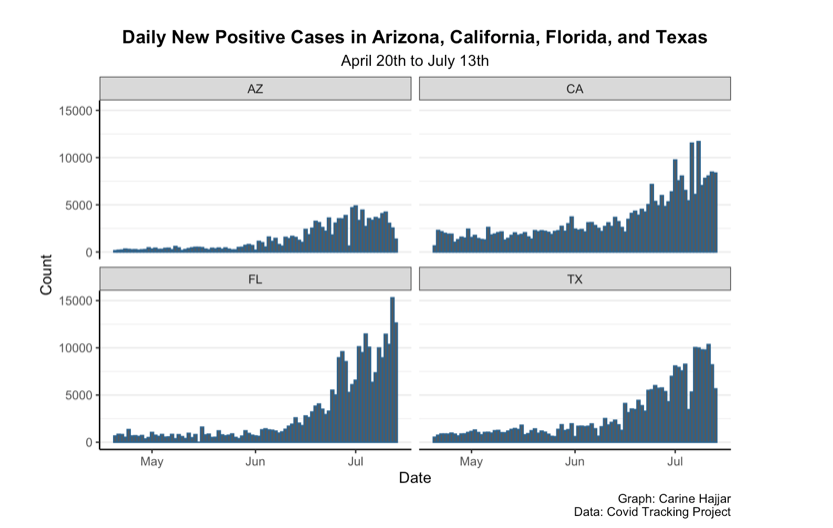 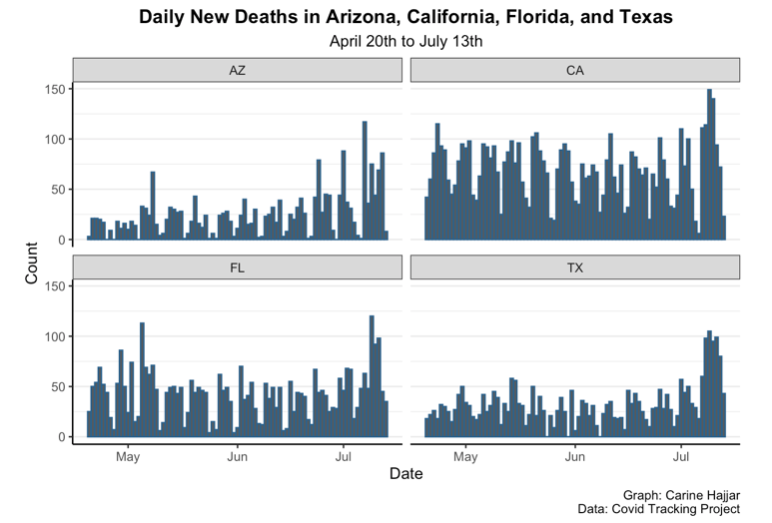 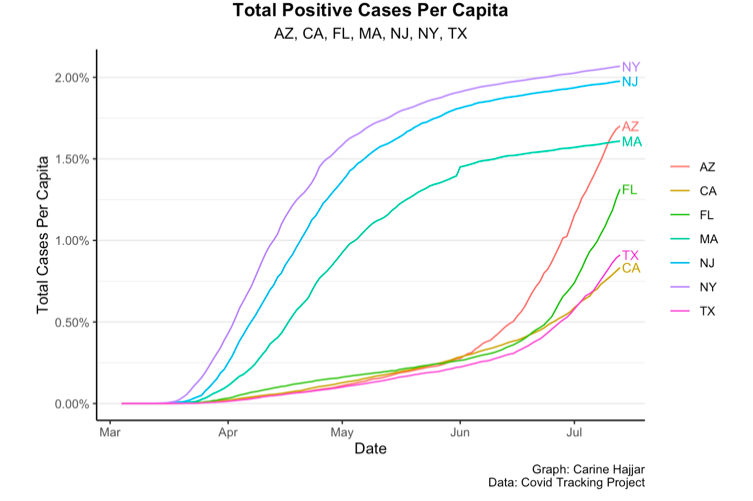 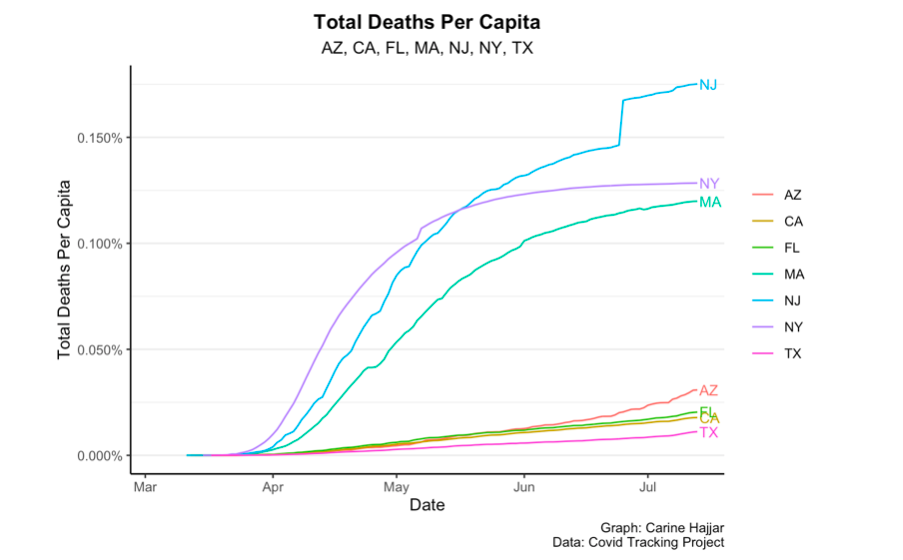 As the above graphs make clear, Arizona, California, Florida, and Texas are quickly approaching the per capita case numbers seen in New York, New Jersey, and Massachusetts. But the former group is well below the latter when it comes to deaths per capita. Lower deaths per capita in the states with relatively later peaks could reflect that the efforts in fighting COVID have improved with the advent of treatments such as remdesivir, or that the most vulnerable are being more-effectively protected, or some other mix of factors. In any case, despite the rise in cases after reopenings, deaths per capita have not spiked in the same way.

This is not a vindication of the American response. First, and most important, deaths lag cases, often by several weeks. An increase in deaths may well materialize in states currently seeing large outbreaks. Second, compared with the rest of the world, American per capita outcomes are far from desirable. Out of the current “most affected” countries as measured by Johns Hopkins University, the U.S. has the second-highest rate of deaths per capita, behind the U.K. and just ahead of Peru, Chile, and Brazil. Third, as Dr. Anthony Fauci noted, lower death rates are not necessarily enough: “There’s so many other things that are dangerous and bad about the virus.” Lower death rates may just reflect the falling mean age of the infected. Nevertheless, a significant proportion of the damage was done early on, and after missteps, the most vulnerable are being protected more effectively.

It is useful to consider cases and death in relation to each other. New and lethal outbreaks would suggest that the virus was spreading to the most vulnerable. Is that the case in these late-peak states? Not at this moment: Arizona, California, Florida, and Texas are seeing an overall decrease in the proportion of new deaths to total positive cases. 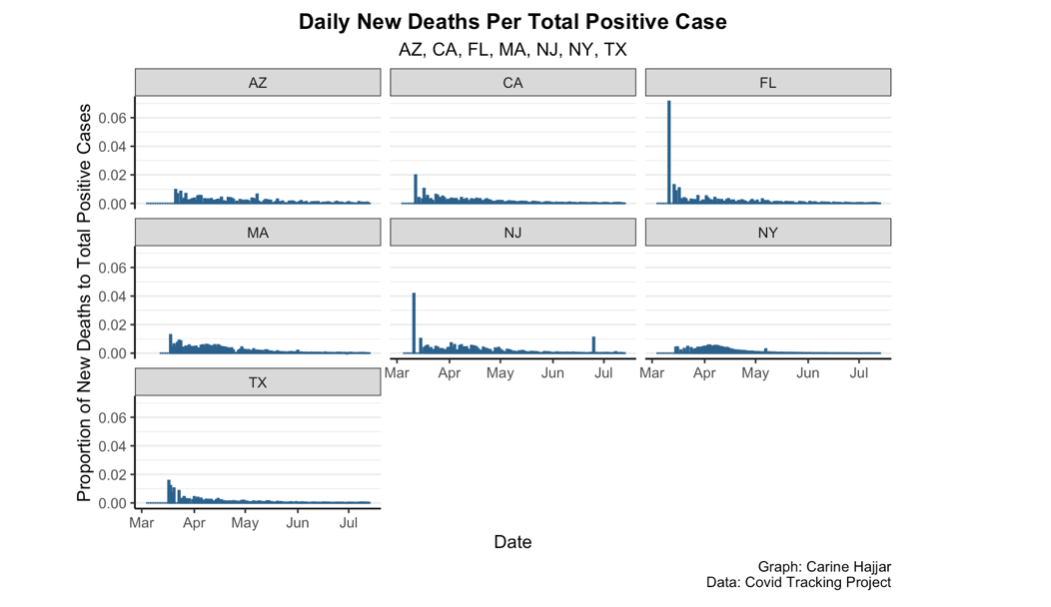 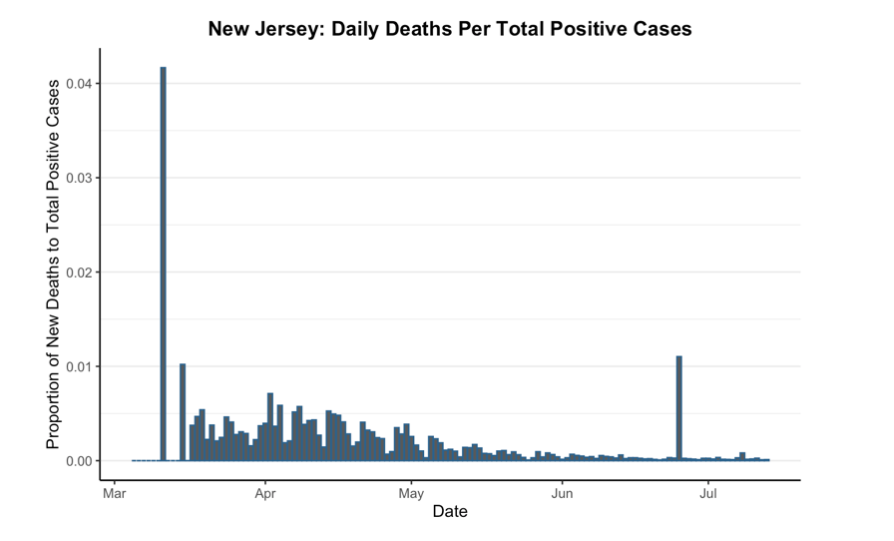 Total deaths in relation to total cases are quite high in New Jersey, Massachusetts, and New York. But most of the country is currently experiencing a decreasing percentage of total deaths per total cases. 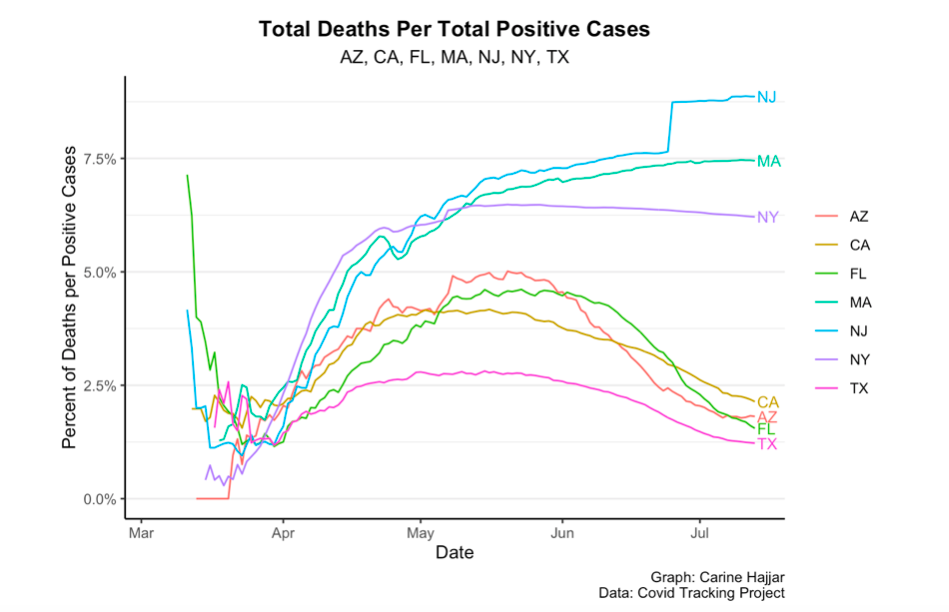 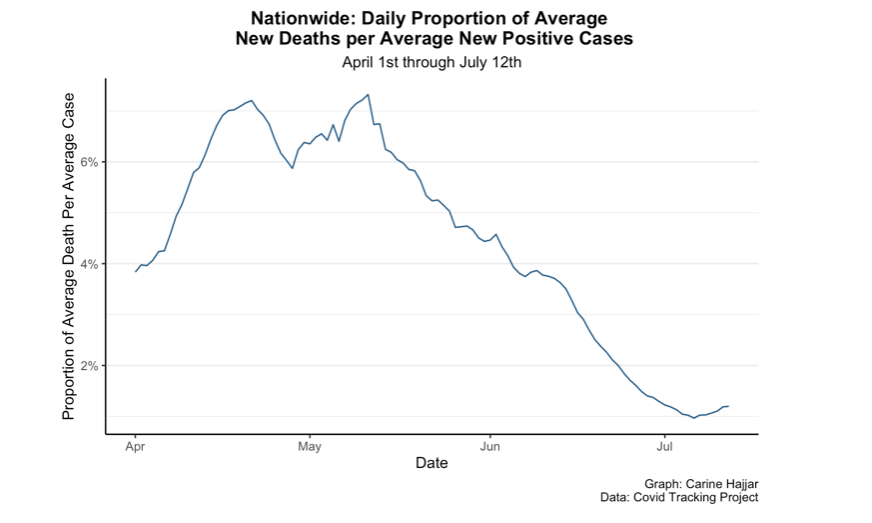 This drop in fatality among positive cases could have a variety of explanations. Testing is more widespread than it was in March and April, increasing the denominator for the case-fatalities. Perhaps the summer weather is encouraging outdoor activities, which don’t involve the close contact associated with viral spread. Maybe the healthcare industry is better equipped to handle the pandemic than it was earlier. A mixture of new techniques, treatments, and experience could be responsible for better care and lower fatalities. Finally, notwithstanding reopenings, the U.S. has been able to learn from early mistakes. The promotion of mask-wearing and social distancing, and the increased focus on nursing homes, all could make a difference for the better.

As time goes on, deaths per case have fallen. States experiencing surges in cases are far better off in terms of death per case than New Jersey, Massachusetts, and New York were during their peak rates of infection.

The country is administering a higher number of tests than ever before: 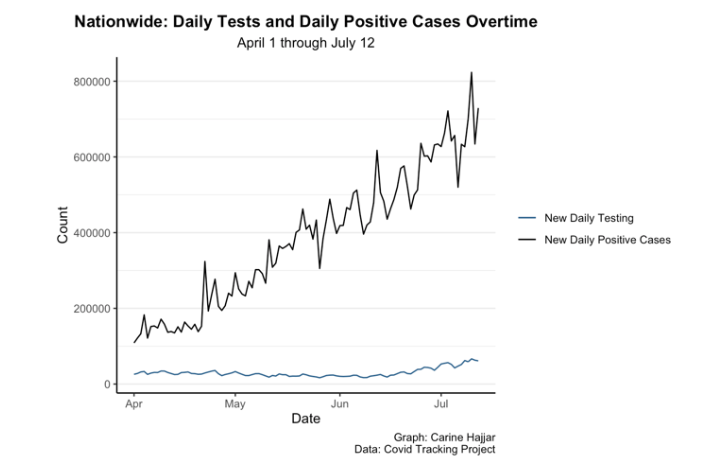 The proportion of positive cases to total tests is rising, though it does not reach previous levels. 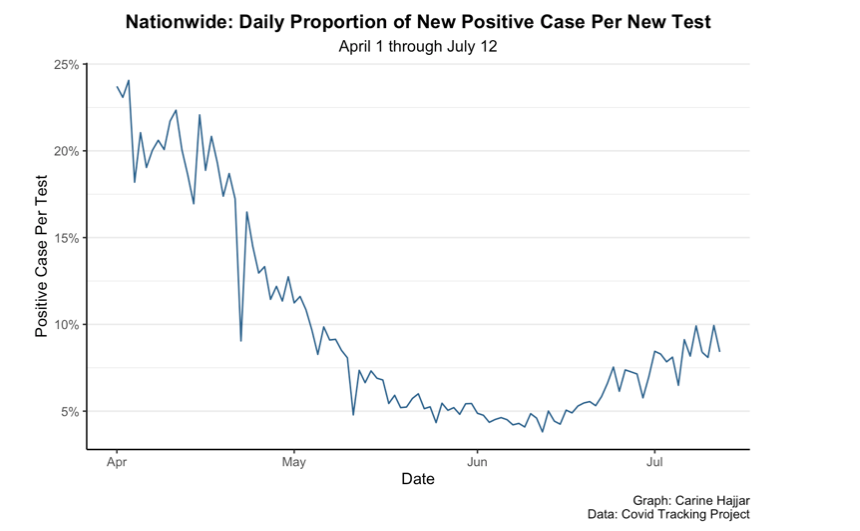 Another Way to Look at Nationwide Data 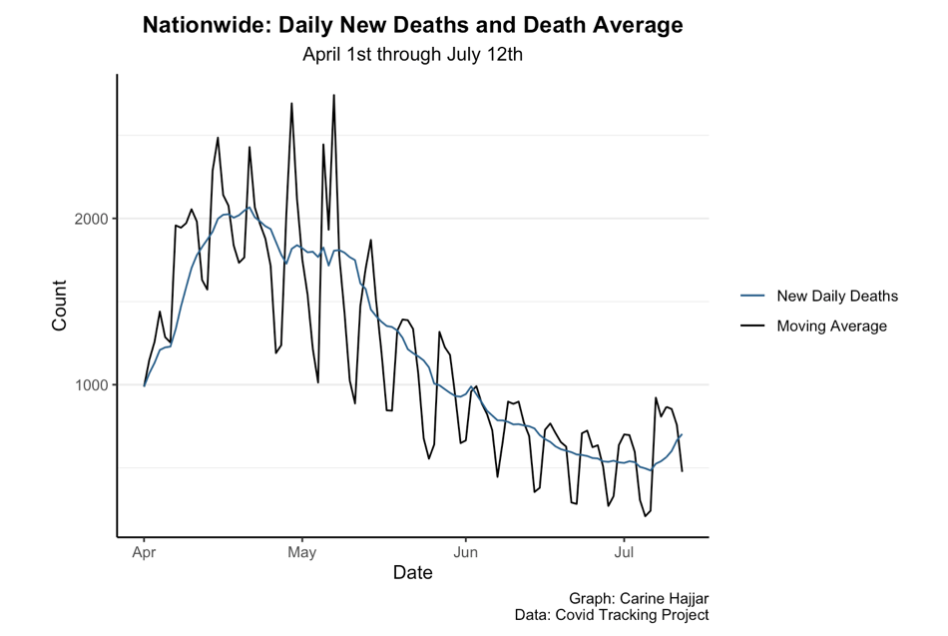 Compared with the rest of the world, the U.S. has not done well. Recent surges in cases are troubling, and there are some early signs of an uptick in deaths. But the ratio of deaths to cases is for now falling. The prevailing narrative that states with recent outbreaks are guilty of mismanagement and thoughtless reopenings becomes murkier in light of the fact that they are experiencing better per capita outcomes and far lower lethality than, say, New York and Massachusetts.

Editor’s Note: This article has been updated to clarify that, out of the countries defined as “most affected” by Johns Hopkins University, the U.S. is second in per capita COVID deaths. Worldwide, the U.S. is ninth in per capita deaths.

One group is for students to 'come together with other Bigelow students of color to process and get answers to any questions.'
Brittany Bernstein

The LA BLM leader praised Smollett for being 'courageously present, visible, and vocal in the struggle for Black freedom.'
Brittany Bernstein

Another data point suggests that overturning Roe would not ignite an overwhelming backlash against Republicans in 2022.
John McCormack

Why Did Biden Nominate Saule Omarova in the First Place?

The now-withdrawn pick for comptroller of the currency is so radical that she couldn’t make it out of a Democrat-controlled Senate. So what was Biden thinking?
Charles C. W. Cooke

Why Is the U.K. Going Mad over a Government Christmas Party?

The No. 10 gathering proves the ridiculousness of lockdowns.
Madeleine Kearns