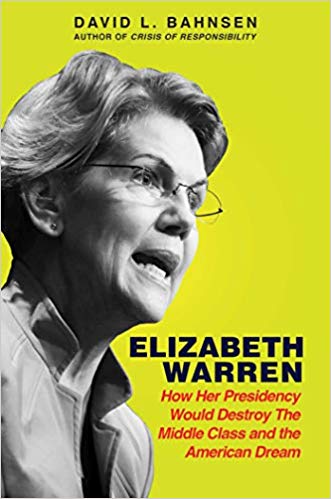 The Massachusetts lawmaker is in for it. The book, as a printed thing, won’t be available until later in January, but right now, our pal David Bahnsen’s important new assessment of a POTUS Warren — it’s titled Elizabeth Warren: How Her Presidency Would Destroy the Middle Class and the American Dream — is available in audio format: Lend an ear at Amazon, Audible, or iTunes.

Listen and you will discover a smartly written take down of what the subtitle claims: How the leftist senator’s trillions-upon-trillions agenda, if implemented, are going to sucker punch America’s middle class.

Here’s a taste of some praise about the book, from Steve Forbes: “The choices in the 2020 election couldn’t be more stark: Socialism or Capitalism. A buoyant, opportunity-rich economy. Or economic stagnation and evermore social strife. This well-written, lucid, always-interesting book convincingly makes the case for freedom over tyranny. Essential reading!”

If you thought Steve had nice things to say, get this from Andy McCarthy: “What a great political and economic anomaly: The populist Left, championed by Elizabeth Warren, is determined to vanquish wealth — the thing most essential to the investment, productivity, and growth desperately needed to underwrite the evermore ambitious progressive agenda. Here, David Bahnsen, a brilliant financial analyst with a keen political eye, provides the antidote to Senator Warren’s nostrums, and a Hazlitt-esque Capital in One Lesson for the rest of us.”

How about the author’s own words, as to why he wrote the book? From its concluding chapter (we got a sneak-peek copy), here’s a slice from David’s concise assessment of what heck a Warren presidency will hath-wrought:

Warren’s abandonment of her own good work in The Two-Income Trap is a tragedy. Her trajectory from that very interesting book to where she is now indicates that she’s an intellectually chaotic thinker, prone to developing progressively worse views over time.

Her leadership gave us the Consumer Financial Protection Bureau—an affront to the Constitution and a source of hyper-regulation of our financial sector that has served to codify “too big to fail.” It has provided just enough regulation to punish the small and midsized banks that represented no systemic risk to our country’s financial system whatsoever, while not even making a dent in the financial position of the mega banks.

Her plan to fund multi-trillion dollar social programs with an annual “wealth tax” on our richest families is delusional, doomed to fail, unconstitutional, and an egregious violation of the rights of our most prosperous job creators. The idea has been discredited around the world and represents a dangerous attack on what our economy needs more than anything else right now — growth.

Her radical environmental agenda starts with a vilification of America’s environmental record that conveniently ignores the extraordinary steps we have taken to reduce carbon emissions and the indisputable role that improved technology and processes have played in this reduction. Rather than focus on the world’s worst polluters, she sets out to destroy the American economy, America’s energy independence, and America’s geopolitical leverage by reversing a generation of progress in our capacity for oil and gas production. She dismisses the needs of the poor — who can hardly afford a huge increase in the cost of heating their home — to satisfy cosmopolitan Cape Cod liberals who do not even know what their monthly energy consumption is. She ignores the science of natural gas extraction, the economics of becoming an exporter of liquid gas, and the moral progress represented by an energy renaissance that has had overwhelming benefits for lower-income people. Her environmental agenda is economically utopian and environmentally imbecilic, and the consequences to the poor and middle class of our country would be unthinkable.

Her Medicare for All plans are dishonest, vague, and not remotely based in reality. They would bring about the largest transfer of power to the federal government in history, doing violence to the quality of care people have come to expect from their doctors in the process. She is proposing to more than double the size of government expenditures and indulging in the fantasy that further plundering of top earners will suffice to pay for it.

The book’s official publication date is January 28th, but again, the audio versions are awaiting your ears presently. You will find Elizabeth Warren: How Her Presidency Would Destroy the Middle Class and the American Dream available right now in audio format: Lend an ear at Amazon, Audible, or iTunes.