Prince Harry on the First Amendment

Why Democrats Want Justice Breyer to Retire as Soon as Possible

Well, you learn something new every day, as they say. Today’s lesson? Governor George Wallace, the segregationist who served three nonconsecutive terms as Alabama’s chief executive, was a Republican.

At least, so says MSNBC. Noting the 50-year anniversary of Wallace’s infamous “Stand in the Schoolhouse Door,” in which the governor physically blocked two black students from entering the University of Alabama in Tuscaloosa, MSNBC’s All In with Chris Hayes showed a photo of Wallace — identifiying him as “(R) Alabama.” 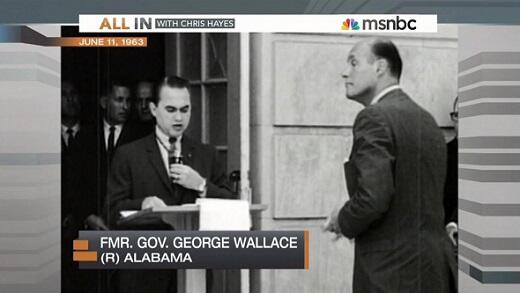 ‘It was insensitive, and I have embarrassed myself and my party by its use,’ O’Connor said.
Caroline Downey

Why the soft-drink giant is pulling back from its left-wing posturing.
Dan McLaughlin

The former dashboard manager alleges a vast data conspiracy in Florida; not a word of it is true.
Charles C. W. Cooke

Since when do we need the cops to intervene in the recreational stabbings of our youth?
Charles C. W. Cooke

The president also voiced his desire for stability and calm to be returned to Jerusalem amid the ongoing unrest between Arab and Jewish citizens.
Caroline Downey

Violence in Israel Is the Price of Biden’s Weakness

In the Middle East, he has replaced strength with weakness, moral clarity with confusion, and loyalty with betrayal.
Mike Pence

Today at the Supreme Court: Home Searches and Retroactive Rules

Here’s what happened in the two criminal-law decisions the Court handed down today.
Dan McLaughlin

Texas is opting out of the $300 weekly unemployment supplement from the Federal Pandemic Unemployment Compensation program.
Caroline Downey

The news agency has a long, shameful record of regurgitating the terror group’s lies.
David Harsanyi

Cuomo penned ‘American Crisis’ during the early stages of the pandemic as a memoir retelling of his administration’s response to the COVID crisis.
Caroline Downey

The Mask Is an Outward Sign of Inward Things

The Mask Is an Outward Sign of Inward Things

Kevin D. Williamson
This isn't a medical question anymore; it's a question of cultural allegiance.

The Rise and Fall of Bill Gates

The Rise and Fall of Bill Gates