Wyatt Earp Was a Career Criminal

‘We’re All Trying to Figure Out Who Did This’

The Solution for NFL Overtime Rules Is Obvious

It’s time to debunk another bogus claim. In looking for fraud or misconduct in an election, we sometimes assume that “where there’s smoke, there’s fire.” But that too often leads people to assume there must be fire when, on closer inspection, there is not even smoke. Disappointed Trump supporters looking to cast doubt on the legitimacy of the 2020 vote counts have spread an unfortunate profusion of viral claims since the election pointing to apparently suspicious or inexplicable patterns in the reported vote tallies. As I have previously noted here and here, however, many of these patterns have entirely rational explanations, or are framed in ways that are outright false or misleading. This is not a reason to ignore hard evidence of actual fraud or misconduct in the election. But patterns in the voting are, at most, smoke; and if there is nothing suspicious about the pattern, we should be all the more demanding of proof of fire.

How curious that, as Baris notes, “Trump won the largest non-white vote share for a Republican presidential candidate in 60 years. Biden underperformed Hillary Clinton in every major metro area around the country, save for Milwaukee, Detroit, Atlanta and Philadelphia.” Robert Barnes, the foremost election analyst, observes in these “big cities in swing states run by Democrats…the vote even exceeded the number of registered voters.” Trump’s victories in Pennsylvania, Michigan, and Wisconsin were on target until, in the middle of the night, counting was arbitrarily halted. Miraculously, several hundred thousand votes – all for Biden – were mysteriously ‘found’; Trump’s real leads subsequently vanished. (Emphasis added).

The reader is left to believe that Joe Biden did unusually well in these four particular cities compared to 2016. These cities are all in key swing states that flipped narrowly to Biden, all traditionally provide a crucial source of votes to Democrats in their states, and Detroit, Atlanta, and Philadelphia in particular have extremely long-entrenched, notoriously corrupt one-party Democratic governments (Milwaukee may be run by Democrats, but it was only a decade ago that the county executive was Scott Walker). Those three are also, although this is never quite stated out loud, cities dominated by their African-American populations, and Milwaukee is almost 40 percent black. Now, the fact that these are heavily black cities should not blind us to the well-known and well-documented flaws of their governments, but there is certainly at least a whiff of racial appeal in efforts to convince white audiences that these particular cities must have stolen the election. In some quarters, that whiff is more like a reek.

The problem, if you look at the cities themselves, is that the facts do not fit the story. I took a look across the 36 largest U.S. cities outside of California and New York where Biden beat Trump by at least 10,000 votes, as measured by county-wide vote totals (admittedly, some cities cross county lines or have suburban voters within county lines, and Maricopa County, Ariz., has two large cities in a single county). I excluded California and New York only because they are still counting votes so slowly that it is not yet possible to fairly compare their vote totals to 2016. I also excluded four cities where Trump either won or lost by a tiny margin: Colorado Springs, Fort Worth, Oklahoma City, and Tulsa. That leaves us with a comparison across the major American Democrat-voting cities. Is it true that Joe Biden underperformed Hillary Clinton in 32 out of 36, and overperformed in Milwaukee, Detroit, Atlanta, and Philadelphia? No, it is not. It is emphatically false: 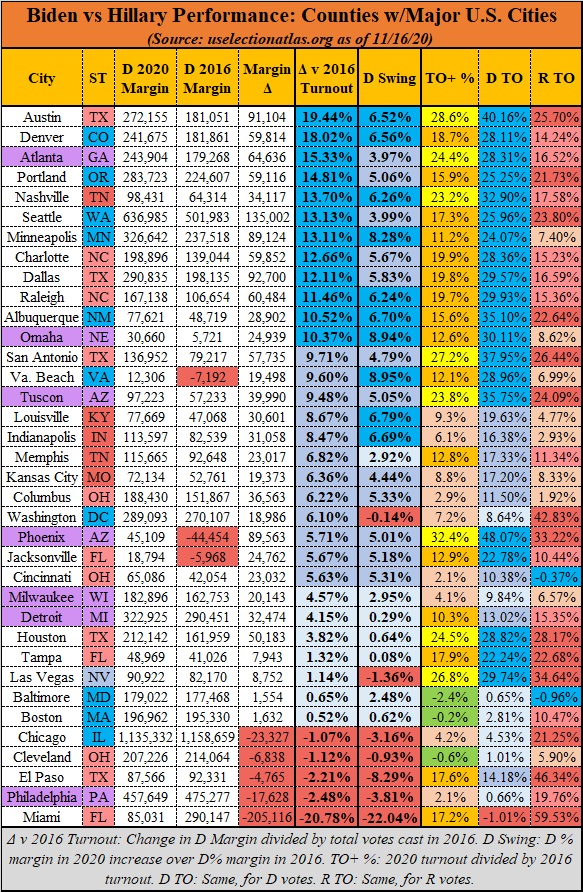 Biden improved his margin of victory compared to Hillary in 31 out of 36 urban counties — and Philadelphia was one of the five in which he didn’t. In 29 of the cities, the Democratic margin of victory grew on a percentage basis. Of the twelve cities in which Biden overperformed Hillary by enough that his margin of victory grew by 10 percent or more (as a percentage of the 2016 electorate), only one (Atlanta) was in a swing state, and one other (Omaha) in a swing district. Biden’s improvements in Milwaukee and Detroit were distinctly subpar, and in Detroit, Trump improved his own share of the vote enough to be the first Republican to break 30 percent of the vote in Wayne County, Mich., in 32 years.

Yes, Biden had some really striking “metro area” improvements over Hillary in key states, but other than Atlanta, many of those came either in the surrounding suburbs (the election was really won in the suburbs, most of all around Philadelphia) or in counties such as Maricopa County, Ariz., (which contains both Phoenix and Mesa and was won by Trump four years ago) and Douglas County, Neb.,(which contains Omaha and swung one electoral vote). But those are not counties run by infamously corrupt Democratic local parties, and “voter fraud in the suburbs” is neither as sexy nor as plausible as fraud by the kinds of urban machines that gave us 100,000 fraudulent votes in Chicago in the 1982 Illinois governor’s race. Biden turned out tons of additional votes in Austin, Denver, San Antonio, Albuquerque, Portland, and Nashville, too, but none of those mattered to the outcome.

If you are still looking for proof that Joe Biden did not legitimately win the 2020 election, nearly two weeks after Election Day, you will need to do better than this.

The judge said such a mandate must come from the state legislature.
Brittany Bernstein

A high-school student was lectured and isolated, and a mom says her fifth-grader was expelled.
Caroline Downey

The insult marks the second sharp exchange Biden has had with a reporter in recent weeks.
Brittany Bernstein

DeSantis and Trump aren’t fighting yet, but it makes sense that they are eyeing one another with concern.
Dan McLaughlin