Americans Should Be More Upset about Infrastructure Inefficiency

What You Missed Last Night

It is difficult to satirize the mindset that leads CNN and other news outlets to reflexively use this “mostly peaceful” formulation even when displaying video that plainly shows destruction and riot: 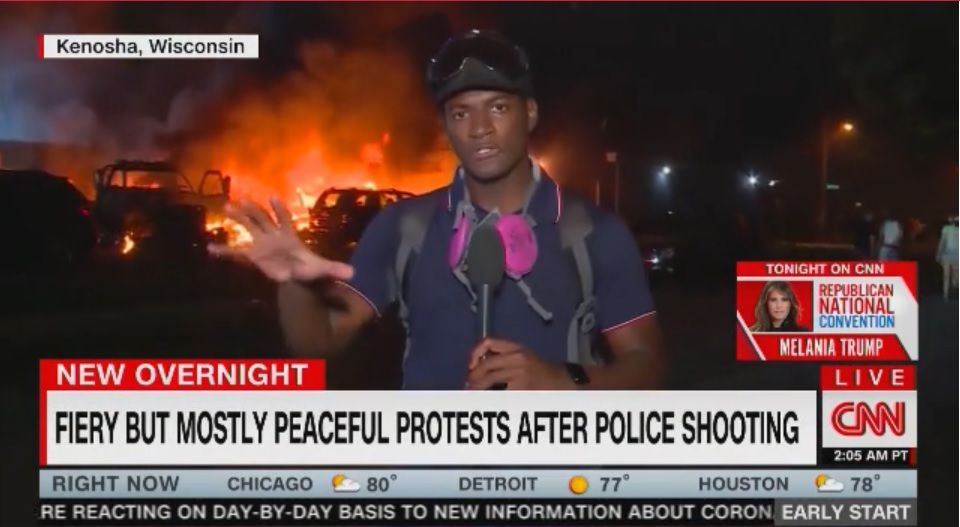 You can watch the video clip here:

For anyone doubting this is real: pic.twitter.com/3VGuGCDfAi

You can watch MSNBC’s Ali Velshi do the same thing, denying that protests are “unruly” even as fire rages right behind him on camera:

"This mostly a protest. It is not, generally speaking, unruly.

But fires have been started."

MSNBC reporter says protests in Minneapolis are not "generally speaking, unruly" as buildings burn in the background. pic.twitter.com/IzzEmKgxhM

The compulsion to describe anti-police riots and arson in this way is often matched with the argument that, after all, some peaceful protests were criticized, so what can you expect? “You told us it was bad to criticize the flag and the anthem peacefully.”

Is this framework used with forms of popular protest on the right? Of course not. Networks did not bend over backwards to describe Tea Party protests as “mostly peaceful,” but did quite the opposite, framing even peaceful forms of protest as menacingly dangerous. Example: In November 2009, a Virginia Tea Party protestor was going to burn effigies of House speaker Nancy Pelosi and Virginia congressman Tom Perriello. CNN’s Peter Hamby set the alarm, warning that “Tea Party organizer vows to burn Pelosi and Perriello in effigy,” and framing the story around Democratic outrage:

The organizer of a “Tea Party” protest in Virginia says he intends to move forward with plans to burn House Speaker Nancy Pelosi and Rep. Tom Perriello in effigy next weekend at a rally to protest Democratic health care legislation. The event is scheduled for next Saturday in Danville, which borders North Carolina and sits at the southern end of Perriello’s congressional district. Perriello, a Democrat, narrowly won his House seat in 2008 and is considered a top target of Congressional Republicans in next year’s midterm elections. When news of the rally surfaced Friday, Democratic Congressional Campaign Committee Chairman Chris Van Hollen condemned the plans as “shocking and despicable.” But Nigel Coleman, the organizer of the Tea Party, told CNN he doesn’t see what all the fuss is about. The attention, he said, should be on the Democratic plans to overhaul the health care system. “We’re not going to actually set Perriello on fire or Mrs. Pelosi on fire,” Coleman said. “But we have been trying to months to get our point across just how vehemently we are opposed to this health care legislation. For the House vote to come so close and to know that Mr. Perriello is on the other side, it’s a kick in the stomach that a lot of people couldn’t take.” Coleman said none of Perriello’s potential Republican challengers have been invited to the event, which he expects will draw about 100 people. “Something shocking and despicable is how they’ve handled this health care legislation,” Coleman said, responding to Van Hollen’s statement. “Going behind closed doors, writing a bill that is going to fundamentally change what America is. More people are going to be killed by this health care legislation than this bonfire.”

Effigies are a longstanding form of peaceful protest in America, quite unlike torching businesses, but the reaction compelled the group to back down: “Coleman said Sunday that some members of his group were ‘uneasy’ with the idea of counter-protesters and that people might mistake the TEA Party Patriots for being violent.” For good measure, that CBS report compared Coleman to Randall Terry, the notorious anti-abortion extremist. Coverage of the movement went on in that vein for years. And on occasions when right-wing extremists commit acts of violence, nobody in the mainstream media plays the “well, you criticized them when the Tea Party protested peacefully, what did you expect?” card. You could say the same about pro-life protests (ask Nick Sandmann how eager the media was to defend him and his classmates for being “mostly peaceful”).

The thing these outlets always forget is that everybody can see what you’re doing. You’re not fooling anyone.

‘There was no justification for some of the language included in this letter,’ the association's apology to its members says.
Zachary Evans

The Court declined to immediately block the law.
Brittany Bernstein

CDC Director: 'We May Need to Update our Definition of Fully Vaccinated' as Booster Eligibility Increases

'We will continue to look at this. We may need to update our definition of fully vaccinated in the future,' Walensky said.
Brittany Bernstein

John McCormack
In extensive conversations with NR, the Trump legal adviser behind the memo advising Pence to reject Biden electors claims it doesn’t reflect his own views.
View More
Loading...