The Economics of Electric Vehicles

What David Brooks Is Most Wrong About

Hillary’s MasterClass Could Be Amazing

Brian Riedl has a series of striking charts about our fiscal outlook. These estimates assume no new “stimulus money” and an economy that reopens at the beginning of the summer: 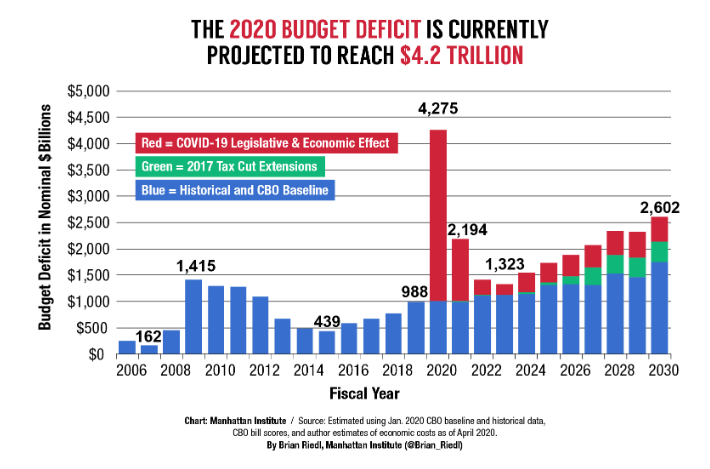 Riedl estimates a budget deficit of $4.275 trillion in 2020, and $2.19 trillion next year. This year’s deficit is estimated at 19.3 percent of GDP, which is nearly double the peak deficits of the Great Recession, and second only to the deficits during World War II. 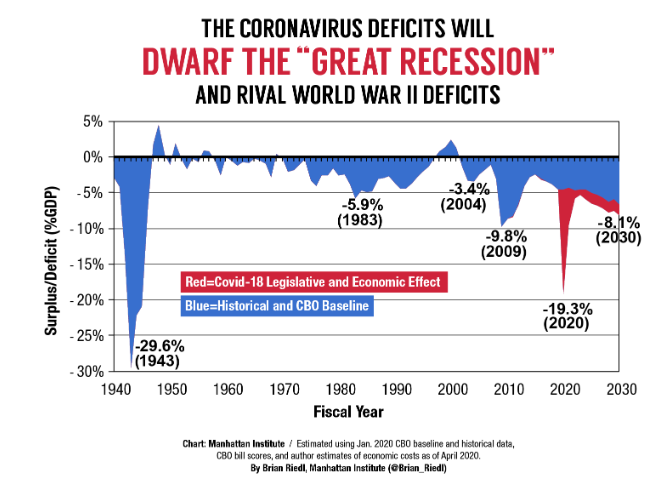 What I find most striking about these charts, apart from the scale of the COVID-19 response, is the fact that they illustrate that we were already on serious high-deficit track in spite of the strong economy for the last five years.

For all those who thinks there is nothing to worry about because interest rates are low, I would say that still translates into a massive amount of interest payments. Riedl calculates: “Borrowing $3T: When rates are 3%, this will cost $90B per year. At 4%, $120B/yr, etc. . . . Just 3 months of debt bring permanent costs to budget & taxpayers.” He adds: “The $8T *total* pandemic cost that I estimate (at even 3% rates) is $240B/yr forever squeezed from other priorities.”

These charts also show that the COVID-19 responses were mostly about throwing as much money, any money, at the problem as we could without many thoughts wasted on our fiscal health. So I guess we should all be prepared for part two of the great austerity debate when this is all over.

Once our debt-to-GDP ratio is at such a heightened level that it is adversely and significantly impacting our economic growth potential (through heightened long-term interest rates, higher tax rates, and a general constraint on counter-cyclical fiscal policies), no level of economic growth (real or fictional) will be able to get us out of this mess.

This will leave us with two options: Cut spending like there is no tomorrow, or massive tax hikes, likely in the form of new taxes. The work of Alberto Alesina and others has shown that this won’t effectively reduce our debt ratio and will hurt growth further, worsening our debt-to-GDP ratio. Not pretty.

Kyle Rittenhouse Found Not Guilty on All Charges

The district is the second largest in the U.S. and employs some 73,000 staff.
Brittany Bernstein

One group is for students to 'come together with other Bigelow students of color to process and get answers to any questions.'
Brittany Bernstein

The LA BLM leader praised Smollett for being 'courageously present, visible, and vocal in the struggle for Black freedom.'
Brittany Bernstein