Supreme Court to Hear Case on Federal Funding of Abortion

What the New Navalny Sanctions Ignore

10:57 p.m.: The attacks in Paris have ended, but police continue to search for possible accomplices, the BBC reports:

9:57 p.m.: Paris police say they believe all seven attackers have been killed.

PARIS (@AP) — Head of Paris police says all attackers are believed to be dead.

9:24 p.m.: French authorities have confirmed a death toll of 153 so far. CNN’s Jake Tapper has a breakdown of the deaths by location.

8:20 p.m.: French president Francois Hollande spoke moments ago at the Bataclan concert hall, site of more than 100 deaths, according to local authorities:

Hollande at the Bataclan tonight: "We are going to lead a war, it will be pitiless" against the terrorists. 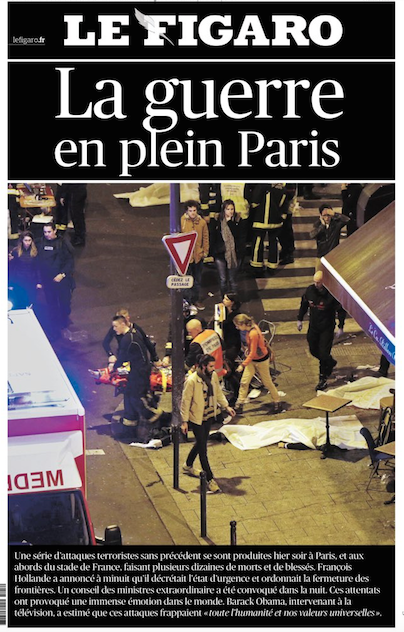 7:47 p.m.: The death toll at the Bataclan, via a Paris City Hall official:

CNN: At least 112 people were killed during the attack at the Bataclan concert venue –@jimsciutto

7:33 p.m.: France24 reporting that, according to witnesses, gunmen inside the Bataclan concert hall shouted “Allahu Akbar” before opening fire on hostages. The gunmen reportedly threw grenades as police launched an assault to free at least 60 hostages.

7:12 p.m.: An official statement from Secretary of State John Kerry:

7:09 p.m.: On CNN, a witness from the Bataclan concert hall describes the scene:

Several people were killed and seven others injured in a shooting in central Paris late Friday, according to BFMTV.

At least 26 people are dead in the attacks, Fox News reports.

Sixty people are being held hostage in the Paris Bataclan concert hall, according to Fox News. . . .

Lylia Melkonian, a reporter for France 2, told CNN there were three different sites where people were shot. CNN could not immediately confirm the number of places where shots were fired.

Police officials told the Associated Press there was an explosion in a bar near a Paris stadium.

One of the police officials told the Associated Press there was a separate explosion near the Stade de France north of Paris. It was unclear if the events were linked.

Democrats and Their Imaginary Gun ‘Loopholes’

These are almost always euphemisms used by Democrats defending laws they wish existed but do not.
David Harsanyi

‘She obviously wants to get their attention on things that are important to her state,’ the senator said.
Brittany Bernstein

‘Every business that wants to be open should be open,’ he said.
Brittany Bernstein

The network didn't have to make an exception during COVID. Its prohibition on Cuomo interviewing his brother was never consistently enforced.
Tobias Hoonhout

Republicans have expressed concern that the methods law enforcement has used to track down rioters could infringe upon personal liberty.
Brittany Bernstein

Isaac Schorr
It would be difficult to devise a targeted giveaway more likely to inspire popular outrage.

Forty Days of Biden: Not so Centrist, Not so Competent

Forty Days of Biden: Not so Centrist, Not so Competent

Jim Geraghty
Biden isn't much of a centrist, his team isn't full of wise Washington hands as they claim, and the pace to fill lower ranks of the executive branch is slow.
View More
Loading...