Whether it’s a re-elected Donald Trump or a newly elected Joe Biden, the person who takes the presidential oath of office next year will face some extraordinary governing challenges. Of course, our president doesn’t govern alone. Indeed, the Constitution puts Congress in the driver’s seat in key respects. But over many decades, we have elevated the president as at least a prioritizer in chief, and it is prioritizing that may be hardest of all just now. The difficulties of confronting a global pandemic and its aftermath while also taking on a range of long-standing predicaments that have tended to complicate each other means the president will have real trouble defining and assessing challenges, let alone taking them on.

The bizarrely vapid presidential campaign we are living through won’t make that much easier. Usually, presidents are elected after having set some goals and aims before the country. But this year, each candidate is pretty much running on the promise of not being the other. It’s a promise each can keep, at least, but it won’t offer much help in setting an agenda next year and beyond.

Meanwhile, the intense polarization that has characterized our 21st-century politics and the bitterly acrimonious culture war that has increasingly deformed our national life make it even more difficult to rise to the challenge of governing. When we think about the country’s challenges, we are all tempted to think in partisan terms—to see the other party as the foremost problem to be solved, and so to fail to see our country’s problems in their own terms.

To resist that temptation, even if only a little, the American Enterprise Institute (where I work) recently set some of its scholars a peculiar task. We asked nine of those scholars (though we easily could have called on dozens more) to offer guidance in their broad areas of expertise that the president might find useful in 2021 and beyond. But we asked them to do this while the presidential election whirls in the background, and so before we know who will win it. They therefore had to offer advice not to Donald Trump or Joe Biden but to America’s president. They had to consider not the objectives of a Republican or a Democrat but the needs of the nation.

The point of doing that is not to ignore the political and partisan dynamics of this moment in our politics; they are crucial to understanding America’s situation. Rather, the point is precisely to take full account of those but also correct for them as far as possible, to try to filter out a little of the clatter and think about those problems that will need to be taken up by whoever is elected president. Such an effort wouldn’t take up every issue under the sun, and won’t offer our president everything he needs to know and do next year, but it will take up some truly unavoidable challenges and offer some advice the president would have a hard time getting otherwise.

The resulting collection (which I edited, and to which I contributed a chapter of my own) is called Governing Priorities: Advice for America’s President for 2021 and Beyond, and it’s being published today. You can find the essays, or download the entire book, at priorities.aei.org. 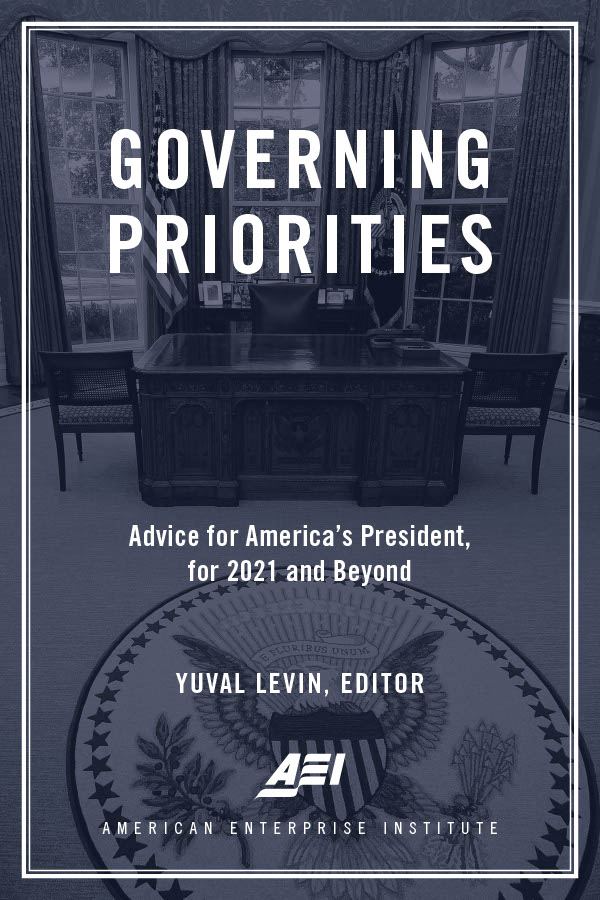 The lead essay is by Nick Eberstadt, and takes a broad view of how our country might renew itself as it emerges from the Covid-19 crisis. (Nick delivered a version of it yesterday as a powerful lecture upon receiving this year’s Irving Kristol award.) Others range from advice about the economy, taxes, and entitlements, to guidance for the president on how to approach foreign policy, help revitalize the cities, champion key political reforms, take on the regulatory state, and respond to a wave of political radicalism.

The job of the president of the United States is never easy. The burdens of responsibility laid on that office are unmatched in the world. But the potential to do good is very great. To make the most of that potential requires careful prioritization, balanced judgment, foresight, and political courage. How the executive might cultivate and deploy these in the months and years to come is the subject of this new collection. Have a look.

Jussie Smollett Takes the Stand, Claims He Was Hesitant to Report Hate Crime: 'I Am a Black Man in America'

'I am a black man in America. I do not trust police. I’m sorry, but that’s the truth,' he said.
Ryan Mills

Ryan Mills
‘I am a black man in America. I do not trust police. I’m sorry, but that’s the truth,’ he said.
View More
Loading...