Probably not the headline you want to run in the first full week of your presidential campaign:

De Blasio’s presidential quest would on the surface appear to be a bit of a curiosity given that after considerable pressing of flesh in Iowa and New Hampshire he remains at 0 percent in the polls. Where do you go with that? “If I work hard, I think I can double my support”? Also, why would he give the Post a stick with which to whomp him upside the head? Why do you keep hitting yourself, Bill? 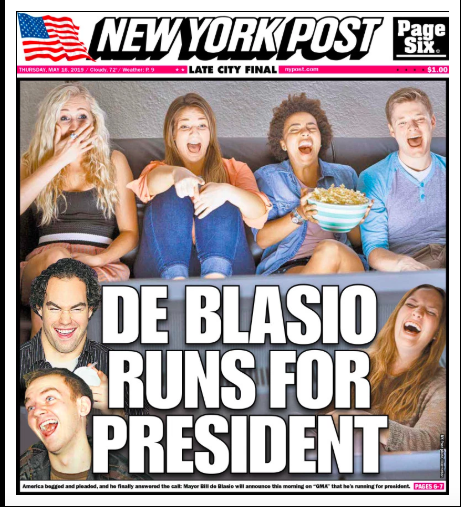 Ah, but maybe de Blasio is playing four-dimensional chess here, though. He could be pioneering an entirely new style of presidential campaigning, one based on threats instead of promises: “Elect me president or I shall unleash my tide of vermin on you, America! Laugh no more, fools, I have a rodent army at my disposal and lots of bridges and tunnels connecting to the mainland! Moooh-hoo-hoo-hoo-ha-HAW-ha!!!” (Peels off Mission: Impossible mask. Face looks pretty much the same underneath). “No more goofy, incompetent Bill de Blasio! Now buckle up for the devastating efficiency of Burgermeister Warren Wilhelm!!! Did you think I killed that groundhog by accident?”

By manipulating electoral maps to preserve their own majority, lawmakers in Springfield deprive voters of meaningful choice at the polls.
Adam Schuster