On the homepage today, I discussed the recent slowdown in immigration (legal and illegal) and mentioned that it probably helped American workers. There is no question that the number of new arrivals fell and growth slowed in the immigrant population after 2016. This falloff has been accompanied by a significant improvement in labor-force participation among native-born Americans — particularly among the less-educated. To be sure, many factors impact labor-force participation, which is the share of working-age people holding a job or looking for one. But it is clear that in last few years, the share of Americans in the labor force has improved, after declining steadily for decades.

Labor-force participation is a commonly used measure of labor-market attachment because, unlike unemployment, it does not fluctuate as much with the business cycle. This is because those who lose their jobs, but continue to look for work, remain in the labor force. A decline in labor-force participation is therefore troubling because it means more working-age people are not even seeking work. 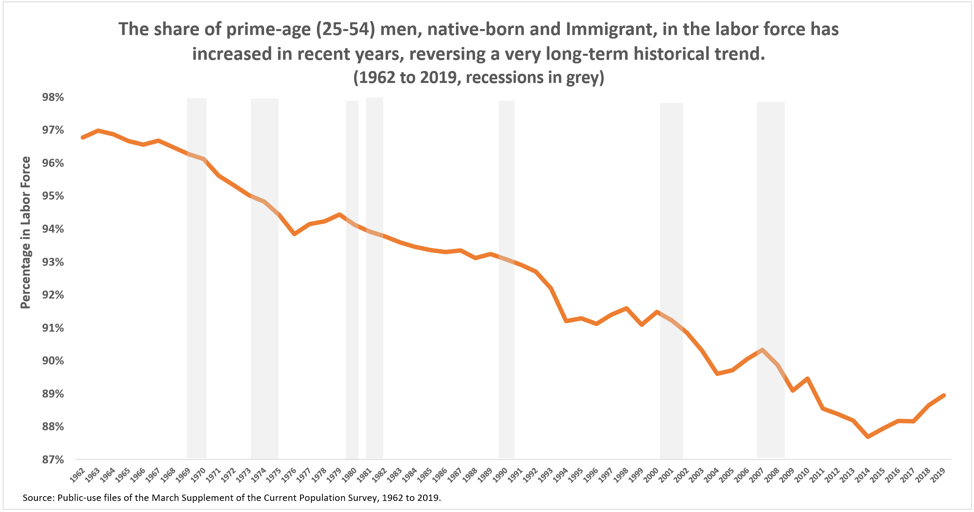 Figure 1 uses the March supplement of the Current Population Survey (CPS) going back to 1962. The figure shows that there has been a decline in labor force participation among prime-age men (25 to 54) for more than half a century. But that decline actually reversed in recent years. The focus on prime-age men is common among researchers because most people are in the labor force by age 25 and very few retire before age 55. Moreover, men typically stay in the labor force, even when they have children. The recent reversal of a trend stretching back decades is profoundly important because, as AEI’s Nicholas Eberstadt has repeatedly pointed out, there are a host of negative outcomes, for the men and society in general, associated with so many not working. 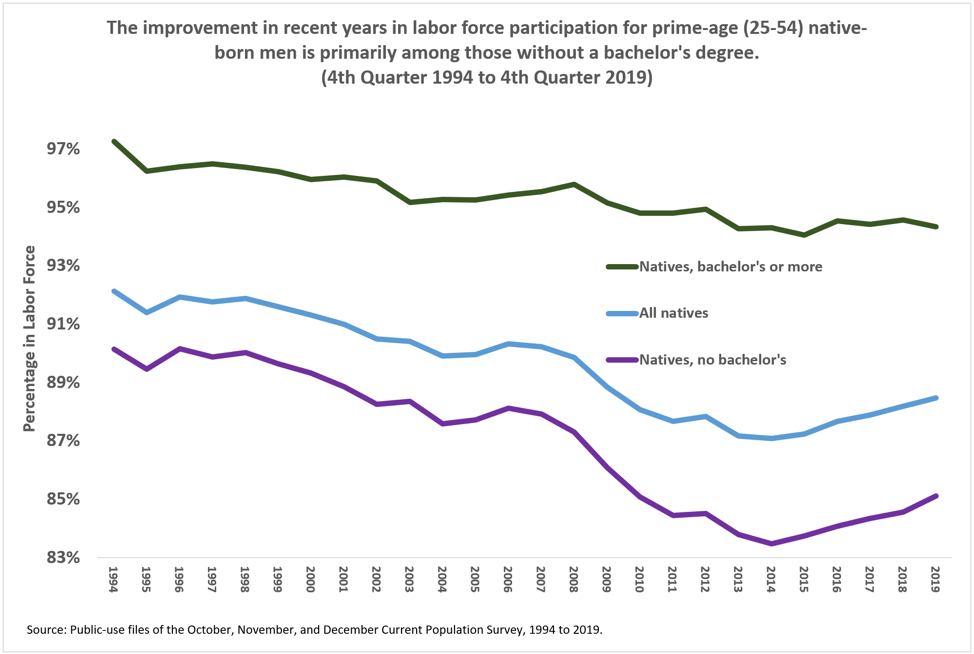 The CPS did not identify immigrants and native-born workers on a regular basis until 1994. Figure 2 shows labor-force participation among prime-age men using the monthly CPS from the fourth quarter of each year starting in 1994. By looking at the fourth quarter instead of the CPS in March, as in Figure 1, we can see labor-market trends right up until the time COVID-19 hit. Figure 2 shows that the improvement in recent years among natives is primarily among those who do not have a college education. This is certainly good news, as the decline in labor-force participation has generally been more pronounced among the less-educated.

Representative Valoree Swanson, the bill’s sponsor, said earlier this month that it would protect women and girls from unfair competition.

Fifty Years of Chinese Subversion at the U.N.

Beijing’s corruption of the organization can be seen everywhere.
Jimmy Quinn

Greene has now accrued $5,500 in fines this year for refusing to wear a mask on the House floor.
Brittany Bernstein

Smith alleged earlier this month that a boy wearing a skirt assaulted his daughter in a Loudoun school.
Zachary Evans

The Virginia Democrat is at it again — and we shouldn’t be surprised.
Dan McLaughlin