An Unhappy Shareholder, ESG, and What a Company Is For

If you have been on Republican fundraising email lists the past several years — even if, like me, you have never given a penny to Donald Trump’s campaigns — you are familiar not only with the regular deluge of such emails, but also with the ubiquity of Trump and the Trump family in the sender line, subject line, text, and merchandise offered in such emails. Trump is everywhere. Until now: Suddenly, he’s gone. After noticing this pattern, I went through my inbox (even the spam folder) and counted up the fundraising emails from official GOP sources since January 7, the day after the Capitol riot. What isn’t said speaks volumes. I categorized these by the sender or domain.

NYGOP.org: The New York Republican Party, including both press releases and more obvious fundraisers. Out of eleven emails, one mentioned Trump, and that a reference to Andrew Cuomo suing the Trump administration.

majority-gop.com: House GOP fundraising. Out of eleven emails, one mentioned Trump, two if you count one mentioning impeaching “our president” with no reference to him by name.

Stand for America PAC: Nikki Haley’s PAC. One email, not mentioning Trump even while referencing Haley sitting in the Oval Office.

DonaldJTrump.com: Zero emails, which is a significant change.

TOTAL: In just under two weeks, 201 emails, of which at most eight mentioned Trump, and a few of those only obliquely. Even emails pounding away at social-media bans talk about banning “conservatives,” not Trump himself. Jake Tapper of CNN is mentioned in more of these emails than Trump is. I also saw zero examples of Trump merchandise referenced in any of these emails. As for the use of Trump sender lines, take a look at the emails from the rnchq.com domain since the beginning of the year (I cropped this for width, but you can see the senders, subjects, and dates: 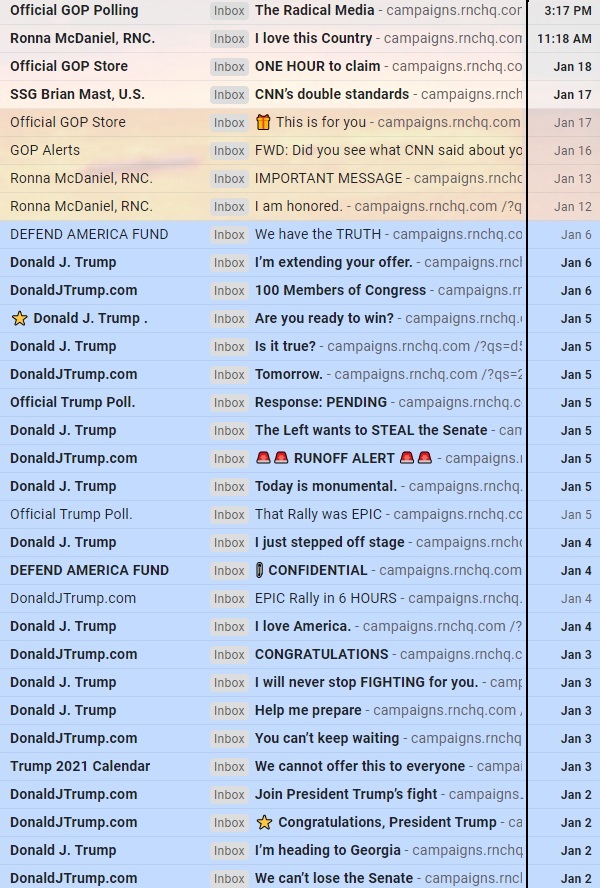 Few things are more directly aimed at the tribal id of political partisans than fundraising pitches via direct mail and email. If rank-and-file Republican donors are more likely to respond favorably than unfavorably to mentions of the president, you’d expect to see that. If my inbox is at all representative, Trump’s absence speaks volumes about what the fundraising professionals are seeing in the mood of the party.