Message from Afghanistan: ‘Good Evening Sir. No Place Is Safe’

To start with, let’s define “Midwest.” I’m interested here in the Midwest as a political rather than a cultural entity, with its heart in the five states of the old Northwest Territory between the Mississippi and Ohio Rivers: Ohio, Michigan, Indiana, Illinois, and Wisconsin. To that, I would add one of the original 13 Colonies (Pennsylvania) and two states acquired in the Louisiana Purchase (Iowa and Minnesota). These states form a traditionally cohesive political region, with the Upper Midwest trio of Minnesota, Wisconsin, and Iowa as a kind of subregion reflecting their unique demographic and cultural trends (lots of Scandinavians, exceptionally high voter turnout, long progressive traditions). They have a common regional identity in spite of some obvious distinctions: Pennsylvania has the decidedly Eastern city of Philadelphia, Indiana has more cultural ties to the South than the others, and Illinois is unusually dominated in recent times by Chicago, while Iowa is exceptionally rural. The Midwest as a cultural region could easily be defined to include both Missouri and the Great Plains states of Kansas, Nebraska, and the Dakotas, but those areas have their own distinct political histories (Missouri being politically much more Southern than the others).

Historically, the Midwest states other than Pennsylvania shared the common identity of being frontier states in the years between the Revolution and Civil War; Western Pennsylvania was the frontier during the French and Indian War, which began there. Given the origins of the Republican Party, these states were distinguished by the fact that Pennsylvania was the original home of American abolitionism, and the rest were all founded as free states out of territory where slavery was banned early by the federal government. In the century after the Civil War, they grew into the heartland of American industry, and in recent decades have struggled with the decline of heavy industry into the Rust Belt. 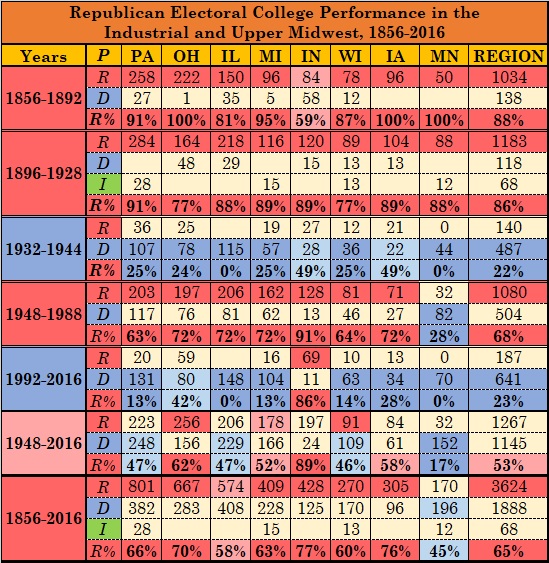 Overall, Republicans since 1856 have won a majority of the electoral vote in all of these states except Minnesota; only in Illinois have they won fewer than 60 percent of those votes. The New Deal swung the entire region overwhelmingly to Franklin D. Roosevelt, and permanently ended the Republican hammerlock on it — especially in Minnesota, which went Democrat in 1932 for the first time in its history, but has been won since then only by Eisenhower and Nixon. Since 1948, the region has divided more, with Democrats dominating Minnesota, Republicans dominating Indiana, and a closer edge for Republicans in Ohio, Iowa, and Michigan, and for Democrats in Wisconsin, Pennsylvania, and Illinois. It was once again a part of the Republican coalition from Eisenhower to Reagan, and in 1988 behind George H.W. Bush. Post-1992, however, only Indiana has been more Republican than Democrat, and only Ohio — traditionally the must-win swing state for any Republican — has been particularly close.

George W. Bush in 2000 and 2004 became the only Republican ever to win the White House without winning the Midwest; indeed, Richard Nixon in 1968 was the only other Republican to win with fewer than 60 percent of the region’s electoral votes. It has been a critical swing region: Grover Cleveland in both his wins and Woodrow Wilson in 1916 are the only Democrats to win without winning the Midwest. But it has usually swung together. Only in four elections has the region been more closely divided than a 60/40 electoral vote split: 1976 (52-48 Carter over Ford), 1948 (56-44 Truman over Dewey), 1856 (57-43 Buchanan over Frémont), and 1968 (59-41 Nixon over Humphrey). In only one of those races, 1948, was neither nominee from the Midwest.

The importance of both the Midwest and West in Republican history tends to get slighted by obsessive focus on the political history of the South, but it is reflected in the party’s choice of nominees and its election of presidents. Of the seventeen Republicans elected president (not counting Ford or Arthur, neither of whom won an election), only Trump and Calvin Coolidge never lived west of the Ohio River. Ten of the seventeen lived in the Midwest: Lincoln (Illinois), Grant (Ohio and Illinois), Hayes (Ohio), Garfield (Ohio), Benjamin Harrison (Indiana), McKinley (Ohio), Taft (Ohio), Harding (Ohio), Hoover (Iowa), and Reagan (Illinois and Iowa). Eight lived in the West, Great Plains, or Southwest: Grant (Oregon), Teddy Roosevelt (the Dakotas), Hoover (California), Eisenhower (Texas and Kansas), Nixon (California), Reagan (California), and the Bushes (Texas). Expanding the field to the party’s nominees, Trump is only the third, after Dewey in 1948 and 1944, Charles Evans Hughes in 1916, and James G. Blaine in 1884, to never live west of the Ohio: Romney (Michigan and Utah), McCain (Arizona), Dole (Kansas), Ford (Michigan), Goldwater (Arizona), Willkie (Indiana), Landon (Kansas), Frémont (California) all did.

Trump’s eastern roots did not prevent him from winning 73 percent of the Midwest’s electoral votes, the best Republican showing since 1988. That shift was prefigured, of course, during the Obama era with the political successes of Scott Walker, Pat Toomey, Mike Pence, John Kasich, Rick Snyder, Ron Johnson, Rob Portman, Mark Kirk, Tom Corbett, and others, as well as the national prominence of John Boehner and Paul Ryan as House Speakers. The mixed but generally poor performance of Republicans in the Midwest in 2018 (wins in the Iowa and Ohio governors races, but losses in Wisconsin, Michigan, and Pennsylvania) may be an ominous sign.

The Midwest has been declining as a share of the national population for decades, and it stands to lose five electoral votes (one each in Pennsylvania, Ohio, Michigan, Illinois, and Minnesota) by 2024, if current census projections hold. Its central position in Republican politics may suffer further as power shifts to the more diverse Sun Belt states of Texas, Florida, North Carolina, and Arizona. For now, however, the party will be making its stand in its historic home base.

Beijing accused the U.S. of adopting an 'outdated Cold War zero-sum mentality' after the defense partnership was announced.
Zachary Evans

In one email, a Biden business partner suggests Hunter will hold an equity stake for his father in a Chinese energy firm.
Zachary Evans

During the fall term, the fatality risk of teaching was comparable to that of driving 18 miles alone in a car.
Casey B. Mulligan