A new report from the Center for the Study of Partisanship and Ideology (CSPI) confirms a trend that has been obvious to anyone paying attention: Science has gone woke. The study analyzes the abstracts of National Science Foundation grants since 1990, finding the following:

The frequency of documents containing highly politicized terms has been increasing consistently over the last three decades. As of 2020, 30.4% of all grants had one of the following politicized terms: “equity,” “diversity,” “inclusion,” “gender,” “marginalize,” “underrepresented,” or “disparity.” This is up from 2.9% in 1990. The most politicized field is Education & Human Resources (53.8% in 2020, up from 4.3% in 1990). The least are Mathematical & Physical Sciences (22.6%, up from 0.9%) and Computer & Information Science & Engineering (24.9%, up from 1.5%), although even they are significantly more politicized than any field was in 1990.

Below is a chart of the findings. Check out the spike in “Latinx.” 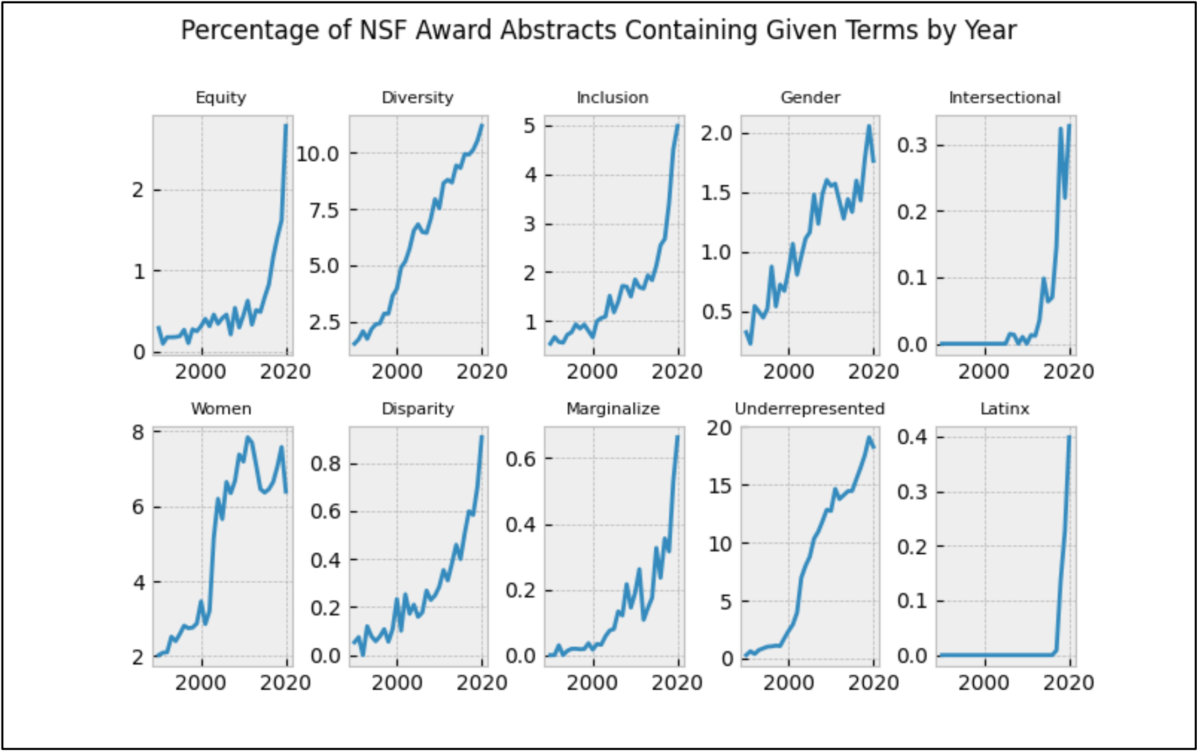 Perhaps it’s unsurprising that grant writers pledge fealty to diversity, equity, and inclusion (DEI). A recent American Enterprise Institute study finds that one in five job postings at U.S. universities requires a DEI statement from applicants. If you want to teach astrophysics, be prepared to expound on your involvement “in activities to advance or promote a diverse, equitable, and inclusive environment or institution.”

Our research-funding apparatus has long been broken. As I wrote last year:

A 2007 study found that researchers spend 42 percent of their time writing grant proposals and ensuring compliance with the conditions of the grants they receive. Stringent regulations on everything from affirmative action to animal welfare place a needless burden on scientists, reducing their productivity. Since any given proposal has a 20 percent chance of being approved, researchers devote 170 days to proposal-writing for every grant they’re awarded.

As if academics were not wasting enough time on paperwork, now they face the added burden of proving their progressive bona fides in order to win grants.

Over the past two years, we’ve learned of a number of prominent American scientists secretly taking money from the Chinese government. That is borderline treasonous, but given the state of the National Science Foundation, can you blame them?

In the case of the British Islamist who took worshippers hostage at a Texas synagogue, it’s a distinction without a difference.
Kevin D. Williamson

MI5 identified the man as a 'subject of interest' over his suspected involvement in Islamic terrorism.
Brittany Bernstein