Earlier today, while questioning Supreme Court nominee Amy Coney Barrett, Rhode Island senator Sheldon Whitehouse stumbled upon a conspiracy. Or so he would tell you. A sample of his remarks tells the story of his discovery, perhaps reached after extensive pushing of thumbtacks into a cork board and connecting them with string:

We say the stakes are high on this because you have said the stakes are high. You have said that is what you want to do. How are people going about doing it? What is the scheme here? Let me start with this one. In all cases, there is big anonymous money behind various lanes of activity. One is through the conduit of the Federalist Society. It is managed by a guy named Leonard Leo and it has taken over the selection of judicial nominees. How do we know? Because Trump has said so over and over again. His White House counsel said so. We have an anonymously funded group run by this guy named Leonard Leo. We have anonymous funders running something called the Judicial Crisis Network, which is run by [Carrie Campbell] Severino and it is doing PR and campaign ads for Republican judicial nominees . . .

He continued in this vein for a while — and not for the first time. In 2018, during the Brett Kavanaugh hearings, Whitehouse likewise excitedly detailed the tentacles of the “scheme” he claimed to uncover. He was aided in his remarks today by this chart: 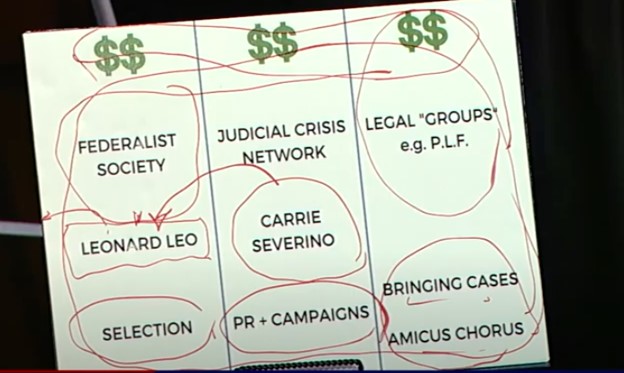 So you see now that my earlier comments about cork boards, thumbtacks, and string were not exactly uncharitable. It would be one thing, though, if Whitehouse were uncovering — or, more likely, claiming to uncover — some kind of truly twisted, nefarious operation (involving a National Review contributor, no less!), something resembling Sherlock Holmes’s description of his nemesis Moriarty’s undertakings:

He is the Napoleon of crime, Watson. He is the organizer of half that is evil and of nearly all that is undetected in this great city, He is a genius, a philosopher, an abstract thinker. He has a brain of the first order. He sits motionless, like a spider in the center of its web, but that web has a thousand radiations, and he knows well every quiver of each of them. He does little himself. He only plans.

The problem is that what Whitehouse is describing is utterly conventional. He outlines a series of individuals and organizations working within the political process to achieve a desired outcome, and doing so essentially in the open. Whitehouse himself admits this, perhaps without realizing it, when he notes that Trump has repeatedly identified Leonard Leo — far from “the organizer of half that is evil and of nearly all that is undetected” in Washington, D.C. — as an important figure in selecting judges. There is nothing wrong with that, nor is there anything particularly strange — or even secretive — about Whitehouse’s “conspiracy.”

What is unusual about it, and what is likely the true source of Whitehouse’s ire, is that it tends to be successful. Well, there is nothing stopping interested actors on the left from trying to create something comparable for their use when the balance of political power favors their doing so. It might serve them better than making arguments against Supreme Court nominees that are difficult to distinguish from memes.

The IOC Is a Craven Handmaid of Beijing