About That Chinese Bioweapon Theory . . .

The President Doesn’t Make ‘the Rules’

A Biden Cabinet Secretary Violated Federal Law. So What?

Yes! The State of the Union Address feels like a national ritual that is stuck on autopilot, lumbering along year by indistinguishable year, immune to reform or adaptation or updating, usually instantly forgotten and increasingly irrelevant… and yet unstoppable. Even the speech text is pretty much the same every year, regardless of the actual condition of the country.

National Journal’s Matt Vasilogambros points out how often the opening statement must include the cliché, “the State of our Union is strong!” (It’s become a catch phrase. The audience expects it like the bar crowd shouting “NORM!” on Cheers, or Kramer exploding into a room on “Seinfeld”.)

What’s worse, the actual state of the nation hasn’t been anywhere near strong lately, at least not since the crash of autumn 2008 and perhaps not since 9/11. The economy plods along at best, sputters and stumbles. Wages are stagnant. We had a complicated, headache-inducing health care system before Obamacare, and now it’s exponentially worse. Too many schools fail our kids. The debt grows. The world beyond our borders looks like chaos.

And yet every year, the president, and this president in particular, goes out and says, in effect, “We’re doing pretty darn good! And things are looking up! Hooray for us!” before heading to a laundry list of focus-grouped spending initiatives. The president’s party almost always wants to turn every sentence after “good evening” into an applause line, so you see lawmakers instinctively leaping out of their chairs for mundane statements. The whole thing looks like a giant self-congratulatory blowout celebration of how well our governing class has done their jobs, an opinion that is not shared by a majority of the electorate.

Yes, yes, we’re a nation of optimists and we want our leaders to be optimistic, blah blah blah. But the public is feeling pretty darn gloomy lately. 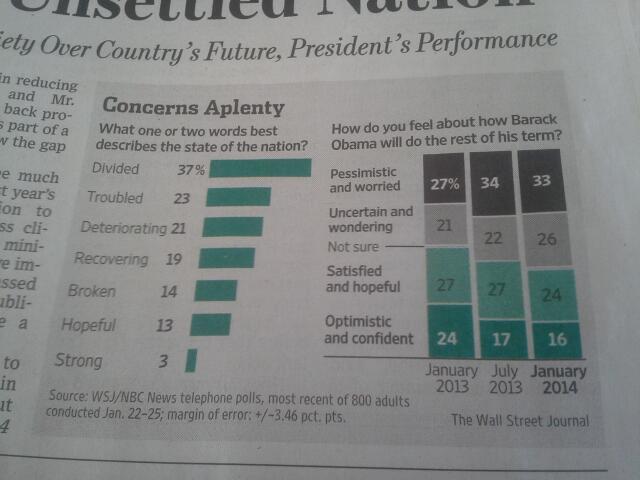 If lawmakers want us to listen to them again, they can start by leveling with us.

‘It was insensitive, and I have embarrassed myself and my party by its use,’ O’Connor said.
Caroline Downey

Why the soft-drink giant is pulling back from its left-wing posturing.
Dan McLaughlin

The former dashboard manager alleges a vast data conspiracy in Florida; not a word of it is true.
Charles C. W. Cooke

Since when do we need the cops to intervene in the recreational stabbings of our youth?
Charles C. W. Cooke

With a response to Mitch McConnell’s argument.
Jason Lee Steorts

Understaffed Retailers Are Competing against Unemployment Checks — and They're Losing

The problem is particularly bad in Massachusetts, where the unemployed take home $1,155 per week.
Ryan Mills

In Madrid, When Money-Counting Goes Artistic

A superb Marinus van Reymerswaele exhibition at the Prado looks in detail at tax collectors and moneylenders.
Brian T. Allen

Tom Stoppard, a Conservative Genius for Our Time

In his delightfully engaging plays, Stoppard refutes leftish prejudices while making you laugh instead of wince.
Kyle Smith

Why Is the Government Trying to Kill Home-Based Businesses?

Reasonable minds can disagree on Liz Cheney’s role in the GOP, but the choice of Elise Stefanik to replace her bodes poorly for more important battles ahead.
Andrew C. McCarthy

Charles C. W. Cooke
The former dashboard manager alleges a vast data conspiracy in Florida; not a word of it is true.

The Truth about U.S. Aid to Israel

The Truth about U.S. Aid to Israel

There’s No Vaccine Against the Irrational Fear of Monsters

There’s No Vaccine Against the Irrational Fear of Monsters

Charles C. W. Cooke
After months of incoherence, the federal government finally arrived at where Florida and Texas had been by March. But a new talking point soon popped up.
View More
Loading...