The COVID-19 Response Team at Imperial College London has released the results of some new simulations for the U.S. and U.K. predicting how different efforts to fight the disease might pan out. These types of exercises involve strong assumptions and will inevitably be wrong to some extent. But even with that caveat in mind, the numbers are frightening.

Basically, we can have two different goals here. The less disruptive one, “mitigation,” aims to slow the spread of the virus so that it doesn’t overwhelm our ability to treat severe cases. (This is often called “flattening the curve.”) The more aggressive approach, “suppression,” aims to squelch the outbreak entirely.

Here’s a chart showing the simulated effect of some mitigation strategies, such as isolating people who are diagnosed and closing schools. (This simulation is for Great Britain, but the situation isn’t much better in the U.S.) These measures are far better than nothing; they manage to spread out the load on hospitals’ critical-care capacity, and they could reduce deaths by half. But hospital capacity is still overwhelmed many times over. 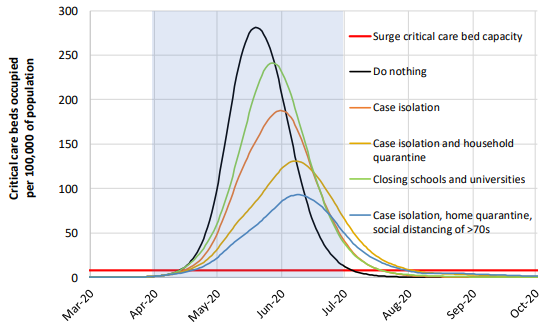 That’s not good, so what about the more forceful approaches taken in China and South Korea, which require population-wide social distancing? The good news is that this works, as we’ve seen in those places. The bad news is that it works only so long as it’s in effect, at least according to these simulations. Here’s one for the U.S. where the efforts are lifted after five months:

Importantly, though, these are not the only suppression measures that countries might try. As the report notes, “as case numbers fall, it becomes more feasible to adopt intensive testing, contact tracing and quarantine measures akin to the strategies being employed in South Korea today.” It might also be possible to tighten and relax restrictions repeatedly, or tighten them in some places but not others, as needed, which would lessen the total amount of time people spend under harsh social-distancing rules. And again, this is just a simulation that involves tons of guesswork.

But regardless, the upshot here is that we could be actively working to suppress COVID-19 at great financial and social cost — or paying the price in dead bodies for our failure to do so — until a vaccine becomes available. Oh, and that will be about 12 to 18 months.

Also worth reading: It does seem that COVID-19 responds to the weather, which is good news. And we need to start making ventilators and other key equipment as quickly as possible, to bring up that horizontal line in the above charts.

Half a century of judicial malpractice on abortion has undermined democracy.
Roger Wicker

Brad Raffensperger tells NR that the Justice Department's challenge to Georgia's voting law is based on misleading talking points, not the law itself.
Isaac Schorr

Don’t Include Women in the Draft

This change in policy would negatively affect our ability to institute a draft in a time of national crisis.
Robert M. Berg

Minnesota Sees Record Numbers of Murders, Assaults on Police in 2020

Police recorded 185 murders throughout the state in 2020, breaking the previous record of 183 set in 1995.
Zachary Evans

Tong rode a motorcycle through a Hong Kong neighborhood with a flag bearing the slogan 'Liberate Hong Kong, Revolution of Our Times.'
Zachary Evans

Ryan Mills
How a fight against a politicized curriculum led to the expulsion of two students at a prestigious Ohio private school.

Jim Geraghty
The CDC has turned on a dime. Why?
View More
Loading...