The American Founding Has Plenty to Offer Conservatism

On S.O.B.-Gate, Biden Lashing Out, and Members of the Club

With most of the votes counted, we are edging closer to having results for most of the country for 2020, with the exception of a few extremely slow-counting states such as New York and California. And even challenges to the vote totals are unlikely to move the final results much in percentage terms. Among other things, that allows us to start classifying states by where they stand going into the next national election, in 2024. There’s a twist: between now and 2022, we will have final Census results that lead to the reapportionment of the House, which changes the number of electoral votes each state has. Right now, we have only 2019 population estimates. (New York in particular may have lost more population in 2020 than one would otherwise have expected pre-pandemic). Based on the 2019 estimates, here is how the map breaks down: 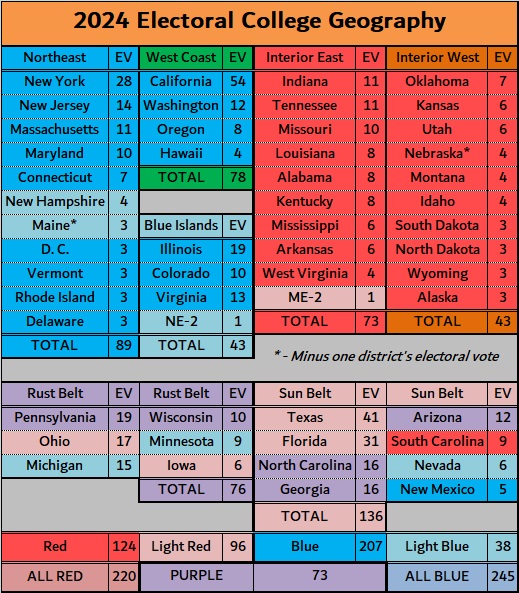 I’ve classified the states in two ways. One is by the 2020 margins. States decided by less than 2 points are in purple, as they are up for grabs again next time if the election is competitive (as most are, these days). States in the darker red or blue were decided by double-digit margins. Notice that the Democrats start with a base of safe blue states that is nearly double that of the Republican red. States that slid into this category after being closer in 2016 include Colorado, Virginia, and New Mexico. In the middle, we have states ranging from Michigan (Biden by 2.6 percent, as of the current count) to Maine (Biden by 8 percent). More than 70 percent of these electoral votes were won by Donald Trump this time around (including the big prizes of Texas, Florida, and Ohio). The second congressional districts of Maine (Trump by 6.7 percent) and Nebraska (Biden by 6.6 percent) are in this group as well, although their borders might be different in 2024, and it will not surprise me if there is a movement in Nebraska to eliminate district-based presidential voting. In between we have the purple states: North Carolina (Trump by 1.3 percent) and four states in which Biden’s current lead is below 1 percent. Those states will be the expected epicenter of the 2024 campaign. The jockeying for position will begin immediately: Georgia has two Senate runoffs on January 5, and joins Pennsylvania, Wisconsin, and Arizona in having both a Senate and a gubernatorial race in 2022.

The other breakdown is regional. I’ve divided the regions roughly, with a handful of scattered blue states labeled as “Blue Islands.” Iowa may not be, strictly speaking, a Rust Belt state (it remains agricultural), but it remains part of that region politically, for now. Perhaps if it continues its red drift for another cycle we can begin to classify it more with Nebraska, Kansas, and the Dakotas. Minnesota was one of the biggest Republican disappointments of 2020; after all the hype about continuing its shift to the right, neither the presidential nor Senate races were particularly close. The same was true of New Mexico. Nevada, by contrast, was almost as close as in 2016, although it is possible that was a temporary effect due to the pandemic’s effects on the hotel and casino unions in Las Vegas. The Sun Belt states are the fastest-growing, most important region of the country politically, although Republicans will either need to flip Nevada in 2024 (plus reclaim Arizona and Georgia) or pick off one of the Rust Belt trio of Wisconsin, Pennsylvania, and Michigan. The mighty Midwest remains crucial to the GOP.

Rice Swim Coach on Transgender Debate: ‘Compete as What You Were Biologically Born’

Seth Huston feels the sport is bowing to one person "to the detriment of thousands of other athletes potentially."
Brittany Bernstein

Two recent incidents illustrate the shamelessness of contemporary reporters. Anything goes when you’re in an imaginary fight to save democracy.
David Harsanyi

Another hearing is scheduled on the mask mandate for Friday morning.
Brittany Bernstein

He presents more risk than reward for both the prosecution and the defense.
Andrew C. McCarthy