Can the Supreme Court Keep a Secret If Roe Is Going Down?

One of the narratives you hear thrown around any time Republicans are out of the White House (which they aren’t even, yet) is that the party is somehow confined to a narrow region or slice of the electorate, is incapable of governing, relies on gerrymandered districts, etc. But when you look at how Americans elect governors, it is obvious that the party remains competitive almost everywhere in the country — indeed, in more places than Democrats. Consider: When was the last time your state elected a Republican governor? For a lot of the country, the answer is pretty recently: 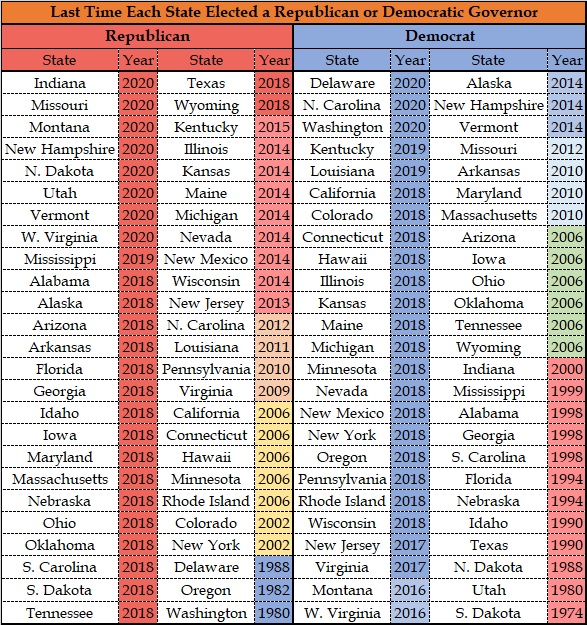 More than half of the states in the country have elected Republican governors just since 2018. Forty states have elected a Republican governor at least once since Barack Obama was elected president, 45 since 2006. Republicans have been shut out of just three states (Delaware and the two Pacific Northwest states) since 2002. Washington and Delaware have undoubtedly been helped in their long Republican droughts by electing governors in presidential years, although in 2004, Democrats won the race by 129 votes only after a protracted recount fight that remains controversial. By contrast, twelve states have been out of the Democrats’ reach since the last century, including two of the three largest states in the Union, Texas and Florida. South Dakota hasn’t elected a Democratic governor since 1974. True, a few of the really long Democratic droughts (Utah, North Dakota, Indiana) also come in states that choose their governors in presidential-election years. At almost any period of years you can pick, Republicans can say they have won governorships in more states: 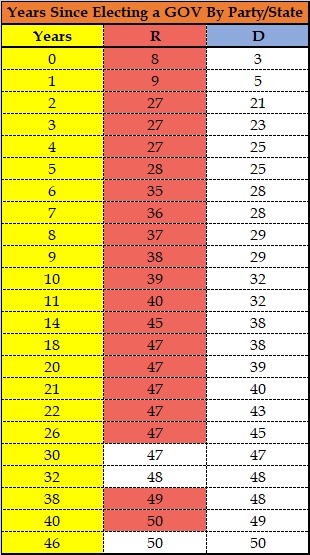 One lesson is that, for all his personal baggage, Donald Trump was a lot less damaging to his party’s brand locally than was Barack Obama. In fact, this may be in part because Trump’s unpopularity with a lot of voters was so personal to him, while Obama’s popularity was personal — it is easier for a Republican in Vermont or Massachusetts to be a not-Trump Republican than for a Democrat in Georgia or Arkansas to be a not-Obama Democrat.

The continuing popularity of Republican governors is why the party should give a hard look at running a governor for president in 2024. Republicans had great political success with governors in the past, at least two-term governors (Ronald Reagan, George W. Bush; Mitt Romney had not run for a second term). True, I said the same thing in 2016, in which there were several governors running and they all got steamrolled: Jeb Bush, Scott Walker, Bobby Jindal, Chris Christie, Rick Perry, John Kasich, even Mike Huckabee, George Pataki, and Jim Gilmore. Worse happened to the Democratic governors in 2020: Jay Inslee, John Hickenlooper, Steve Bullock, and Deval Patrick. Current or former governors who might run in 2024 include Mike Pence, Nikki Haley, Ron DeSantis, Kristi Noem, Rick Scott, and Larry Hogan. But even if some of those names may not be the best presidential candidates, and some may be better suited to run for the Senate (as Rick Scott already did, and Hogan should), the party remains very consistent in producing competitive candidates for governor nearly everywhere in America.