Bernie Sanders Torches the Idea That His $3.5 Trillion Bill Is ‘Popular’

The basic job of team defense in baseball is turning batted balls into outs. The simplest measurement of that skill is “Defensive Efficiency Rating” (“DER”), which measures the percentage of balls in play (i.e., batted balls excluding home runs) into outs instead of hits or errors. More sophisticated tools have been developed since the late 1980s to track where balls are hit and thus evaluate individual fielders, but because DER is simple (the only modest complexities are double plays and outs on the basepaths), it can be computed for every team going back to the start of the professional game in 1871. That lets us compare teams over time. In 2011, I did a two part series (here and here) to locate the best and worst defensive teams of all time, walking year-by-year to compare each team’s DER to the league average, using figures compiled by Baseball-Reference.com. In 2016, I updated that by looking at the Chicago Cubs team that went on to break the franchise’s 108-year World Championship drought. That team was, by DER relative to the league average, the second-best defensive team since 1900. Historically, the great defensive teams have been winners, and this year’s best defensive team by DER (the San Francisco Giants) is also overperforming.

Now, it’s time to update the list in the other direction: the worst defensive teams since 1900. Between 1900 and 2019, only three teams had a DER that was below 95 percent of the league average. All three teams were awful. Two were famously bad teams: 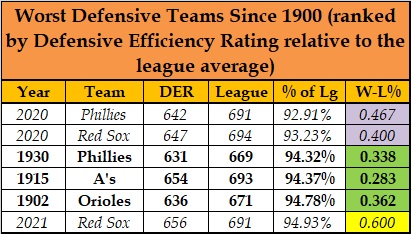 The 1930 Philadelphia Phillies went 52–102 despite finishing fourth in the National League in runs scored. Hall of Famer Chuck Klein batted .386/.436/.687 and drove in 170 runs, and Lefty O’Doul batted .383/.453/.604, but the team just gave up too many runs. The Phillies had a bad pitching staff. Fielding Independent Pitching (FIP) measures what a pitcher’s or team’s ERA should be with an average defense, based on the three things pitchers control (home runs, walks, and strikeouts). The Phillies’ FIP was 4.90, worst in the National League (the NL average was 4.28, so the league ERA of 4.97 reflects a leaguewide high average of hits from balls in play). The team’s actual ERA was 6.71, the highest of any team since 1900. Playing in the tiny Baker Bowl, with a 290-foot right field porch, didn’t help. Advanced statistical metrics used in the Wins Above Replacement formula suggest that this was a dreadful defensive team, as the team’s fielders are rated as being worth a collective -94 runs.

The 1915 Philadelphia A’s were a famously terrible team. Winners of four pennants and three World Series in five seasons from 1910–14, the A’s collapsed to 43–109 when Connie Mack sold off the stars of his “$100,000 infield” and lost his Hall of Fame pitching stars Eddie Plank and Chief Bender. This marked the first of seven straight years in last place, and ten straight losing seasons. Mack moved his star catcher Wally Schang to third base, and brought in a broken-down 40-year-old former star Nap Lajoie to play second. The American League in 1915 had a FIP of 2.96 and ERA of 2.93; the A’s league-worst 3.72 FIP ballooned to a 4.29 ERA. They were worth a collective -64 Fielding Runs. You begin to get a sense of how Philadelphia sports fans got the way they are.

The 1902 Baltimore Orioles, who went 50–88, were a failed franchise. Started the prior year as heirs to the glorious but folded Orioles of the NL in the 1890s, they suffered when manager and third baseman John McGraw jumped to the New York Giants less than halfway through the season, taking with him future Hall of Famers Roger Bresnahan and Joe McGinnity and first baseman Dan McGann. Other stars defected to the NL midstream, including Joe Kelley, Cy Seymour, and Jimmy Sheckard. The franchise was reconstituted in New York the following year, eventually becoming the Yankees; major league baseball would not return to Baltimore until 1954. The Orioles’ 3.53 FIP was not the worst in the league or far off the league average of 3.43, but they posted a 4.29 ERA and, in that era of many errors (357 for the team, the most in the AL, 78 of them by shortstop Billy Gilbert), allowed 6.06 runs per game. They were worth -110 Fielding Runs by modern metrics.

That brings us to 2020–21. In the shortened season of 2020, it was inevitable that some things would show up in the stats that might otherwise even out over a 162-game schedule, and that some players and teams would be rusty after the long layoff. There were two terrible team performances on defense: the Red Sox and the Phillies. Both had higher team ERAs than their team FIPs: 5.58 vs 5.19 for the BoSox, 5.14 vs 4.43 for the Phils, who actually had a better-than-NL-average FIP. And yet, the Fielding Runs metrics are much harsher on the Phillies (-34) than the Sawx (+6). Both teams finished badly in 2020 — 24–36 for the last-place Red Sox, 28–32 for the Phillies.

The 2021 Red Sox are struggling again at turning balls in play into outs, but unlike last year’s edition, they are winning anyway. Their 3.92 FIP is fourth-best in the AL. The team ERA of 4.11 is worse — but not nearly so bad as that of other teams in the past with such poor defenses. (For reasons unclear to me, but probably related to a league-leading 95 double plays, they yet again rate at +5 Fielding Runs). Why else would historically poor team defense matter less now? The Red Sox strike out 9.5 batters per 9 innings, and have allowed an AL-low 99 home runs. And so, their 57–38 record is the best in their division and within a half game of the best in the league.

Organized labor has shown that they can secure very high wages for dockworkers. Now, it’s time to show that they can get the job done.
The Editors

Charles Hilu
Bright Sheng has been punished for making his students feel uncomfortable and ‘unsafe.’

Kevin D. Williamson
If these are the best of times, why do they hurt so much?
View More
Loading...