Vaccines by Eating Greens? Greens Will Never Let It Happen

The CBO has an absurdly brief — four pages! — report on “The Foreign-Born Population and Its Effects on the U.S. Economy and the Federal Budget.”

There’s nothing new or surprising, but it’s always worth reminding everyone that our immigration system does not emphasize skills nearly as much as it should. Immigrants are overrepresented among those with graduate degrees, fortunately . . . but even more overrepresented among high-school dropouts. Per the CBO, 43 percent of all dropouts over the age of 25 are immigrants: 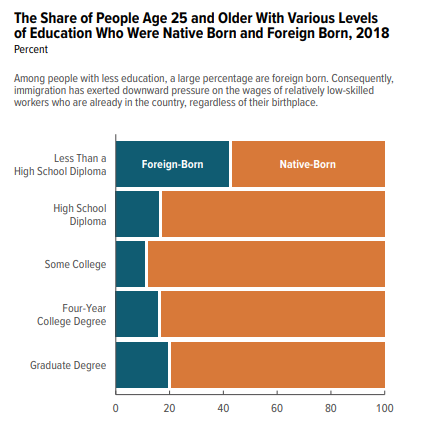 I’d add that this chart includes a lot of elderly people from generations with less schooling and less immigration. If you narrow the population to those of “prime working age,” or 25 to 54, the immigrant proportion of dropouts is a bit higher, nearly half. Only 5 percent of natives in that age range lack a degree, but 18 percent of immigrants do, so the two populations are nearly equal in size.

The Editors
A travesty of an immigration bill has been folded into an outrage of a spending bill.
View More
Loading...