When Texas governor Greg Abbott lifted the state’s mask mandate on March 2, he was simply leaving it up to individual businesses to decide whether they wanted to require masks depending on circumstances. As expressed by Beto O’Rourke, who called the GOP a “cult of death,” here was the typically temperate response of many in the Democratic Party and its media wing, otherwise known as “the media”:

They literally want to sacrifice the lives of our fellow Texans, for I don’t know, for political gain? To satisfy certain powerful interests within the state? This isn’t hyperbole. You heard our lieutenant governor, arguably one of the most powerful positions in the state of Texas, say on Fox News at the beginning of the pandemic, we are willing to die. Old people are willing to sacrifice their lives in order for the economy to reopen. . . . Unconscionable, unacceptable, we’re not accepting it. We’re moving forward on an individual and collective basis to help our fellow Texans.

Okey-doke. More than 60 days have gone by. Let’s look at the the numbers for some locations via the New York Times‘ helpful tracking tool: 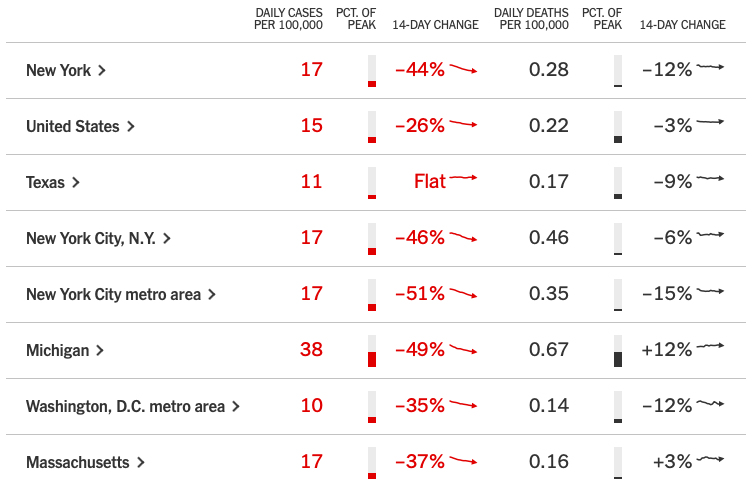 New York governor Andrew Cuomo announced with great fanfare yesterday that he is so delighted with his numbers that he is reopening the state almost back to normal levels and lifting most capacity restrictions at a point when . . . the New York City death toll is still double the nation’s, and more than double Texas’s. Will Democrats complain that Cuomo is presiding over a “cult of death” for being too hasty about reopening? New York has the second-highest unemployment rate of any state (only Hawaii is worse off), and if it has purchased a lot of additional safety with all of that economic pain, it’s hard to see.