I’m beginning to see some pushback online against claims that Virginia’s so-called “Repeal Act” is as barbaric as pro-life activists claim — or as barbaric as its own sponsor testified. In a now-viral video clip, Democrat delegate Kathy Tran confirmed that the bill would permit third-trimester abortions even when the mother “has physical signs that she’s about to give birth,” including when she’s “dilating.” In response, a number of people are passing around arguments such as this, from attorney Max Kennerly:

The Virginia bill anti-choice people are screaming about prohibits abortion in the third trimester unless (a) at a licensed hospital; (b) with a doctor certifying pregnancy is "likely" to cause harm to the mother; and, (c) life support's available and used if the fetus is viable.

Rather than rely on tweets — or even the testimony of the bill’s sponsor — let’s look at the bill text itself. Thanks to the strike-feature on the Virginia website, you can see exactly how the bill would change current law, and those changes are chilling:

The bill reduces the number of doctors required to certify the alleged medical need for an abortion from three to one, and — critically — eliminates any required showing of severity before the doctor and mother can determine that the birth would impair her physical or mental health. Under the bill’s actual text, virtually any claim of impairment would suffice to meet the act’s requirements. Anxiety? Depression? The conventional physical challenges of post-partum recovery? Any of those things could justify taking the life of a fully formed, completely viable, living infant.

If there’s any silver lining in that pitch-black cloud, it’s that the act would at least retain current law’s born-alive protections, requiring that “measures for life support for the product of such abortion or miscarriage shall be available and utilized if there is any clearly visible evidence of viability.” This language (along with generalized prohibitions against murder) render moot Governor Ralph Northam’s ominous musings that “a discussion would ensue between the physicians and the mother” even after a baby is resuscitated.

Ever since Donald Trump clinched the GOP nomination, and the vast majority of GOP office-holders fell into line behind the nominee, I’ve heard and read countless critiques of GOP cowardice. Politicians are too afraid of the base to say what they really think. They’re too petrified of influential conservative media voices to break with Trump. Much of that criticism is valid, but where is the criticism of Democratic politicians who are so afraid of their own online mob that they refuse to raise their voices even against infanticide? A Gallup poll this summer found that only 13 percent of Americans favor making third trimester abortions “generally” legal. In fact, only 18 percent of Democrats shared that position: 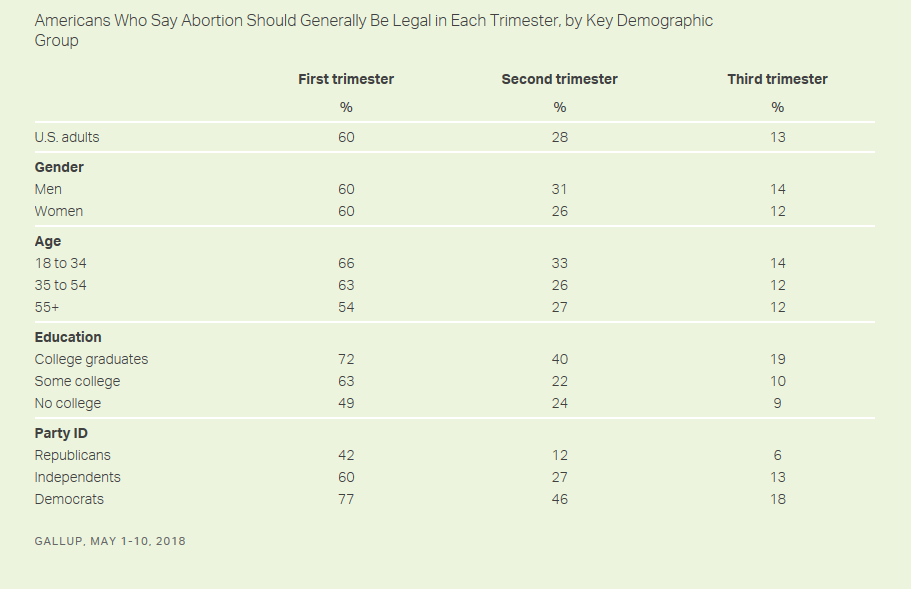 Make no mistake, this bill functionally renders third-trimester abortions generally legal. It takes nothing more than the agreement of a mother and doctor that there is any degree of even mental impairment to kill a child. Are Virginia Democratic lawmakers ready to go that far? If so, is that position a matter of conviction, or of fear?