An Exercise in Stupidity

Mask Up, New York Kids, Because Some of Your Teachers Don’t Want to Get Vaccinated

In Washington, the remainder of this year looks likely to be dominated by the impeachment of the president. House Democrats seem eager to move the process relatively quickly, perhaps voting on articles of impeachment in late November or in December, and Senate Republicans have said they will then swiftly hold a trial, even though most of them don’t now think impeachment or removal is warranted. Whatever you think about the merits, it’s hard to deny that pretty much nothing else is likely to get done in Congress.

Of course, it’s also true that fairly little has gotten done in Congress over the past few years anyway, so it won’t be all that easy to tell the difference. But the emphasis on impeachment does exacerbate one particular problem that will demand to be noticed: The twelve appropriations bills that compose the federal budget all expire on November 21, one month from now, which could be near the heart of the Democrats’ impeachment schedule. Congress needs to pass spending legislation by then or else face a shutdown.

There is no prospect of the regular appropriations process functioning to achieve that goal. Over the summer, Congress and the president did agree on the overall discretionary spending levels for the year, but at this point the Senate has not passed even one appropriations bill, while the House has passed most of the needed bills but in versions that couldn’t hope to survive in the Senate.

All this suggests that Congress will yet again package the appropriations bills into one or (more likely) a few consolidated packages. A couple of these “minibus” bills could start getting considered as soon as this week, though it’s still not clear how much can really get done by the deadline—there are only about 15 legislative days before November 21, and if House Democrats are serious about moving quickly on impeachment, it’s hard to know how many of those (especially in November) will really be available for spending bills.

Of course, that may not mean a shutdown. It might just mean that, yet again, Congress appropriates for the year to come in a mad rush without considering its options or its fiscal circumstances, bargaining much, or giving most members any real role in the process. And in the meantime, the government’s fiscal situation grows worse despite a fairly strong economy, and we are further than ever from any prospect of reforming the entitlement programs that are responsible for the bulk of the problem.

Recent data from the Congressional Budget Office illustrate the shape of that problem. On its current course, the federal government will run about a trillion dollar deficit this year—despite decent growth and low unemployment. And although CBO does not assume a major recession in its projections, it expects deficits over the coming decade to reach the levels reached at the heart of the Great Recession ten years ago. Here’s a quick snapshot of the last ten years and projections for the next ten years (this is my chart, but made from data CBO released this summer here). 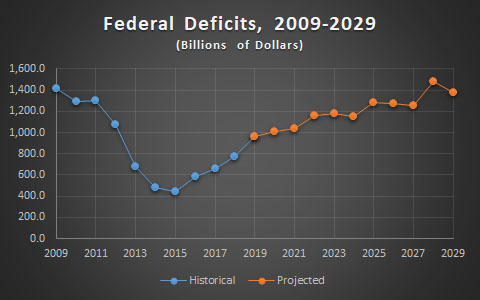 Simply put, the (modest but meaningful) deficit reduction achieved by the congresses of the Tea Party years and President Obama is being undone by today’s Congress and President Trump—and by the sheer demographic pressure of an aging society with an old-age welfare state. The result, of course, is swiftly rising debt.

Here (this time from data released with CBO’s latest long-term outlook) is how the projected debt buildup of the coming decades looks in historical perspective. 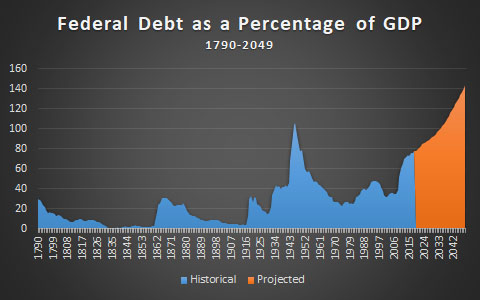 Nearly every past peak in the chart is explainable by some significant national emergency: the civil war, the first and second world wars, the Great Depression, the Great Recession. The exceptions are the bump in debt in the Reagan years (which might in part be plausibly explained by the defense buildup that helped end the cold war) and, all the more so, the enormous projected explosion of debt that we have begun to live through, and that we know will grow much worse but have decided not to address.

This is essentially entitlement-driven debt, and there are ways of at least mitigating its growth to reduce the risks involved and the costs to the economic prospects of the rising generation without endangering vulnerable and elderly people now or later. For a sense of these ideas, see for instance proposals from my AEI colleagues Jim Capretta and Andrew Biggs, regarding Medicare and Social Security, respectively.

But to say that the will for such reforms is absent would be a gross understatement. Republicans have read the politics of the Trump era to suggest they should no longer even pretend to care about this problem (and as ever, they seem unaware that the left’s caricatures of what would be involved in addressing it are false). And the Democrats are going even further, promising to expand the reach and scope of the entitlements responsible for these projections.

The prospect we face likely is not a matter of existential disaster or some kind of fiscal implosion. We can probably live with debt like this, but it will mean that our economy has less to offer our people and that we are much weaker and more vulnerable than we have to be. Doing something about it would require modest reforms, reached as compromises. But that’s just what we can’t do now. And so instead we find cowardly silence on the right and careless, nonsensical promises on the left.

U.S. border agents reportedly encountered an average of 6,779 migrants a day during the first 29 days of July.
Brittany Bernstein

The order allows border agents to expel migrants and asylum-seekers without a court hearing over concerns of coronavirus spread.
Zachary Evans

Police officers and firefighters are at a higher risk for depression, post-traumatic stress disorder, and suicide than any other profession, researchers say.
Brittany Bernstein

Banding together to buy faddish stocks can be risky business.
Sean-Michael Pigeon

Who’d have thunk it?
Dan McLaughlin

Jimmy Quinn
A report by congressional Republicans raises questions about the role played by EcoHealth Alliance’s Peter Daszak in the early stages of the COVID pandemic.