With newspaper circulation continuing to fall dramatically throughout the world, Britain’s best-selling daily, The Sun, has come up with a novel way to try and attract readers: It is to experiment with a 3D edition.
The initially one-off title will be published on June 5 with the expectation that advertisers will have to pay a significant premium if they want color ads in 3D.
The edition is to appear shortly before the start of the eagerly-awaited soccer World Cup, the world’s most popular event, which takes place once every four years. (One of this year’s opening matches pits the U.S. against England.)
The special edition of The Sun, which is owned by Rupert Murdoch, will include a World Cup Fixtures Wall Chart in 3D, as well as the paper’s famous topless Page 3 girls.
The paper said it will increase its print run by hundreds of thousands of copies on June 5, and Sun readers will receive a pair of 3D glasses with the paper that day.
Matches at the 2010 World Cup in South Africa will be filmed in 3D for the first time, using special 3D cameras. 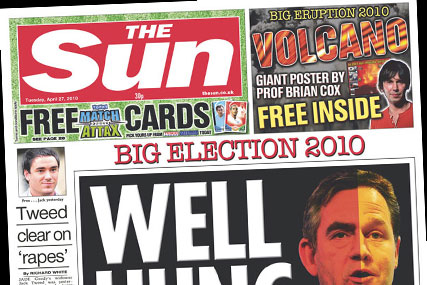 Democrats Are Laying a Trap with Trump’s Impeachment Trial

Beware: Those arguing the Dems are making a miscalculation have got it all wrong.
Andrew C. McCarthy

The Icons of the Left Collapse

In the last 24 hours, three icons fell from their high pedestals and landed with a hard ‘thud.’
Jim Geraghty

Though the organization claims otherwise, it is the nation’s largest abortion provider.
Alexandra DeSanctis

His posthumous critics exhibit all the flaws that he avoided.
Conrad Black

Earlier in the hearing on Wednesday, Becerra claimed that he "never sued any nuns" during his tenure as attorney general.
Zachary Evans

Becerra Commits to Collecting Health Data by Race: 'It's Time'

President Biden's nominee for Secretary of Health and Human Services did not identify any restrictions during a Senate confirmation hearing.
Zachary Evans

Frederick M. Hess
Jodi Shaw’s resignation reveals how campus illiberalism can be beaten — and why it’s so difficult to overcome in the first place.