President Obama vs. the rest of the world in greeting the Emperor of Japan.

More evidence that the president really understands foreign policy and has the top advisors helping him.

At least we now know it wasn’t only Saudi despot King Abdullah to whom Obama bows down.

(A little photo fun courtesy of our friends at HotAirPundit.blogspot.com.)

The King of Morocco:

The Prime Minister of Slovenia:

The President of South Korea:

The President of Kazakhstan: 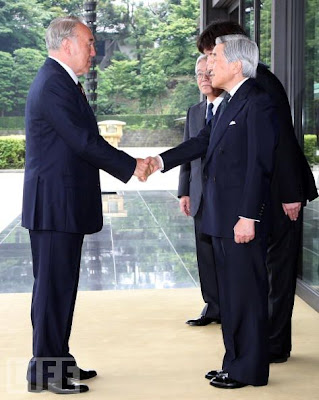 The Prime Minister of India:

And then yesterday, President Obama…

More here on “Obama’s botched bow” from Thomas Lifson, who has lived in Japan and taught East Asian Studies at Harvard, and counseled many hundreds of American, European, and Middle Eastern executives on how to work and negotiate with the Japanese.
Obama, he says, should not only not have bowed, but in doing so the president violated the fundamental precept of Japanese bowing: No touching while bowing under any circumstances.

The woke revolution in the classroom is about to go federal.
Stanley Kurtz

If Boehner thought Republicans needed to compromise with Barack Obama, he sure left voters with a different impression.
Philip Klein

'If the officer hadn’t done what he did, I think we’d have two girls dead,' the neighbor said.
Zachary Evans

'We’re certainly going to try to do everything we can from distant locations to assist the Afghans,' General Frank McKenzie also said.
Zachary Evans

Joe Biden’s nominee for NASA head has a worrying tendency to think about spaceflight’s past, not its future.
Will Rinehart

Victor Davis Hanson
In the last few months, all of the centuries-old reasons to be confident in American strength and resiliency have been put into doubt.

Charles C. W. Cooke
Since when do we need the cops to intervene in the recreational stabbings of our youth?