Nikole Hannah-Jones, lead writer of the 1619 Project, apologized for promoting the online conspiracy theory that “government agents” are setting off fireworks in Brooklyn and Queens “to disorient and destabilize the #BlackLivesMatter movement.”

“I should not have retweeted that tweet thread. I was curious about what other people thought of it as I have seen lots of comments on the unusual nature of fireworks this year, but I did not make that clear,” Hannah-Jones told National Review in an email. “That was an irresponsible use of my platform and beneath my own standards, which is why I deleted my Tweet.”

In the since-deleted tweet, Hannah-Jones urged her followers to “read this” — a statement which she now acknowledges read “as if I was endorsing the theory.” Last month, she won the Pulitzer Prize for her lead essay in the Times’s 1619 project, despite criticisms from prominent historians. 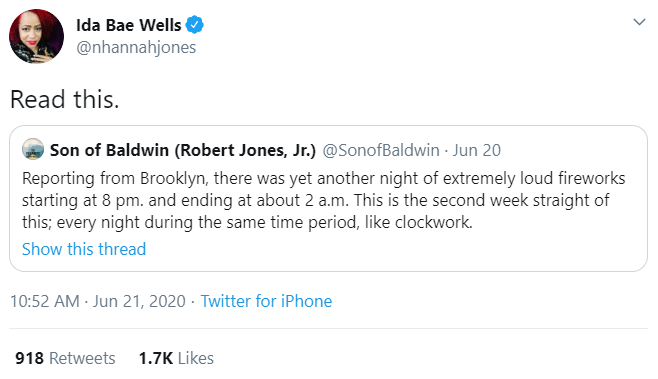 The apparent endorsement appeared above a viral thread composed by Brooklyn author Robert Jones Jr., who claimed that the noticeable uptick in firework shows in Brooklyn and Queens were part of “a coordinated attack on Black and Brown communities by government forces.”

“There is NO WAY IN THE WORLD that young Black and Brown people would otherwise have access to these PROFESSIONAL fireworks,” Jones Jr. said. “These are Macy’s July 4th/New Year’s-level displays and sonic booms reserved generally for the wealthiest people and institutions.”

Explaining his rationale, Jones Jr. said that the situation marked “the first wave before whatever the next stage of the attack is.”

“This could also be the police attempting to retaliate against our calls to defund/abolish the police by creating the circumstances for a continuous public nuisance and then purposely failing to respond to it,” he hypothesized.

The NYPD did not return a request for comment. In a story on the fireworks surge last week, the Times reported that an officer who answered the phone at the 32nd Precinct in Harlem revealed the police “were being inundated with complaints” about fireworks.

Jones Jr. also tweeted a side-by-side photo comparison of firefighters and an unknown man in a black t-shirt and yellow backpack selling fireworks and alcohol, asking if “the gear in these photos look similar.”

Fam–does the gear in these photos look similar to you? pic.twitter.com/cuQBiHUBpn

While the New York Post reported last week that FDNY firefighters in Brooklyn were setting off fireworks — an incident captured on video that the FDNY is currently investigating — there is no evidence to support the claim that authorities are behind the widespread use of fireworks.

New York City’s 311 call system recorded 1,737 complaints about fireworks during the first half of June, compared to only 21 in the same period last year, while May saw a 920 percent year-over-year increase in complaints.

American Pyrotechnics Association executive director Julie Heckman told Slate that, despite the coronavirus pandemic and mass cancellations of Fourth of July shows, the industry was expecting “a banner year” in sales. Retailers have started to get creative to boost business, including the implementation of online sales — a new feature that was unavailable in past years — he explained.

We’re experiencing a tale of two cities,” Heckman added in an interview with Time. “The display side is on life support, but it’s been quite surprising to see this early activity on the retail side.”

Steve Pelkey, owner and CEO of Atlas Fireworks, a family-owned New England company, revealed that since he began selling fireworks online during the pandemic, he is up 28 percent compared to 2019, with online retail accounting for nearly one-quarter of Atlas’ gross revenue this year.

“Usually there’s one week before July 4th where it’s like a mad rush, but that level of activity is happening now.” Anthony LoBianco, who runs Intergalactic Fireworks in Pennsylvania, explained. “Everyone is buying radically: they’re bored, and they have nothing to do at night. Fireworks fill in that little void instead of sitting at home and watching TV.”