Recently-resurfaced audio from a speech that Mike Bloomberg gave about his law enforcement strategy as New York City mayor reveals that his support for the controversial “stop-and-frisk” program, which he has since disavowed due to it’s impact on minority communities, continued until as recently as 2015.

In an audio recording of his 2015 speech at the Aspen Institute, which was obtained by Fox News, Bloomberg can be heard saying that while it may be “controversial,” the way to stop murders is to seize guns from young minority males.

“You can just take the description, Xerox it, and pass it out to all of the cops. They are male, minorities, 15 to 25. That’s true in New York, it’s true in virtually every city in America,” Bloomberg said.

President Trump responded to the news by retweeting a clip of the audio and claiming that “BLOOMBERG IS A TOTAL RACIST!” — only to quickly delete it. 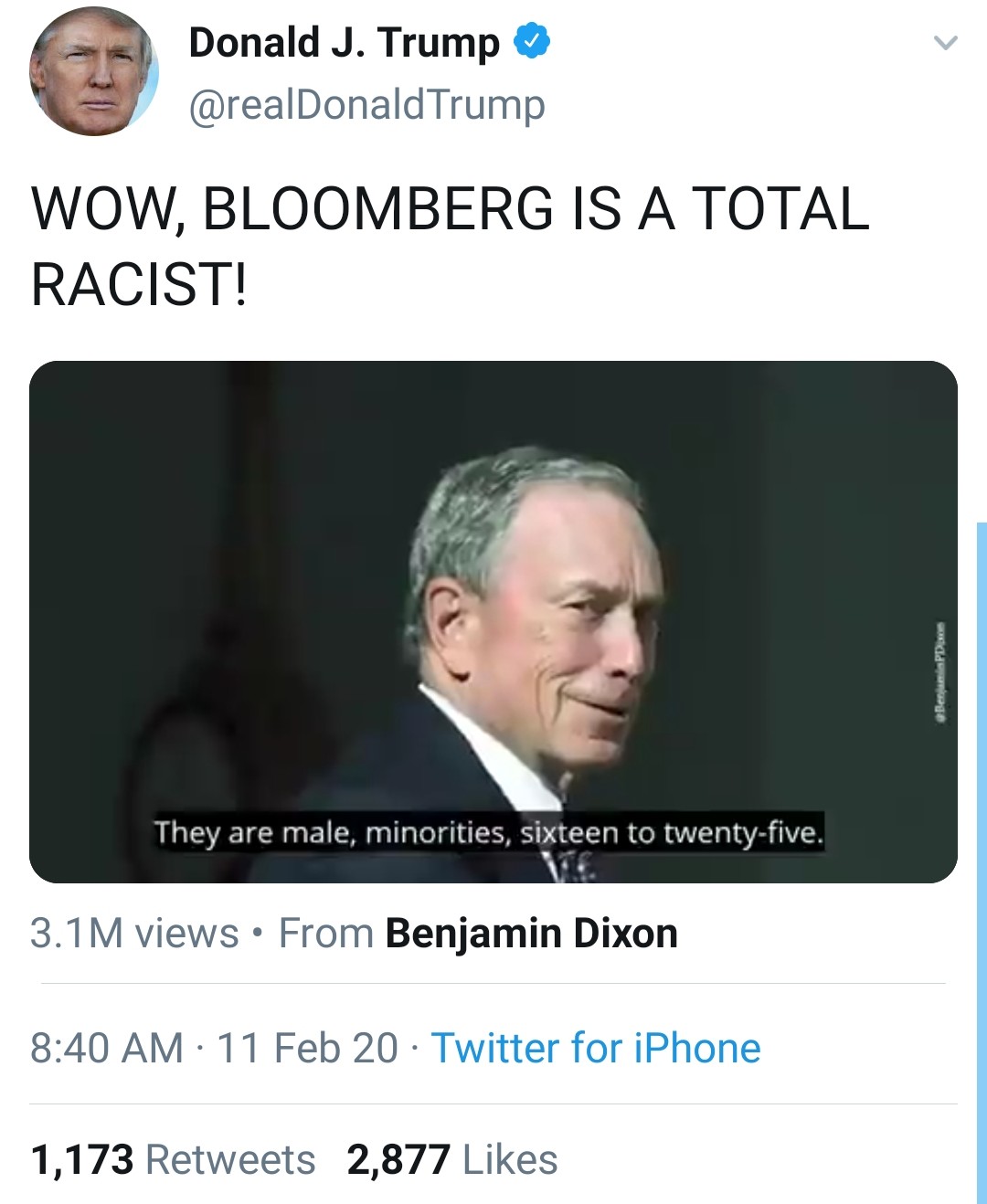 Bloomberg is notorious for his “stop and frisk” policy which the NYPD adopted during his time as mayor. In November, Bloomberg apologized for the “overzealous” policy, saying “nobody asked me about it until I started running for president.”

The president has been an outspoken supporter of stop and frisk in the past.

Stop and frisk works. Instead of criticizing @NY_POLICE Chief Ray Kelly, New Yorkers should be thanking him for keeping NY safe.

But in his 2015 speech, the former mayor argued that a heavy police presence in minority neighborhoods was necessary to curb violent crime, and suggested that higher minority arrest rates for minor crimes like marijuana possession was an acceptable consequence of that effective strategy.

“So one of the unintended consequences is people say, ‘Oh my God, you are arresting kids for marijuana that are all minorities.’ Yes, that’s true. Why? Because we put all the cops in minority neighborhoods,” Bloomberg is heard saying on the 2015 recording. “Yes, that’s true. Why do we do it? Because that’s where all the crime is. And the way you get the guns out of the kids’ hands is to throw them up against the wall and frisk them… And then they start… ‘Oh I don’t want to get caught.’ So they don’t bring the gun. They still have a gun, but they leave it at home.”

A new national poll conducted by Quinnipiac University and released Monday showed that Bloomberg had gained 14 points among African Americans in a single month, while former vice president Joe Biden dropped over 20 points after a poor performance in Iowa.