Apoorva Mandavilli, a reporter “mainly” covering COVID-19 for the New York Times, believes the lab-leak origin theory for the virus to be by its very nature bigoted.

While some quickly dismissed its plausibility when it was first floated by Republicans, including President Donald Trump and Senator Tom Cotton, the lab-leak theory has gained momentum in recent weeks as a number of scientists have emerged to say that it is quite possibly how the disease first emerged in humans.

“Someday we will stop talking about the lab leak theory and maybe even admit its racist roots. But alas, that day is not today,” she wrote. 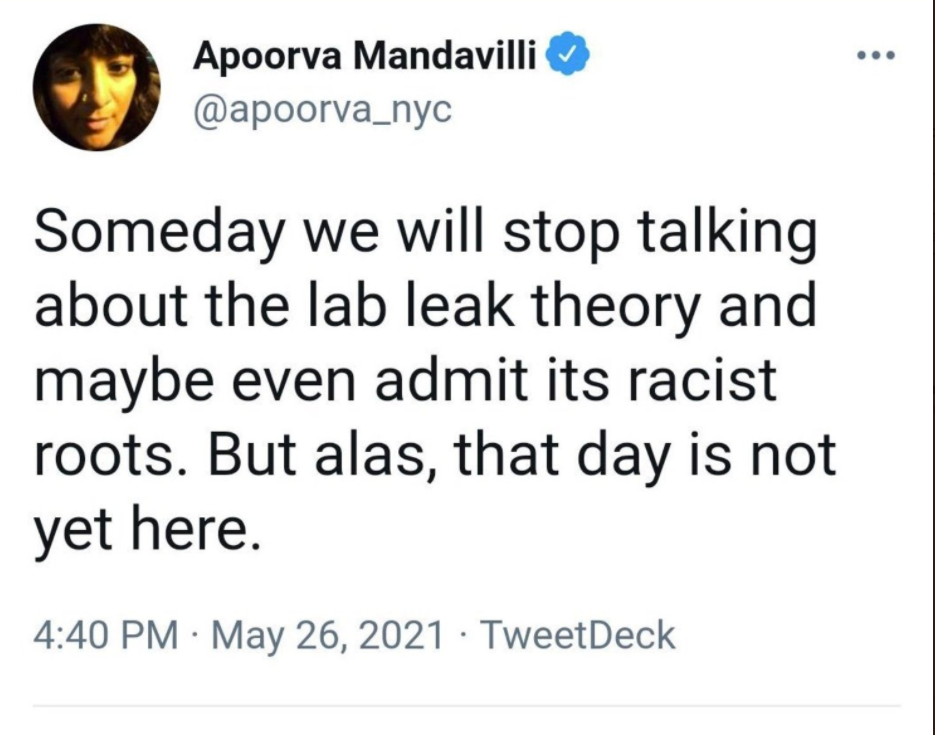 Mandavilli’s Wednesday morning tweet comes just two days after the Wall Street Journal report that three researchers at the Wuhan Institute of Virology were hospitalized with COVID-like symptoms in the fall of 2019, around the time the first cases were reported.

Mandavilli’s tweet suggests that journalists, international bodies, and the U.S. government shouldn’t make an effort to explore the lab-leak theory, despite there being just as much evidence to support it as any other origin theory.

Last February, a Times news article accused Cotton of repeating a “fringe” understanding of how the COVID pandemic began and said his questions about the Wuhan lab were giving credence to a “conspiracy” theory.

New York Times Washington correspondent Maggie Haberman, appearing on CNN on Tuesday, blamed the Trump administration for the faulty coverage of the lab-leak theory, suggesting that it had made the question “political.”

Mandavilli deleted her original tweet, purporting to “hate deleting tweets” while characterizing the response as “ridiculous.”

“Lots of clown emojis (is that code beyond just calling me a clown), allusions to CCP and also: is ‘fronting corporate interests’ the new ‘pharma shill” insult?” she asked.

Mandavilli has also doubled down on her original point, declaring that “a theory can have racist roots and still gather reasonable supporters along the way. Doesn’t make the roots any less racist or the theory any more convincing, though.”

Seventy-six percent said China should pay reparations to other nations if it is determined that it did cover up a lab leak.
Brittany Bernstein

The government's pandemic power grab should make us more skeptical of climate policy.
Kevin A. Hassett

Our system needs many fixes, but when it matters most, there's no better place to get sick.
Sally C. Pipes

Arguments to the contrary mistake the exception for the rule and wrongly align Jewish Americans with the regime that allows nearly unregulated abortions.
Howard Slugh, Tal Fortgang

What comes next for pro-lifers will be even harder.
Michael Brendan Dougherty

There's still time to stave off a Russian invasion of Ukraine, but the U.S. and its allies must show there will be consequences to such action.
The Editors

Jim Geraghty
As Ron DeSantis predicted, you may soon need a third booster shot to be considered ‘fully vaccinated’ against COVID-19.