New York Times sports writer Sopan Deb has accused conservatives of selective outrage on the issue of Chinese human rights abuses, but it wasn’t long ago that he himself covered their unified horror at the National Basketball Association’s (NBA) acquiescence to the People’s Republic of China (PRC).

On Thursday, Deb tweeted that “I know conservatives like selectively getting behind NBA players when it suits their political agenda. And [LeBron] James is a valid target. But when Tillman Fertitta, the Houston Rockets owner and GOP donor, slapped down Daryl Morey over the tweet, conservatives went silent.” When Morey, formerly the general manager of the Rockets, tweeted in support of protesters in Hong Kong in October 2019, James called Morey “either misinformed or not really educated on the situation.”

Fast forward to this week, and Deb was critiquing a tweet from Boston Celtics center Enes Kanter  aimed at superstar forward LeBron James’s infamous defense of the genocidal government, wondering aloud why Kanter was not going after two of his teammates who have endorsement deals with Nike, which does business in China.

When the Washington Examiner‘s Jerry Dunleavy explained Kanter’s focus on James thusly — “could be because LeBron is an international superstar and the face of the NBA who has criticized people who have criticized China” — Deb responded with his tweet about conservatives’ supposed selective support for human rights in China, citing the example of Fertitta, who worked to distance Morey’s position on Hong Kong from the Rockets’ as an organization.

However, at the time of James’s initial comments defending China, Deb covered conservatives’ widespread criticism of not just James, but the NBA, the Rockets, and commissioner Adam Silver, who works on behalf of the league’s owners and their interests. 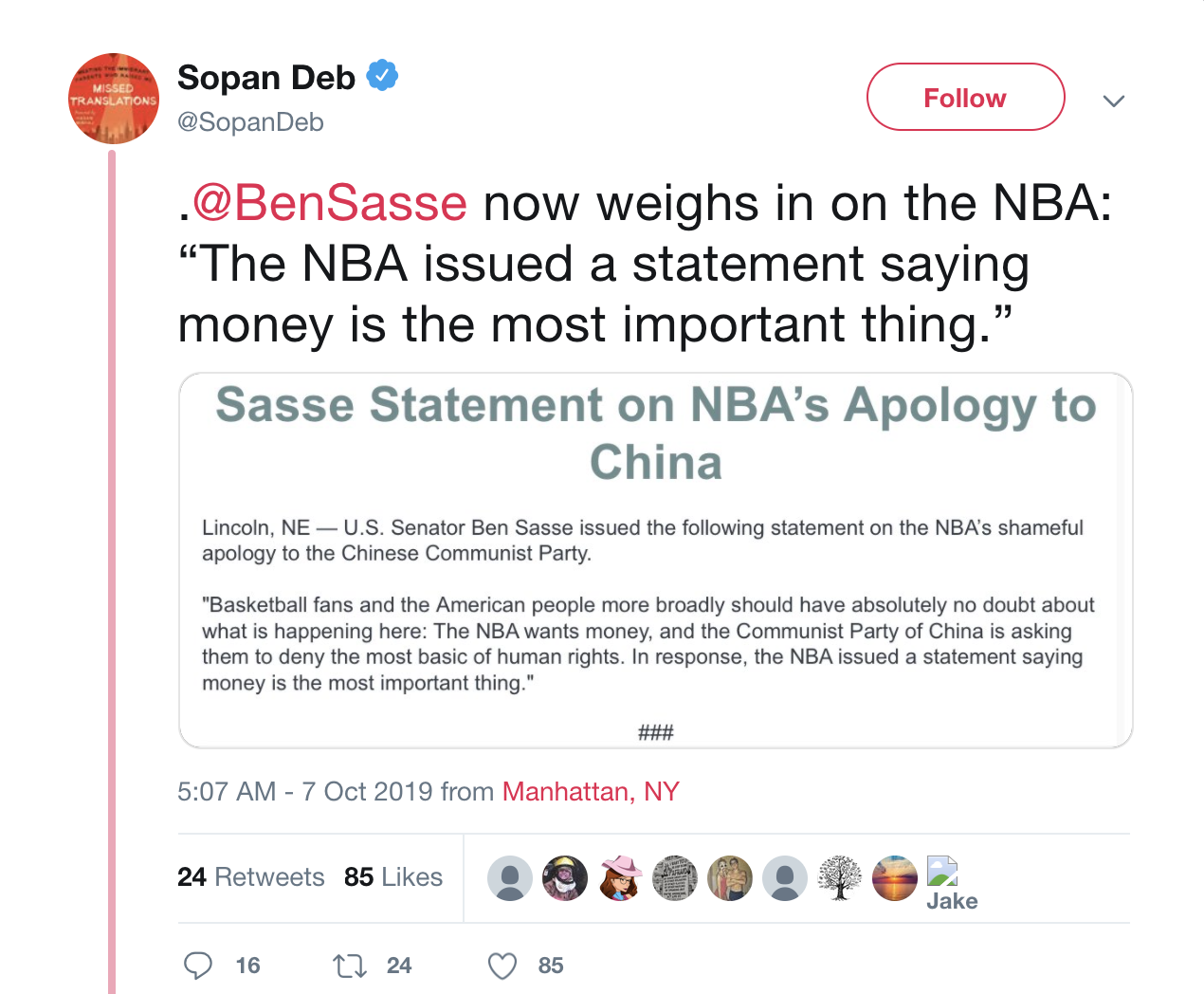 Senator Sasse not only authored a Washington Post op-ed lambasting the NBA’s “surrender” and arguing that “U.S. businesses must step up to the plate and aggressively confront China’s intimidation campaign,” but he also took the lead on putting together a bipartisan letter to Silver expressing a number of lawmakers’ “deep concern about the NBA’s and Houston Rockets’ recent statements.”

Notably, the letter was signed by Senator Ted Cruz of Texas, who Deb later claimed had not commented on Fertitta’s rebuke of Morey.

Senator Josh Hawley also penned a letter to Silver and the league’s 30 owners, advising that “the NBA and its owners…reverse course immediately” and “apologize to Mr. Morey.”

Senator Marco Rubio of Florida has remained a dogged critic of the NBA ever since Morey first expressed his support for protesters in Hong Kong, pressing Silver for answers about abusive NBA-affiliated camps in Xinjiang, where the Chinese government is presently prosecuting a genocide against Uyghur Muslims.

While James, as the most famous basketball player in the world, became an object of criticism for many Republicans, they reserved plenty of their fire for the league as well as the Rockets specifically, even if they didn’t name the relatively anonymous Fertitta. Deb’s own contemporaneous reporting made this plain.